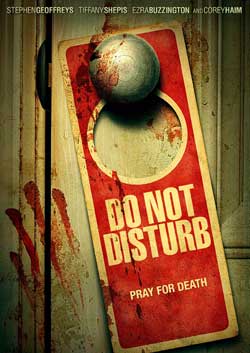 Holed up in a seedy hotel, Hollywood screenwriter Don Malek is writing about a bloodthirsty serial killer but he’s doing all of the research himself, by actually committing the murders!

I’m just gonna come out and say it, “Do Not Disturb” is one of the oddest movies I’ve seen this year. A really strange amalgamation of a serial killer flick and a character drama that feels like it’s being made up as it goes along, it takes place in a seedy hotel in Hollywood where the main protagonist, screenwriter Don Malek (Stephen Geoffreys), is working on a comeback of sorts. He was the talk of the town a few years back but because of an incident that took place involving a close friend, he shunned the Hollywood life and slowly disengaged himself from all that he once knew. Now living in a run down, seedy hotel known as the New Terminal, he still writes scripts and is being represented by Ava Collins (Tiffany Shepis). But the relationship the two of them share is an odd one and there’s a lot more going on here than the rest of the world knows. 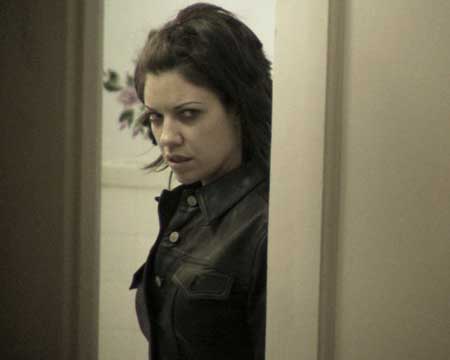 Don is researching his latest script, which is about a serial killer, by committing murders himself. As the film opens, we find him in his room with famed (but reviled) studio head Stanley Glissberg (Anthony Colliano). Glissberg is there snorting some cocaine and generally being a louse but Don oddly demurs when Stanley offers to share some of the nose candy with him. That’s because Don has spiked it with a drug that will immobilize Stanley yet keep him awake and aware of everything that’s going on around him. And everything that’s happening to him as well! After Stanley is properly immobilized and his kidney removed (!), Don places him in a bathtub filled with ice and that’s where Ava finds him when she comes to visit Don and harangue him about a script he’s promised her. Oddly enough, she doesn’t seem to fazed by the sight of a famous studio head lying in a tub filled with ice, trying to communicate with her. Don tells her it’s a re-enactment of a scene in his script and Stanley was nice enough to help him set it all up so that Ava can get an idea of the direction the promised script is taking. 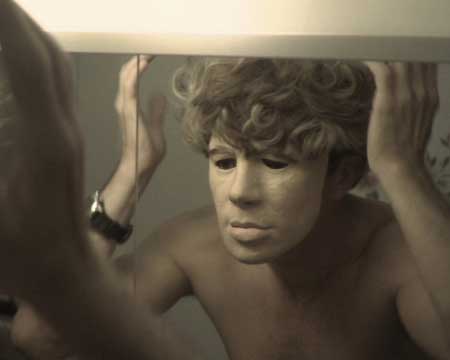 But it’s much more than that and Don does have a reason for doing what he’s done although the next murder he commits seems to be totally out of the blue. He murders his neighbor, Spitz (Ezra Buzzington, a perverted, alcoholic paraplegic who hires prostitutes and videotapes his escapades with them for posterity. Don does Spitz a favor and gets rid of a hooker that Spitz believes he’s killed after she slashes him for being too kinky and hurting her in the process. But not only is the hooker alive, she makes a deal with Don to kill Spitz instead! 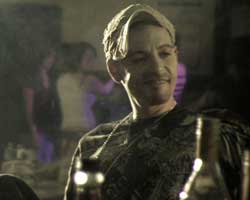 The film goes on like this for the majority of it’s running time. There’s a lot of verbal jousting that takes place between Don and Ava that seems ad libbed and downright strange to boot. It’s almost as if they’re reciting lines from a completely different script although both Geoffreys and Shepis seem to be having the time of their lives with their dialog whether it’s ad libbed or not. Characters get introduced, drop a few lines and are summarily eliminated or forgotten about completely but Director/Screenwriter BJ Furtney deserves kudos for keeping any of this entertaining because it really doesn’t seem to make much sense. 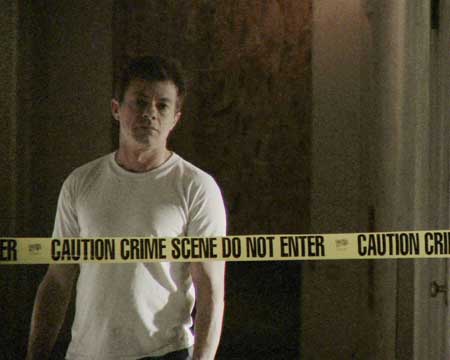 Looking like the result of a one night stand between Harvey Keitel and Kevin Spacey, Geoffreys (Evil Ed of “Fright Night”(1985) fame) is still doing his best imitation of Jack Nicholson but I’ll be damned if he doesn’t do it better than anyone else! His eyes have a dead stare that can be extremely unnerving when used in conjunction with that voice. He seems to be in a state of extreme exhaustion throughout the film yet he commits his murders with glee and reckless abandon and revels in their success. I think it’s fair to say that he makes looking lackadaisical and worn out downright scary! Tiffany Shepis is no stranger to anyone who is a regular visitor to Horrornews.net and she, as usual, doesn’t disappoint here either. Her portrayal of Ava highlights both the tough and the savvy components of the character that make her such a perfect foil for Malek. She’s a terrific actress and the fact that she’s easy on the eyes doesn’t hurt too much either. Buzzington also gives a really strong (if short lived) performance as Spitz, who quite literally spits out a lot of his dialog at the top of his lungs. He has a moment of weakness where he shows gratitude to Don for (supposedly) taking care of the hooker that mauled him that makes the character of Spitz feel like less of a prick and more of a human being. It’s a nicely nuanced moment showcasing the softer side of the character that doesn’t last too long but it’s memorable all the same. The late Corey Haim has an extended cameo (& a halfway decent British accent) as Jasper Crash, a lush who hangs around getting drunk and trying to make friends with anyone who’ll talk to him. In all honesty, Haim looks terrible here but his appearance fits the ambiance of the film and his character as well. Much to my surprise, all of the featured actors give pretty good performances in the film.

Furtney does a serviceable job behind the camera and manages to keep the movie looking fresh despite the fact that nearly all of it takes place in Malek’s room. The obvious low budget doesn’t distract the viewer from what’s going on and although it might look cheap, it doesn’t look bad. There’s a smattering of nudity and a bit of bloodshed but at times it seems like the film was being shot for a PG-13 rating, with the murders taking place just out of camera range as if to make them feel a little less violent yet the blood flies all over the place so I was a bit confused over what Furtney’s intentions were there. The expected plot twist isn’t really much of a surprise but the ending of the film is a bit disturbing. I felt like I was getting a first hand glimpse into the mind of a madman in the last thirty seconds of the film and I wasn’t expecting to feel that way at all.

“Do Not Disturb” isn’t a great film. In all honesty it isn’t even an especially good film, it’s far too disjointed and confusing to follow at times, but it’s not a terrible film either. It’s odd narrative structure and strong performances kept me engrossed throughout it’s running time and I wanted to know how it was all gonna end up for Don Malek & company and that’s not something I can say for every film I watch. The soundtrack (By Trevin Pinto) helps sell the madness as well. It sounds like a bunch of harmonizing bees were recorded and then played backwards over the proceedings and while that might not sound like much right now, it makes for an especially different kind of background music that feels like it was written by a madman for a madman. It fits perfectly here.

Like I said in the beginning of this review, “Do Not Disturb” is an odd little movie but despite it’s oddness and it’s laid back atmosphere it’s an effective movie. I don’t think it’s hardcore enough for the gore hounds amongst you and it’s not soft enough for those of you who feel faint at the sight of blood either. It fits right into that small niche of films that don’t fit comfortably into either one of those camps. Actually it feels like it’s created a small niche of it’s own, a really bizarre and confusing niche for sure but a unique one all the same.