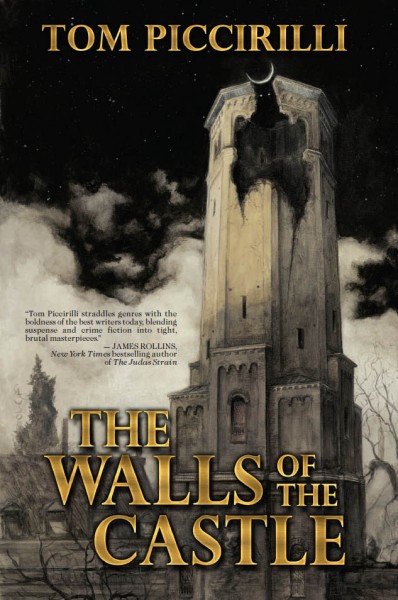 “He’d been waiting for the chance to cut somebody, to chop somebody up, to move up from steak and veal and pork ribs. Killer for morality, murderer for God, vicious for middle class America. Everybody just wanted the self-righteous excuse to maul somebody else, to threaten, to scare somebody the way they’d been scared their entire lives.”

I remember a couple years ago at Mo*Con, hearing Gary Braunbeck relate a bit of Piccirilli lore. Apparently, the man had mentioned a story that started with a man whose son had died a week before, but who couldn’t bear to leave the hospital. He related this in asking if it was a good start. I believe Braunbeck’s response was something along the lines of a rousing chorus of “Fuck You”s.  The Walls of the Castle appears to be that story and the f*ck yous seem perfectly warranted.

So, you’ve got a guy whose name is definitely not Kasteel but who has no idea what his name actually is. His son’s dead, but he can’t remember or figure out why. And he’s wandering the grounds of a centuries old hospital that spans two miles while fighting brutal orderlies, torture-crazy candystripers, murderous morticians, and other colorful characters like Don Quijote del Castillo. Then the ghosts, clowns and Angel of destruction come in.

Ever since he decided to start focusing on crime and noir, Tom’s writing has been relatively straight forward. He’s been doing it so long, I forgot what it was like when he decides to go weird on you. And this is certainly bizarre, though not in the bare-feet-licking-your-eyelids-while-floating-and-expounding-upon-dadaism of bizarro. Slipstream would be a bit closer, but it still doesn’t quite hit the effect.

But, regardless of the oddity, of the confusion, the humanity is there. You live for 77 pages in the head of a man broken by the strain between what he was and what he was almost able to be. A man whose little slice of hope was torn from him without reason. A man whose world has become meaningless and senseless because of it. Like any purging, the experience is neither kind, nor pleasant.

But that oddity, in this case, fits the tale. We aren’t just told about this collapse, but forced to experience it. To be as disoriented and confused as he is. Made to feel his desperation to make up for the one right thing, in a history of horrid wrongs, that he could not save from the mindless cruelty of the world.

What can I say, it’s Piccirilli.

As the first entry of a planned ten in Dark Region’s Black Labyrinth imprint, it is worth noting the difference you get in these books. Namely, the cover and interior artwork by Santiago Caruso, which is to be the calling card of all of the Black Labyrinth books. I’m a nut for interior artwork anyways (just look at my ravings in the Hiram Grange reviews). It adds so much to the impact of the story when done right. But Santiago does something special here. His work is as concrete and as ethereal and the words on the page. Images that initially seem only slightly off but become more bizarre the more you consider them.  Images that add to the story instead of simply replicating it. Hopefully the other books in the series are done this well.

Yep, fans of Pic’s newer work may well be turned off by this one and it isn’t quite the return to the gothic that old fans may have been waiting for. Also, it is extremely short, which may put other people off. Of course, if you are any of those people, I may be inclined to aim Braunbeck’s statement at you. I had a hell of a time here.