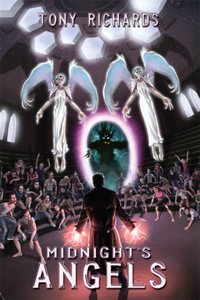 It may look like a perfectly ordinary New England town, a little larger than most. But Raine’s Landing, Massachusetts, holds some very dark secrets. The real witches of Salem fled here just before the Trials of 1692, and the place has been full of magic — the good and the bad kind — ever since. And a curse hangs over the whole population … there are so many people because nobody born here can ever leave.

Now the Landing is facing its worst peril yet, monstrous flying creatures in the service of an evil older than the Universe itself. They have an unpleasant way of possessing people to their side, and their powers keep on growing until little can withstand them. Most of the major adepts succumb … there are only two left to defend Raine’s Landing. And the town’s chief troubleshooter, ex-cop Ross Devries, has an enormous challenge on his hands. He needs to get his former sidekick, Cassie, back into the fight. And if they are to have any slightest chance of winning through, they’re going to have to make some very strange new friends, and new alliances to save Raine’s Landing, and save the world.

Midnight’s Angels is the third novel in the Raine’s Landing series, but the first one I have read. And I can tell you, I will be reading the first two sometime in the near future.

You don’t have to read the first two books to enjoy “Midnight’s Angels”. It does refer back to other “problems” in Raine’s Landing but in no way takes away from this story.

I really enjoyed “Midnight’s Angels”, being from New England and an hour away from Salem, MA I have always been interested and intrigued by the Salem Witch Trials. Tony Richards take on how the “real” witches escaped is an interesting and original concept, and he fully succeeds in bringing that idea to fruition with “Midnight’s Angels”.

I thought his characters, of which there are quite a few, were fully fleshed out and believable, with the main characters being one’s I came to really enjoy spending time with. When it comes to fiction for me, characters are first and foremost the most important factor in drawing me into the story, Mr. Richards characters are absolutely wonderful.

The action is fast and furious, with plenty of witchcraft, magic and supernatural beings. His writing is atmospheric and spooky, once you start you will find it hard to put it down. I stayed up late a few nights in a row, as I couldn’t wait to find out what happened next.

Dark Regions Press has another winner on its hands, as they seem to so often do and I highly recommend using the link above to order yourself a copy.