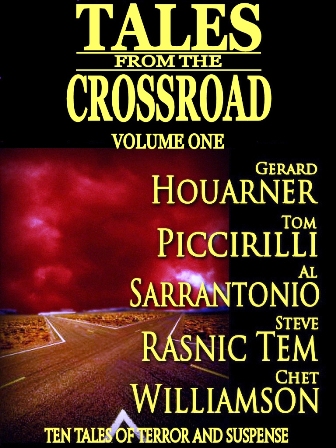 TALES FROM THE CROSSROAD

The world of publishing has changed, but while many companies are either trying to desperately to cope with these changes or coming up with new and exciting ways to exploit them, Crossroad Press is doing a damn fine job of showing how it can be done right. They’ve got a fairly extensive and consistently growing catalog of new and out of print ebooks available in all of the standard formats and have also caught on that audiobooks don’t have to be treated as a completely separate entity any more, so they have those too. Plumbing both the practically inaccessible past while lighting the way for the future, this is a company that gets it, and this collection is a marvelous example of that. It contains work from five incredibly talented and diverse authors, both new and old, giving a good sense of the type and quality of work they have on display. More importantly, all of the stories here grabbed me immediately and held me tight to my glowing screen.

Do I need to tell you that Tom Piccirilli is a damned genius at breaking hearts and portraying people caught on the edge of absolute oblivion? Whereas T-Pic usually presents us with character who believe themselves to be much more capable than they actually are, “The Woman in the Dark” gives us a man who finds within himself a strength and usefulness he never thought possible only after his world has crumbled and he has nothing left to lose or gain. There is as much heroism as the expected tragedy and the result is beautiful.

I’ve always loved Gerard Houarner’s knack for bringing ancient myths and monsters into modern situations, so “The Three Strangers” hit me right in the sweet spot with a tale of three pale men in black who expose the lurking filth beneath the squeaky veneer of much lauded small town America. However, it was “NOK” that really kicked me in the balls. If you only know him from the Dead Cat or Max books, this tale of isolation and dissolution will catch you off guard with its simple humanity, but that quality is what allowed it to sing through the softest spots in my armor.

Steve Resnic Tem. Once again, a name that you damn well should know by now. “The Unmasking” is a damn unnerving take on the Phantom of the Opera that hit me in all the wrong spots, in all the right ways and made my skin crawl a bit in places. Meanwhile, “How to Survive a Fire at the Greenmark” pulls off the razor wire trick of being absurdly hilarious and downright heartbreaking while exploring use, abuse, loss and personal identity.

I don’t know who the hell this Al Sarrantonio guy is, but even though “Simple” comes across as a tad derivative of The Wicker Man and that Stephen King story about the frogs, it’s effective and punchy as a mofo. “All Souls Day” then takes the motif of sacrifice and twists it into something that is as touching as it is brutal. Not bad, sir. Not bad at all.

Finally, I should hate Chet Williamson. The tone of his stories is way too stodgy and snooty for my usual tastes and I generally hate anything that hits my tongue as being this British feeling. That said, I adored both “Jeeves and the Deteriorating Relations” and “And So I Will Remember You”. “Jeeves” uses that snooty tone both as a way to inject humor and as a way to point to the useless idiocy of the narrator in a story that had me rolling around in laughter until the undercurrent of rage eventually set fire to the surrounding countryside. On the other end, “And So…” uses the austere language to craft a graceful and poetic ghost story that ends on positive note of the whole collection.

There were also snippets of other, longer works by the authors (also available through Crossroads Press, of course) presented but I didn’t read those. The complete stories were enough to have me sold and I really hate being teased, so I stopped before that point.

Yeah, I liked it. Buy it here.