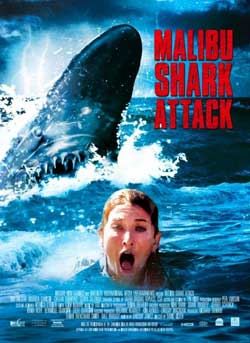 When a tsunami floods Malibu, it brings with it a hunting pack of deep-water, prehistoric goblin sharks that go after the lifeguards in their half-submerged station on stilts and a team of construction workers stranded in a flooded house.

Originally airing on the SYFY channel a few years back Malibu Shark Attack is one of many films that just makes you wonder what substances were being ingested by the cast & crew as they were making it. Don’t get me wrong…I understand the concept behind High Concept films but the central conceit in this movie was just too wide a river to cross for your old buddy The Black Saint.

Have you ever heard of the Goblin Shark? Well, neither have I but they are some fierce looking mofo’s with a bizarre blade like appendage sprouting forward from the top of their heads that make them especially scary denizens of the deep. In this film an underwater earthquake displaces a few of these bad boys from their preferred deep water hunting grounds to the surface and they find that people are a pretty tasty treat! But that darned earthquake has also set off a tsunami of epic proportions and the entire west coast is directly in it’s path! 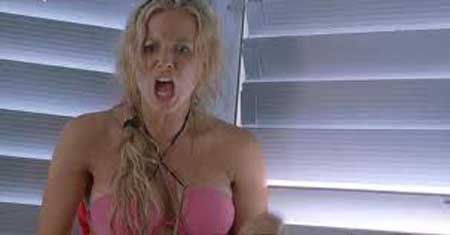 What to do, what to do? Well…seeing as the film essentially ignores the entire population of said coast (I’m figuring that millions of people just made sure they had their galoshes on beforehand), all we need to be concerned with are the dozen or so people who find themselves trapped in the few untenable situations the film sets them up for. The majority of those cast members are shark food anyway so the production focuses on a few lifeguards that not only see the dreaded tsunami headed right for them but manage to find shelter in what has to be the sturdiest lifeguard shack ever built! And when I say “Sturdiest” I mean this f*cker takes a direct hit from a 30 foot tidal wave and not only stays standing BUT the lifeguards in it don’t even drown when the wave washes over the structure.

let me elaborate on that last sentence just a bit more. The damned shack doesn’t even have proper glass windows! It has wooden shutters that had to be built of some strong ass timber because those f*ckers don’t even buckle a smidge under the force of millions of gallons of water crashing against them. Thanks to some handy stock footage we see that most of the west coast has been wiped out under the assault of the wayward H2O but this little shack? Maaaan…it’s the little shack that could! 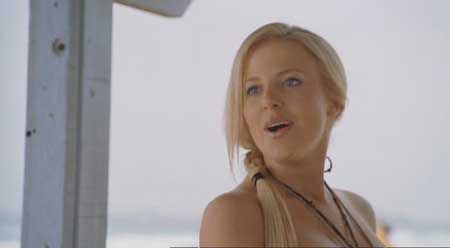 But it’s not all peaches and cream in the shack because it is basically submerged save for a few feet so that we can watch some actors pretend to be scared of some pretty crappy looking CGI sharks (although there are a few shots of actual Goblin sharks strewn about to make it all seem authentic). Among them are the standard cardboard cut out characters we’ve come to expect in a film like this: The couple who get engaged in the opening minutes of the film who are just destined to die. The lantern jawed hero who just gets shit done no matter what the cost to the rest of the cast is. The (especially dumb) blonde that screams throughout the film because she has what looks to be a minor paper cut. The one good looking guy with a rifle who gets shaky whenever a pretty lady is nearby. And Peta Wilson.

Peta Wilson was the star of TV’s La Femme Nikita (1997-2001) & a member of The League Of Extraordinary Gentlemen (2003) back in the day and she was a pretty kick ass heroine. She had attitude, looks and she could really kick some cinematic ass back then. So I had to wonder why she’s relegated to the sidelines here as a lifeguard who’s torn between her current boyfriend & her ex. She quite literally does nothing but furl her brow every so often and utter some nonsense about finding a way out yet she’s top billed in the cast. Why waste an established action star when you have her in your miserably stupid production I wonder? Actually what I’m really wondering is if Peta fired her agent after booking her in this catastrophe. 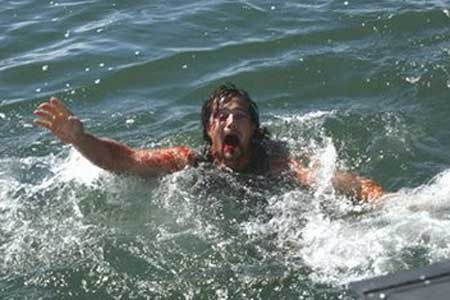 The film is just meanders from scene to scene with no tension whatsoever and some extremely underwhelming scenes of carnage. It’s neither scary or exciting and the CGI shark scenes are all repeated throughout the film as if the director thought no one would notice the same shark attack scene repeated ad nauseam (just from a few different angles). The actors do nothing to make us want to care about them or their fates and the CGI tsunami looked like a moderately sized mound of animated blue cotton candy languidly rolling towards the beach. In all seriousness, how fast could it be if everyone managed to get in that darn super cabin that stood up to it’s destructive force before it reached them? 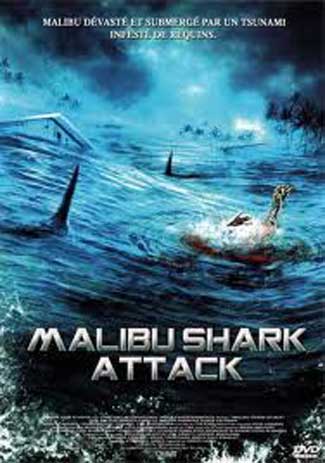 Movies like this one are made for the sole purpose of pissing me off. The wonky concept sounds silly yet it might’ve been fun in the right hands. The boatload of repetitive bad visual effects only made it more annoying & the less said about the actors, the better (but poor Peta does what she can here). After watching “Malibu Shark Attack” I can honestly say that I learned that if I ever wanted to live through a tsunami then Malibu is the place for me to do it because they know how to build shelters over there. But if surviving that tsunami meant that I’d have to watch films like this one I think I might just take my chances with the water. Some punishments are too harsh to face… 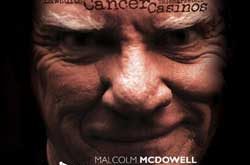