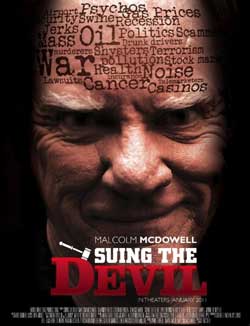 A down-and-out law student sues Satan for $8 trillion dollars. Satan appears to defend himself and the trial of the century takes place.

Luke O’Brien (Bart Bronson) is at his wits end. Blaming Satan for his mothers death and for all his misfortune, he has a revelation. This revelation begins with bringing the world to justice by suing Satan for 8 trillion dollars. “Suing the Devil” is a Christian comedy that while staying out of the horror genre is still rooted by default. The movie works in the same frame of other court dramas that sees a premise followed thru to the end. It’s drama is never tiring as the script works its way around the intricacies of dealing head on with the devil and his pride.

While the comedy here is Christian comedy, it still contains dark overtones that are meant as a subtle ongoing joke polished over with a deep seated Christian message. “Suing the Devil” never fails to make due on its promise by reaffirming its Christian message several times thruout the course of the storyline. It does give the devil a chance to do his best monologue under the acting talent of Malcolm McDowell.

Speaking of Malcolm McDowell, in his role as Satan…..Malcolm arrives in spades wearing his smuggest suit and selfish demeanor to full throttle. No, it never dips into pure evil acts or unnecessary FX driven theatrics. It does offer simple solutions to the much asked question…..prove it? This seems to be all that is needed when a smug white haired-man announces to the court that he is indeed Satan and has come to defend himself. 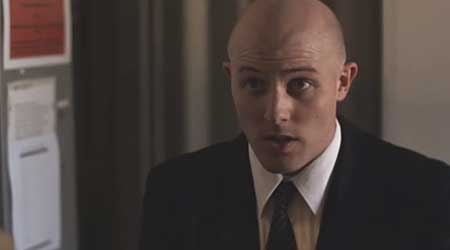 The film often injects humor by association such as an evil league of lawyers, or summoning the oil company up to the stand. We get a full variety of what the film views as “the” evils of our world played like a fiddle in the arena of decent minded humor. 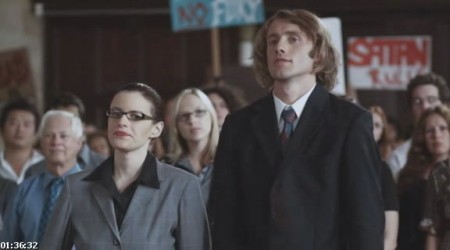 Luke O’Brien is our defender. More important, in the context of this film, a defender to the world for all of Satan’s misgivings, evil deeds and suffering invoked. His life has been ordinary up till now. His former career as a salesman never quite worked out and his ambitions to be a law student are limited to a local night school. When he announces that he is suing Satan, instead of getting the assumed default, he is given a chance to serve a summons to Satan himself. This begins our story which yanks the king of lies right out of the abyss and into the courtroom.

It is soon clear who the real star performance here is as McDowell is given a perfect chance to invoke his best lines in a manner that rolls from his tongue like he was born to. Bart Bronson is projected as our underdog who despite delivering much of the Lord’s message is often overshadowed under the performance of his peers.

Scriptures are delivered in the courtroom to produce an reaction from Satan, but not to the point of being “too” Christian that it will alienate movie goers. I believe many will enjoy the sarcasm and absurdity here laughing with the devil while getting where this movies true intentions are. 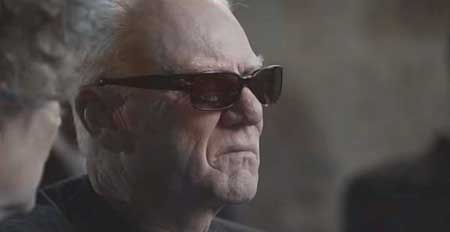 “Suing the Devil” is a nice change of pace for viewers who have exhausted themselves on evil possession movies. Influences might point a subtle nod to “Devil’s Advocate” and the 80’s “From the Hip”. So can the Christian audience AND horror fans find a common ground in this release? I believe so. It’s entertaining, well written and stills sends a powerful message to those who’ll listen.