The Twilight Zone: The Complete Third Season Now on DVD 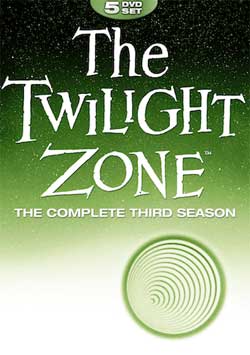 Image Entertainment, an RLJ Entertainment (NASDAQ: RLJE) brand, announces the release of the third season of Rod Serling’s groundbreaking, science fiction anthology The Twilight Zone: The Complete Third Season, available on DVD on July 9, 2013, at an SRP of $29.98. Season three features an incredible list of guest stars including Rod Serling, Robert Redford, Carol Burnett, Cliff Robertson, Charles Bronson, Leonard Nimoy, Elizabeth Montgomery, Dean Stockwell and Bill Mumy.
Limited copies are available for review.  ***Appreciate it if you could include this title in your “Available on DVD July 9, 2013” listings.
The Twilight Zone remains television’s most treasured anthology program.  The brainchild of writer and narrator Rod Serling — inspired by the pulp comics, novels and sci-fi films of his youth — the series introduced its own special brand of weirdness to viewers on October 2, 1959.  As a program that correctly billed itself as one “of shadow and substance, of things and ideas,” The Twilight Zone left indelible tracks — not to mention unforgettable theme music — and directors that included Don Medford, Douglas Heyes and Richard L. Bare.
All 37 episodes of the third season are included in this set: The Gift, Two, The Shelter, The Mirror, The Grave, It’s a Good Life, Deaths-Head Revisited, The Midnight Sun, Still Valley, The Jungle, Once Upon a Time, Five Characters in Search of an Exit, A Quality of Mercy, One More Pallbearer, Nothing in the Dark, The Hunt, Dead Man’s Shoes, Showdown with Rance McGrew, A Piano in the House, The Last Rites of Jeff Myrtlebank, To Serve Man, The Fugitive, Little Girl Lost, Person or Persons Unknown, The Little People and Four.
For more information, go to: www.image-entertainment.com/product/twilight-zone-the-complete-third-season-the/cbf2aa38-0e05-4028-b823-9d8800b19805.
Share