While most episodes are rather off the wall and odd to say the least, this episode has a more touching overtone. Of course, there is some eeriness to it, but it is held to a minimum. This tale, written by Serling and directed by Ron Winston, emerged as a powerful sentimental fable where magic is real only if believed. 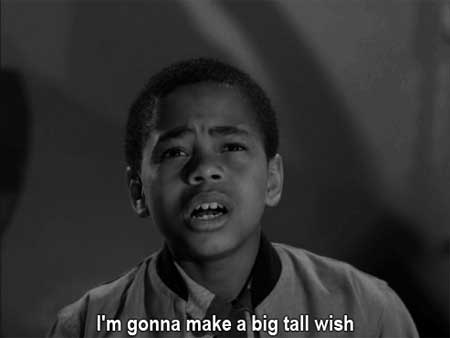 Archie Moore, a real life boxer, was originally slated for the lead. However, the filming pace proved to be too much and he was replaced by Ivan Dixon, who went on to become a Hogan’s Heroes regular.

And, as usual, there were issues, namely in keeping costs down during a crowded arena scene. Wanting the appearance and feel, but not wanting the cost of a few hundred extras, tricks were employed utilizing three actors, one eating popcorn, one clenching a fist and one looking through spread fingers. This, along with keeping the filming tight using only the reaching many numerous hands, gave the desired impression and the audience is none the wiser.

One last note: watch little Steven Perry’s acting. For a child, his performance is superb and will tug at heartstrings.

Bolie Jackson (Ivan Dixon) is a has been. A washed up prize fighter who refuses to quit. On the night of yet another brutal contest, adoring little Henry (Steven Perry) watches on as Bolie peers closely at his face in the mirror, tracing all the scars, dictating and pinpointing when they exactly occurred. Tonight he has hopes of winning and getting back on the track to where he once was. 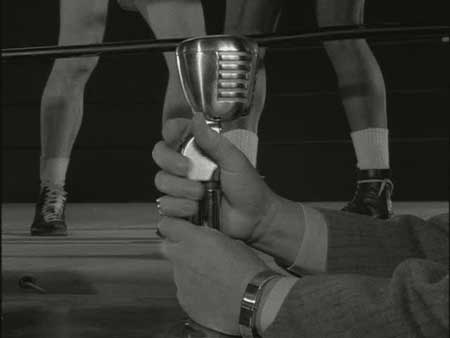 Henry tells him that he is going to make a big, tall wish for Bolie to win. Of course, the battered and beaten man doesn’t hold much faith in the wish, but does humor the lad.

In the dressing room before the fight, confronted by c**ky promoter Thomas (Henry Scott), Bolie is teased about his age and downfall. This angers Bolie and he punches a concrete block wall, breaking his hand.

His trainer Mizell (Walter Burke) is concerned and wants to call it off, but Bolie won’t hear of it and painfully slips into the gloves.

The fight is on and Bolie is knocked down. But, Henry has made the wish and suddenly, through a blurred haze, it is Bolie who is standing and the other fighter (Charles Horvath) who is down. The count hits ten and Bolie id declared the winner. 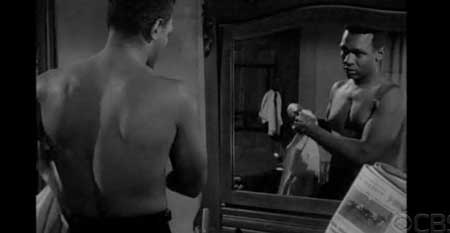 Accepting congratulations and pats on the back by those he passes as he enters the apartment building, Henry’s mother is waiting in the doorway too to offer her greeting and compliments. Bolie inquires whether Henry is still awake and finding out he is, pays him a visit.

Henry tells him that he made the wish; that it was magic and says that if he doesn’t believe, it won’t be true. But an unbelieving Bolie remains firm on thinking it was his own ability that won the fight.

The haze returns and Bolie is back in the ring being counted out.

Like déjà vu, Bolie is entering his apartment building, but this time there is no congratulations. He finds Henry on the rooftop and the boy tells him that he won’t be making anymore wishes; that he is too old and there isn’t no such thing as magic.

Bolie replies with “Maybe there is magic; maybe wishes too. I guess the trouble is, there’s not enough people around to believe.”

Next time – A Nice Place To Visit 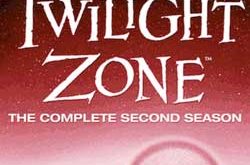