U.S. Capitol Police officer John Cale (Channing Tatum) looking to secure his dream job of joining the Secret Service – and to impress his estranged daughter, Emily (Joey King) – arrives at the White House for the interview just as a paramilitary group of terrorists attack and seize the building, including President James Sawyer (Jamie Foxx).

White House Down from director Roland (Godzilla, Independence Day, 2012) Emmerich is the guiltiest of guilty pleasures. On the surface, the script is the basest of action thrillers, derivative and predictable, complete with an unbalanced tone and numerous scenes that, when examined too closely, could easily be interpreted as egregious and offensive. However, the dialog is witty, the action is sharp and fast paced affording the film with an unusual light tone given the gravity of the premise resulting in a hilarious comedy of a thriller. So funny is the film that it is questionable at times whether the hilarity is intentional or a product of the absurdity abound. Regardless, the film ends up a delight provided a handful of key missteps can be overlooked. Tatum and Foxx turn in a satisfying buddy-picture pair of heroes with Foxx’s President Sawyer being a more-than-obvious caricature of President Barack Obama, and a damn fine one at that. If superheroes and superhero films are examples of wish fulfillment, then White House Down is Hollywood capitalizing on the 44th President’s popularity. The film is the perfect example of textbook action film, by the book, to the tee, hitting all the marks; it’s Emmerich’s best film since the equally patriotic Independence Day. 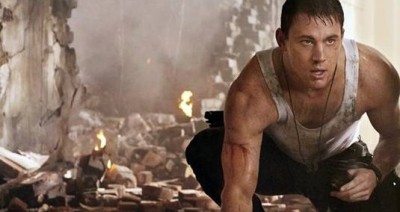 Unlike White House Down’s direct earlier released competition, Olympus Has Fallen, James (The Amazing Spider-Man) Vanderbilt’s script decides to keep the villainy close to home. Instead of the attack originating from foreign soil, Vanderbuilt devises a thinly veiled plot to overthrow the Presidency as a ragtag team of paramilitary mercenaries lead by turncoat Martin Walker (James Woods), head of the Secret Service over the Presidential Detail, and his head flunky, Email Stenz (Jason Clarke). While this seems like a major spoiler, do not be alarmed, it is well telegraphed in Woods’ opening scenes. While Walker and Stenz set their plans in motion, Tatum’s John Cale enters the White House, with his daughter Emily in tow, to interview for a job opportunity joining the Secret Service. While the interview does not go as planned, Cale desperate to impress his disapproving daughter, leads her to believing he still has a chance to work for the President and the pair end up on an impromptu tour of the White House. Before long, Stenz launches his attack, Cale and Emily get separated and Walker reveals his true nature to Present Sawyer. The film kicks into the tried-and-true Die Hard formula, complete with Jimmi Simpson replicating Clarence Gilyard’s computer hacker character, Theo. 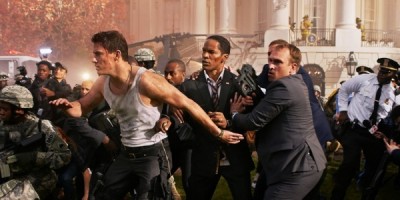 Many have tried to steal the reins of every man hero from Bruce Willis this year, including Gerard Butler in Olympus Has Fallen, but few have gotten closer that Channing Tatum. His John Cale (transparently sharing the first name as John McClane) trades witty quips for genuine concern for his trapped daughter and conflict of choosing to save his family or the President without having to sacrifice humor throughout. He also gets to sport the recognizable torn, bloodied and battered sleeveless white t-shirt, off the bad guys in action-hero style and save the day on National television. Tatum makes the most of it connecting warmly to both Foxx as President Sawyer and Joey King as Emily. The female cast swoon over him as well from Maggie Gyllenhaal as Carol Finnerty, lead Secret Service agent to his ex-wife Melanie (Rachelle Leferve) to the vice-president’s secretary (Jackie Geary). It may be unclear, but it is also possible that the Speaker of the House (Richard Jenkins), Walker and Present Sawyer are equally smitten as each character tends to act out of character in Cale’s presence. To his credit, Tatum handles the small, emotional beats with equal attention and charisma as the bigger action sequences. He is introduced having a silly conversation with a squirrel who is stealthily swiping seed from a large bird feeder. Between that and his teary-eyed appeals to his daughter and standing strong for his President and his country, Cale is the perfectly groomed American cinematic hero. 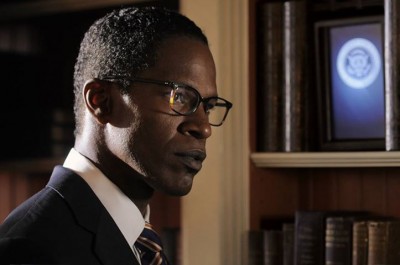 From the instant Jamie Foxx appears on screen, the purpose to his casting, wardrobe and acting is blatant and obvious. He is a broadly drawn variation on President Barack Obama and Foxx does the idea proud allowing him to be flawed but heroic, warm, friendly, as well as politically just and moral. When Garcelle Beauvais shows up as his wife Murial Walker, looking uncannily like the first lady, Michelle Obama, the idea becomes absurd producing laughs and sighs; however, it somehow maintains the concept in an inoffensive manner and tone remaining entertaining and lite. Foxx gets many of the best lines in the film from “Get your hands off my Jordans” to “I dropped the rocket launcher.” He also gets to be the hero as well fighting by Cale side. The chemistry he shares with Tatum comes across effortlessly and authentic from their first meeting where he leans in to whisper to Cale, “You shouldn’t lie to children.” 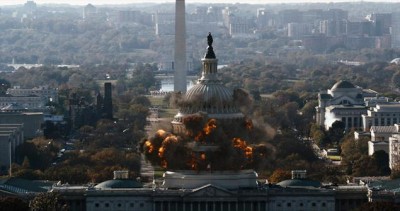 The film benefits from a well cast collection of characters despite how stereotypical most of the roles are. The bad guys are far less faceless villains in many similar summer action blockbusters. While James Woods channels his inner R. Lee Ermey sporting a permanent grimace and a flattop buzz cut, he does manage to give the film its closest approach to Hans (Alan Rickman) Gruber. One particular scene gives the part some weight, when Walker’s wife is drawn into the plot to confront the tyrant: for a moment, a complex inner conflict washes across his face, a look of despair and conscience that transforms into a wicked grin that signifies hopelessness for the film’s heroes. Joel Clarke is Walker’s right hand man, Emil Stenz who brings the films its most serious role, its true villain. In an effort to validate the pair, like most successfully rendered villains, they both believe in what they are doing no matter how dastardly they actions may be. This leads to a brilliantly rewarding final fight between Tatum’s Cale and Clarke’s Stenz that has the audience cheering upon its conclusion, rivaling WIllis’ disposing of both Richman’s Gruber and Alexander Godunov’s Karl in Die Hard. Even the less characters have lasting appeal, such as Falk Hentschel as Motts and Jimmi Simpson as computer hacker Skip Tyler. 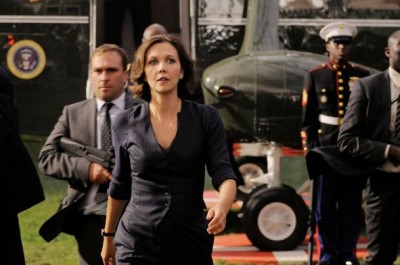 The great character actor Richard Jenkins (Let Me In, Cabin in the Woods) bridges the gap between the bad guys and the good guys as Eli Raphelson, the Speaker of the House. He excels in the role bringing it just the duplicity it needs to succeed. Maggie Gyllenhaal is excellent in her role as Carol Finnerty, second in command of the Secret Service directly under Woods’ Walker. She provides the character with far more concern and empathy than the script suggests. She also keeps the dryer scenes in the Pentagon interesting, invested and lively. Having Lance Reddick opposing her as General Caulfield does not hurt either. Joey King is the gem in the crowd however, portraying Cale’s young daughter Emily. She is feisty, smart and rebellious, ofter being forced to stand her ground opposite the heaviest of heavies with guns pointed directly at her, turning what could be an uncomfortable or offensive scene into one of young courage that ignites the audiences emotions. In a comic turn, similar to Reginald VelJohnson’s Sgt. Al Powell, again from Die Hard, Nicolas Wright essays the comedic relief in the film as Donnie, the White House Tour Guide. 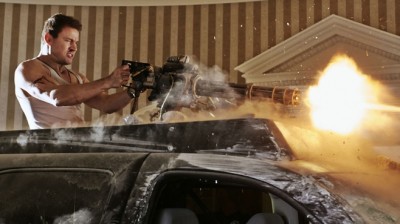 Roland Emmerich has delivered a number of successful summer, big-budgeted successful films. Some are still classics, such as Independence Day while others are despised by many, such as Godzilla, or were just overblown excuses for mass destruction, devastation and spectacle, such as The Day After Tomorrow and 2012. White House Down is the closest he has come to replicating the energy and tone of arguably his best film, Independence Day – he even tossed a reference to the movie into the dialog. This is by far his most restrained film in years. It is also his more comical. He knows how much to show, when to turn the camera away leaving the rest to the imagination and when to show the effects in all their glory. When Air Force one is shot down, the camera focuses on the artillery approaching and connecting with its target but allows the all-but-destroyed plane drift into a cloud bank, shifting the frame back to the crowds in the street and in the Pentagon. He still gets the opportunity to destroy as many famous buildings in White House Down as he has in many of his previous films – in his hands, it still has impact as he’s learned to have it play out in the background as much as it does in full view. In ID4, the White House is destroyed in a ball of explosions in full frame; in White House Down, the Capital Building crumbles in the background as Finnerty drives away or on TV screens. More so than his previous films, he laces the film with a light sense of humor, witty dialog and brief, but significant, character moments. 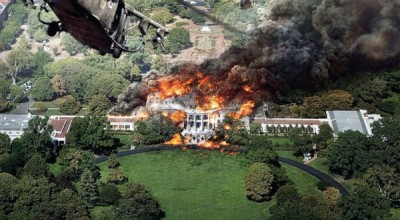 One of the strangest feelings may be determining if the film being shown is funny because it was meant to be or if the laughs are totally unintentional. White House Down could easily be described as a comedy as it is an action film. It is often laugh out loud hilarious. Given the serious nature of the plot, this is a bit off-putting at first. It takes a bit for the film to find its comedic footing after the military forces attack. The film has the President needing to replace his footwear early in the scuffle and while doing so has to decide between his usual attire and a pair of Jordans. This provides a humorous visual contradiction and a one-liner gag shortly after. Another scene has a rear-propeller blade crashing into the White House ending its crashing walk across the floor in the face of Donnie, the White House tour guide just inches from his face, just as it lift his tie off his chest. It’s a perfectly timed and executed visual gag. The film is full of these, giving the film an odd but ultimately effective balance against its more serious tone. The film has to portray its bad guys as a serious threat – and it certainly does that with explosions, deaths and guns, some pointed directly at our lead characters’ heads. If it didn’t do that, the villains would be silly. It’s a tough feat and Emmerich manages to pull it off. 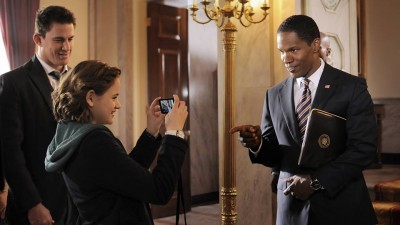 White House Down is everything it needs to be, a witty, epic, action-packed thriller. A damn funny film too, thanks to its smart script and instant bro-mance chemistry between Channing Tatum and Jamie Foxx. Roland Emmerich finally rediscovers the magic he injected into his first films, such as Independence Day, pulls back the reins and delivers his best movie in years. White House Down gives Hollywood its closest successor to Bruce Willis’ John McClane with John Cale. The script, the director and the cast combine to hit all the marks in what is essentially a by-the-formula Summer action film. In what promised to be a disastrous disaster film, White House Down proves an excellent time in the theater out of the heat. It is hard to say it is a great film, but it is a great time – a guilty pleasure.

3.5 out of 5
White House Down (2013) is now available on bluray per Sony Pictures Entertainment