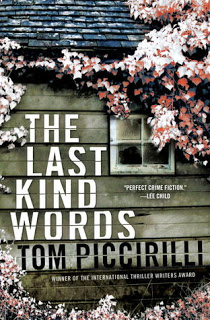 “The last kind words ever spoken to Jesus were spoken by a thief.”

Normally, I’d start off with some kind of hook, a generalized statement that ties into my feelings about the book being reviewed. Summary. A well reasoned list of pro’s and con’s. Professional and clean, if a bit self-conscious at times.

That’s not what you’re getting today, because this isn’t that kind of book.

The back flap breakdown would have you believe that this is a story of a man forced to return home to a broken family of crooks and thieves. Faced with the brutality of his brother’s murder spree, he’s been asked to find the killer of the one person his brother didn’t kill. A murder mystery wrapped in the barbs of crime fiction curled in the velvet black drapes of noir.

But that is also not what you are getting today, because it isn’t that type of book.

It’s not really about any of those things, at least not to me. To me, this is a tale of the sicknesses and sins floating in blood, embedded in flesh. It’s about a man’s struggle to find out if he is bound to the same fate as his family, if genetics, like anatomy, is truly destiny. The murderous brother who went mad dog one night and killed an old woman, a family of five (their little daughter included). The history of graft and theft running generations deep. The dementia whose roots have all but mushed the brains of the family’s eldest and have begun to worm their way into the younger ones as well. These things that our dear, humble narrator wants so desperately to believe he can extricate himself from but fears with just as much certainty that he cannot escape.

It says so much about the effect of Piccirilli’s writing on me that I cannot remove myself from it, that I can only speak of it in terms of myself. That’s why I, quite frankly, ride his nuts as if they are my favorite stallion. His writing is always so intensely personal, that it becomes personal to me. Here is this man whom I have never met, who knows nothing about me, yet whose words seem to understand the deepest fears and hopes bursting inside of me.

Its a bit scary, really.

I’ll just end with saying that The Last Kind Words resonates against my own experiences in ways I don’t care to share with strangers, but it’s there all the same. There will be those of you put off by the first person narration and the somewhat overwrought and bruise-purple prose but my own experience was sublime in the truest, most Longinus(ian?) sense of the word.