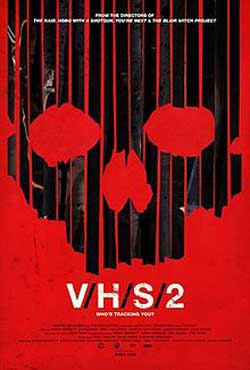 Magnet Releasing & The Collective in association with Bloody Disgusting

Searching for a missing student, two private investigators break into his abandoned house and find another collection of mysterious VHS tapes. In viewing the horrific contents of each cassette, they realize there may be terrifying motives behind the student’s disappearance.

The following synopses are in order of segment appearance in the film.

Logline: A private investigator and his girlfriend are hired to find a missing college student and instead discover a stack of mysterious videotapes in his seemingly abandoned house.

Synopsis: Larry, an ethically challenged private investigator who documents every step of his investigations on video, and Ayesha, his colleague and girlfriend, are hired by a woman to locate her son, Kyle, a college student who has been missing for over a week. Once Larry and Ayesha break into Kyle’s house, they find it seemingly abandoned, except for stacks of videotapes and a laptop computer showing a webcam video of Kyle addressing a mysterious group of online tape collectors. As Larry explores the house, searching for clues to Kyle’s disappearance, Ayesha begins watching the videotapes, each of which contains bizarre evidence of supernatural events.

Logline: A young man’s recently installed retinal implant causes him to see the ghosts of people he has wronged, driving him to desperate measures.

Synopsis: Herman Middleton lost one of his eyes in a car accident in which the other driver and his passenger lost their lives. Now he is the recipient of an experimental retinal implant, giving him a partially bionic eye that sends signals to a chip in the visual cortex of his brain, as well as recording the footage to a memory chip in the eye itself so that it can later be tested by its manufacturer. Unfortunately, Herman Middleton’s bionic eye is seeing people who aren’t there, people who he knows are dead. When a troubled young woman named Clarissa appears at Herman’s house with an explanation, he discovers the ghosts he is seeing may be more harmful to him than he realized.