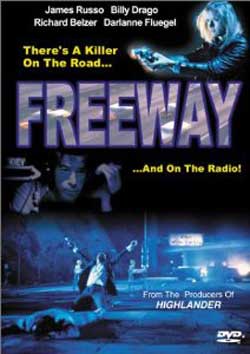 A deeply-disturbed priest goes on a murderous night-time rampage across America’s highways.

Up till recently, Freeway (1988) was as obscure as they come as far a locating a digital…or let alone DVD copy.  While this serial killer film doesn’t necessarily fall into the greatest top 10 list, its absence has made it more desirable than its creation. Probably part of the problem was that it sports the same name as the 1996 film “Freeway” starring Reese Witherspoon (a film that went on to be a cult classic favorite with fans). The Freeway (1988)title was always trumped and overshadowed by the Witherspoon / Sutherland release.

For a missing 80’s film, it still has its share of top name actors which includes the likes of James Russo, and Richard Belzer. Though my fondest recollection here is of actor Billy Drago playing the role of highway serial killer Edward Anthony Heller. Now if that’s a spoiler, well most would probably be able to guess right off the bat as they show his trademark eyes accompanied by his signature raspy voice. I think I most remember this film for the simple fact that Drago “seems” like the kind of actor that would be “perfect” for this role (and he is). Drago emits a creepiness, pure and simple, so playing a serial killer didn’t feel much pf a stretch. 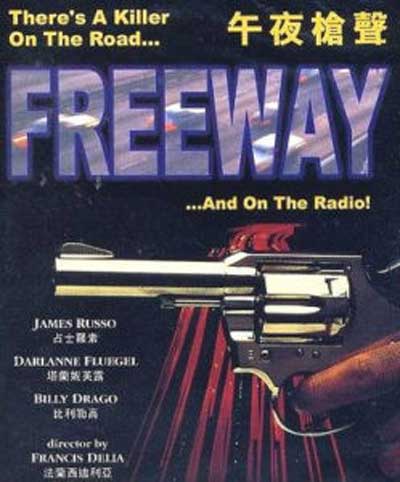 Getting into the plot points, there has been rash of serial freeway killings over the L. A. highways. More specifically there have been several homicides that the local detectives have “sort of” turned a blind eye to “as” serial killing related murders. One woman, Sarah ‘Sunny’ Harper (Darlanne Fluegel), a local trauma nurse has been following these killings (seeing that many come thru her hospital) and is intent on seeing the highway killer caught. Her husband, a young doctor, was a recent victim who was shot in the head a year earlier while driving on the same freeway. 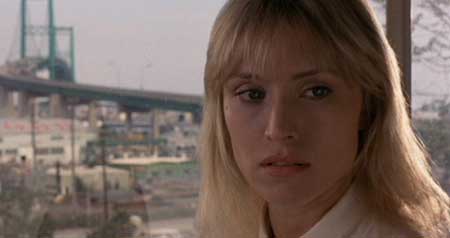 This approach is pretty much the norm here as Heller speeds up behind drivers, and then shoots them cold blood in the head while they are in transit. Heller also has a fascination with the bible and calling in to a local talk radio show hosted by Dr. David Lazarus (Richard Belzer) to spit off chants and biblical nonsense. Heller regards himself as sort of a soldier doing the Lord’s work (even though it’s his efforts are obviously quite misguided). The trend increases as calls come in, deaths pile up and Drago relishes in playing the perfect bad man for us viewers. 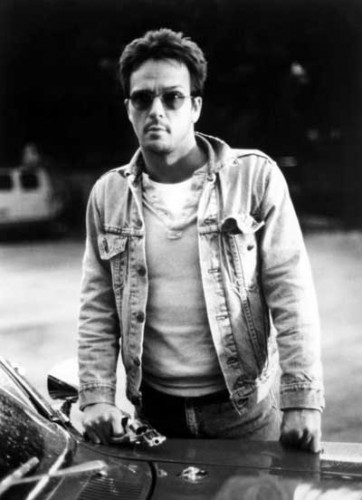 Now as Heller begins to realize that Harper is on his trail, he quickly ramps up the killings with Harper as his new prime target. This sets the stage for the final stand-off moments. The film itself is pretty predicable with the love interest between ex-cop Frank Quinn (James Russo) and Sunny feeling also like a notch in the “saw it coming” department. Nothing here really screams great script, great story…though it does have many 80’s trade markings that makes it a serial killer retro title for that era. I’m guessing though that the actual reports of freeway killings during that era also had something to do with the creation need of this film. What else can we say here? Drago stays in the shadows most of the film till the end fashioning a black car that almost at times makes this a “car” horror movie except for the fact that this time there is an actual driver behind the wheel. 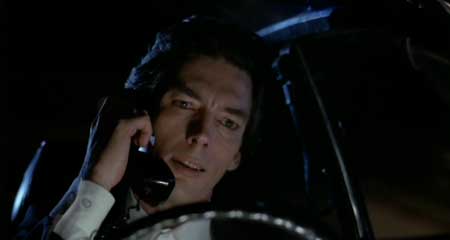 Good new folks, directed by Francis Delia this missing film seems to have been resurrected and is now available on Amazon. It’s not 80’s best, but it does have a film place within the old serial killer films that deserves a viewing and a place next to your Hannibal films. I personally love to see forgotten titles find new life in the digital realm seeing that most of us have discarded our VHS players and tapes.