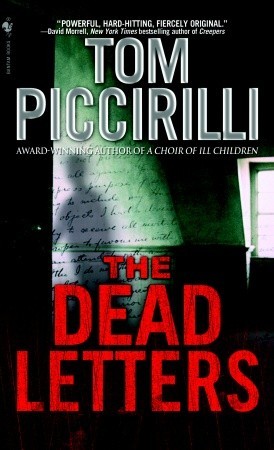 The Last Whisper in the Dark (his followup to The Last Kind Words), I thought it might be nice to take a look aback at one of my favorite books from the man. Then tear the flesh off its bones so I can watch its heart beat while all joy flutters away. I tend to do those this. Of course, since I’m analyzing the work, there will be massive spoilers. Please buy the book and read it, if you haven’t already, before continuing.

Like all of Tom Piccirilli books, The Dead Letters is a hell of a read. The suspense is intense, the writing style evocative and positively devastating at times and the characters are mythic yet grounded. Unfortunately, far too many years spent working on a lit degree will not allow me to simply leave it at that. Why is it good? Why did I need coming back to this story of all of his works? Certainly, it doesn’t work as a mystery, since there is no way to be able to figure out the identity of the killer independently of being told near the end. NO, there has to be something more to it that just being entertaining, something deeper, or that damn piece of paper is even more worthless than my bank account tells me every day.

Maybe it’s in the way that he treats the roles of “hero” and “villain”. It’s obvious that we‘re expected side with Whitt from the get-go, as the poor father of a murdered child, while Killjoy is the murderer of said mini person. The roles seem pretty clear until Pic begins to f*ck around with us. Killjoy’s letters have a grand, airy feel to them, as if they were written by someone who exists beyond the petty, restrictive mores and  understanding of us mere mortals. Plus, he stopped killing and has begun taking children from abusive families, giving them to the parents of his former victims. Meanwhile, Whitt is shown to be an obsessive ass, dwelling on the ruin of his life and refusing to move on. His quest for vengeance is like a hurricane, oblivious to the destruction it leaves in its wake. We seem to be looking at a Moby Dickish tale of the destructiveness of obsession and vengeance, a kind of Nietzschean fable warning of the dangers of fighting monsters.

But really, who gives a rat’s ass, right? It’s a tired and empty, clichéd approach to morality that’s been run into the ground too damn often, even assuming we are nice enough to ignore the White Whale taking a dump in the living room. Besides, this falls apart the second we begin to follow Killjoy’s own existentialist dictum that “words are deficient, even impractical, when attempting to convey the substance of true (modest) self. Deed is definition.”

With this in mind, it’s impossible to escape the image of killjoy as pure human evil. It’s important to remember that, despite his flowery prose and recent good deeds, this is a man who has murdered children, suffocating them in their own beds. He’s an obsessive, pathological serial killer who not only took the lives of those children but also destroyed the lives of everyone who cared about them. Just in case we wish to say that he has put aside his murderous ways and is redeeming himself through saving other children, Mike reminds us of an important aspect of the psychology of serial killers: they “by definition, are compulsive. They do not stop killing. They’re incapable of diverting or diminishing their obsessions.” His unwillingness to actually change is later reinforced in one of his letters to Whitt wherein he discusses the dangers of the “lures of normalcy.”

Even his attempts at redemption prove empty and meaningless. His mention of seeing “the hands of God in all things” speaks of a determination to not take responsibility for his own actions, instead attributing them to God, fate or anything that isn’t him. Further, he quite clearly has no interest in truly atoning for his crimes, he simply wants them to be forgiven and forgotten. Hence his offers of changeling children instead of turning himself in. His fear of being made to pay for his sins is palpable in his threat to Whitt: “Don’t cross me, Whitt. Bring the child home. Watch her grow. Find your wife. Resolve your world. Revert.” Revert… just pretend nothing happened. Whatever you do, please stop chasing me because I’m pretty sure I know what you want to do to me if you catch me.

Not only is Killjoy evil, but he is evil in a small, petty way. Just look at the behavior addressed in the last paragraph, like a child trying to lie or cajole his way out of his punishment. Worse still is his motivation for killing these kids: jealousy. The real targets were the parents, people Killjoy had seen living the joyful, contented lives he felt himself entitled to. He explains it to Whitt after being found out :“I spotted you in the park that day, six years ago. You looked happy. I hated that more than you’ll ever know, Eddie. I despised and envied your elation, your mirth… With a beautiful wife and a gorgeous baby daughter… I wanted to steal your happiness.” He murdered these people’s children and destroyed their lives because they had something he wanted. He may be evil, but he is also that most pathetic form of life: a hater.

Of course, Whitt did hang onto his vendetta with his own brand of compulsive obsession but we can also see why. His reasoning comes across strongest in his altercation with Mary over her anticipation of a new child. His forcing her to remember what was taken from her, what was done to her and her child, brought back her own resolve, her determination to see Killjoy punished. However, he’s a bit more direct about it when talking to his friend and godfather of his dead daughter: “You looked like you were going to jump down into the grave with her, but I did it. You understand? I’m there. I have to be there with my girl or I can never catch her killer.”

Maybe that’s the point here, that we can’t let ourselves get muddled in our own attempts to complicate what is often a simple issue. Maybe sometimes an asshole is just an asshole no matter what their reasons are and they need to be treated accordingly. I can’t help thinking that Killjoy only gave up his own child so that he would be freed from his own joy, allowing him to revert himself. Thus, in the reality of this story, Whitt’s obsessiveness is not only what allowed him to stay focused but is also that factor that led to the end of Killjoy’s actions. So maybe Tom is telling us that we need to be less willing to let the past stay there and stick to our stubborn-ass guns a bit more.

That’s what makes The Dead Letters an act of genius instead of simply being a damn good book. Pic used the backdrop of a gorgeous noir/crime/mystery novel to draw us into what he seems to see as a problematic world-view wrapped in the cozy shell of a trite literary conceit. Then he has managed to use this conceit against us to point out exactly where he sees problems with it while inserting a far more bleak, but no less reasonable, alternative.