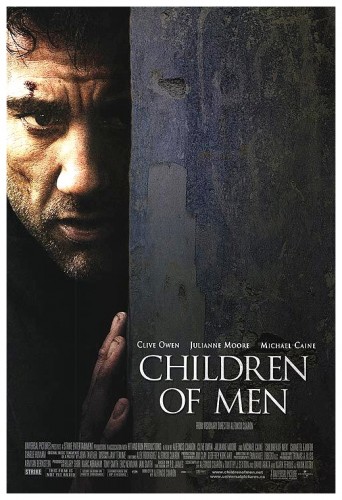 SYNOPSIS:
“World divisions, chaos and anarchy, these are the ways the world and the last remaining inhabitants are checking out. No child has been born for eighteen years. Human life and its moral self is eroding into extinction. Set in Britain in the year 2027, this is Theodore Faron finding his ghosts coming back to haunt his fruitless life, in the form of an underground band of rebels The Fishes. Unwittingly drawn into their plight, learning who can be trusted, who can be dependable, and how he must hold the most precious secret the Human race has been so longing to hear, the miracle that can change the course of Humanity; the first pregnant woman in eighteen years. On the run he, Kee and Miriam must travel cross-country, on the run, terrified and helpless to the safe haven of the Human Project. With the help of aging hippie Jasper Palmer this horrific, dark, unconventional and uncompromising road movie is all that is left between the demise of the Human race and the birth of a new dawn.” (courtesy IMDB)

REVIEW:
The cinema sub-genre known as the ‘Post-Holocaust’ movie has proved to be one of the most vital film forms, and reached its peak during the seventies and early eighties, a logical progression of the mid-seventies ‘Disaster’ cycle of movies. There is a kind of exhilaration in imagining the greyness of our society with all its bureaucratic worries going up in smoke, until all that remains is the odd rusted girder or faded magazine, especially if the emphasis is not on the holocaust itself but the new beginnings afterwards. These are nearly always seen as having vitality and energy along with cruelty and barbarism, and interesting oppositions along these lines are often set up. Relevant films from the period are Glen And Randa (1971), Damnation Alley (1977), Virus (1980), Mad Max II The Road Warrior (1981), The Last Chase (1981), Malevil (1982), Battletruck (1982) and The Ultimate Warrior (1975). 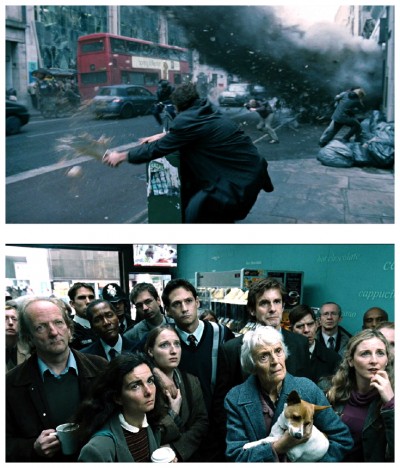 It has long been a Hollywood tradition that when the hero is pursued by a horde of villains he should be accompanied by a young woman who stumbles and sprains her ankle at a crucial moment. However, in The Ultimate Warrior, Yul Brynner is saddled with a young woman who chooses such a moment to give birth to a baby. Not that this slows Brynner down more than a moment or two. Not even pausing to gather towels or boil water, he delivers the baby in about five seconds flat then calmly dispatches several of his attackers with the same knife he has just used to cut the umbilical cord. Set in a post-holocaust New York where rival groups struggle to survive amid the ruins of a once great civilisation, the film stars Brynner as, essentially, a samurai hired to protect one such group. He ends up escorting pregnant Joanna Miles and a packet of desperately important un-mutated plant seeds through the wreckage of the subway system to freedom. 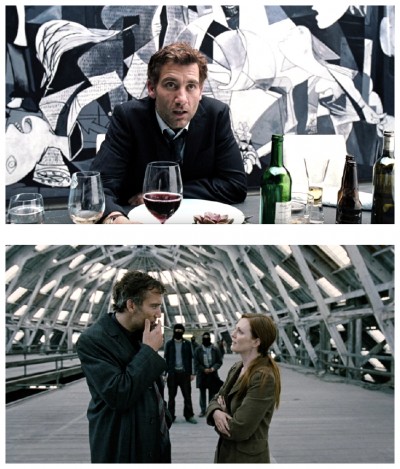 A rather conventional action movie with uninspired performances, The Ultimate Warrior flopped at the box-office, but it is a surprisingly good science fiction story. Uncompromising, cynical, unpretentious, well-written and directed by Robert Clouse, providing a hard-edged image of what society might look like after a sterilising plague. Most refreshing is its lack of sentimentality – even the so-called ‘good guys’ are capable of great callousness. Three decades later the award-winning film Children Of Men (2006), like The Ultimate Warrior, also believes in individual action or activism as an antidote against the out-of-control corporate capitalism that has polluted the environment and poisoned humanity in search of profit. But unlike The Ultimate Warrior, Children Of Men rejects simplistic answers. There are no absolutist utopian solutions, and no sheer dystopic nihilism either. Instead, the film celebrates mankind just for being the unpredictable, life-loving, meaning-seeking creatures that they are. 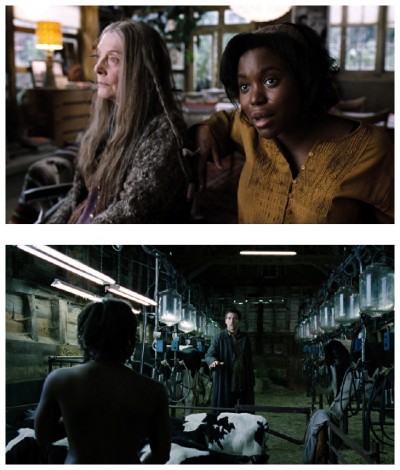 The year is 2027. After eighteen years of human infertility, civilisation is collapsing as mankind faces extinction. The only stable nation left with a functioning government is Britain, which is swamped by asylum seekers fleeing the chaos which has taken hold in most countries around the world. Britain is now a police state under martial law, and authorities are rounding up immigrants. Former activist-turned-bureaucrat Theo Faron (Clive Owen) is kidnapped by a militant group known as the Fishes, led by Theo’s ex-wife Julian Taylor (Julianne Moore). Julian needs transit papers for a young refugee named Kee (Clare-Hope Ashitey), which Theo obtains, but the bearer must be accompanied, so Theo agrees to escort Kee. Driving to the coast to catch a ship to freedom, Julian is fatally shot when they are ambushed by an armed gang, but they manage to escape to a safe house. We soon discover that Kee is the only known pregnant woman on Earth and she’s being delivered to a scientific group in Portugal called The Human Project, dedicated to curing infertility. 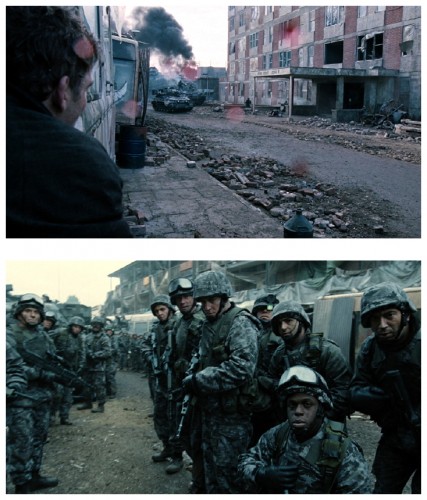 They steal a car and escape to the secluded hideaway of Theo’s old hippie friend Jasper (Michael Caine), where a plan is formulated to board the Human Project ship due to arrive at an offshore refugee camp, and it’s Jasper’s job to smuggle them in. Unfortunately, the Fishes track them down and Jasper stays behind to stall them but, before escaping with Kee, Theo witnesses Jasper’s murder. They are transported to the refugee camp disguised as prisoners, and Kee is beginning to get contractions. At the camp, they meet Marichka (Oana Pellea), a Romani woman who provides a room where Kee gives birth to a girl. The next day war breaks out between the army and the refugees. In the ensuing chaos, the Fishes capture Kee and the baby, but Theo tracks them to an apartment under heavy fire from the military and escorts her out. Awed by the sight of a real live baby, the combatants temporarily stop fighting, enabling our heroes to escape to a rowboat in a sewer. From a safe distance they watch the bombing of the refugee camp, and Theo reveals that he was fatally shot during the fighting. “Keep her close” is Theo’s final advice to Kee and her child, passing away just as the Human Project ship approaches through the fog. 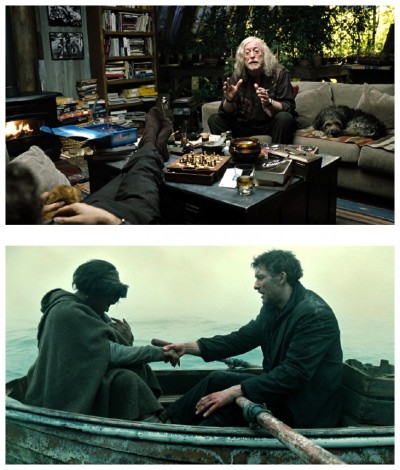 Children Of Men is certainly a bravura piece of film-making, utilising several lengthy single-shot sequences in which extremely complex actions take place, like when Kee gives birth (three minutes plus), the ambush (four minutes plus) and when Theo is captured by the Fishes and escapes (six minutes plus). It’s almost as if the filmmakers have bitten off more than they can chew, as each scene conjures up allegorical or political overtones, from the food and energy crises and the war on terror, via refugee camps and popular uprisings, to religious metaphors: Theo (the Greek root word for ‘God’) first sees that Kee is pregnant while in a barn among farm animals and, when Theo sees her give birth, he swears “Jesus Christ!” Kee jokes that she’s a virgin, and Theo is seen washing or soaking his feet several times. But these references never stand in the way of a fast-paced twisting plot that keeps viewers captivated. After all, everything is connected in this world, so it only makes sense to portray it as such. 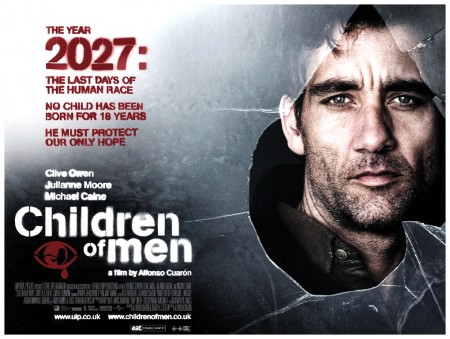 Based on the award-winning novel The Children Of Men by P.D. James (who cameos in the film as an old lady in the cafe), the first version of the script was written by Paul Chart, then went through several rewrites by screenwriters David Arata, Mark Fergus, Hawk Otsby, Timothy Sexton, director Alfonso Cuarón and actor Clive Owen. Children Of Men pleads for a world that downscales – any organisation that exceeds direct interpersonal contact (nations, conglomerates, the media) should be considered suspicious – but at the same time the audience is challenged: “Do we love humanity enough to save it?” With that question in mind I’ll now make my farewells, and remind you that it’s vitally important that you join me for next week’s edition of Horror News, because an old blind woman told me that if you don’t read all my reviews from now on, the entire world would be devoured by an enormous Star-Goat. Normally I’m highly skeptical of such claims, but she seemed so certain, I feel we’d best not take the risk. So enjoy your week, and remember, the survival of the entire world depends on you. Toodles! 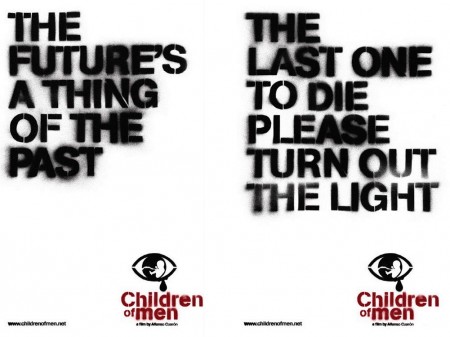