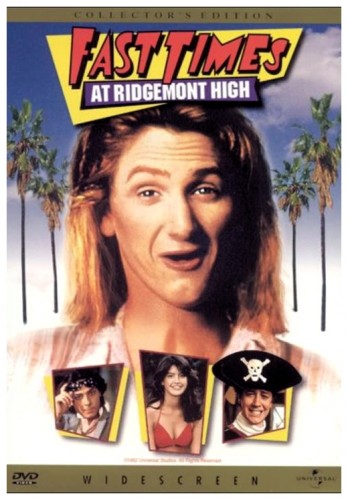 “Follows a group of high school students growing up in southern California, based on the real-life adventures chronicled by Cameron Crowe. Stacy Hamilton and Mark Ratner are looking for a love interest, and are helped along by their older classmates, Linda Barrett and Mike Damone, respectively. The centre of the film is held by Jeff Spicoli, a perpetually stoned surfer dude who faces off with the resolute Mister Hand, who is convinced that everyone is on dope.” (courtesy IMDB)

Back in the seventies, Rolling Stone reporter Cameron Crowe used his youthful looks to pose as a high school student to get the dirt on what teenagers do for kicks. Crowe wrote the screenplay for Fast Times At Ridgemont High (1982) based on his own novel, and shows about as much special ‘insight’ as one would have hanging out at the local mall for an hour. Directed by first-timer Amy Heckerling, Fast Times At Ridgemont High was considered to be a bold and racy teen flick with an incredible cast of stars-to-be: Sean Penn, Jennifer Jason Leigh, Judge Reinhold, Robert Romanus, Forest Whitaker, Anthony Edwards, Eric Stoltz and Nicolas Cage. Nowadays, as the typical teen comedy moves into another phase of self-deprecation and crass humour, movies like Fast Times At Ridgemont High are timely reminders of when words like ‘talented’ and ‘teenagers’ co-existed harmoniously side-by-side. 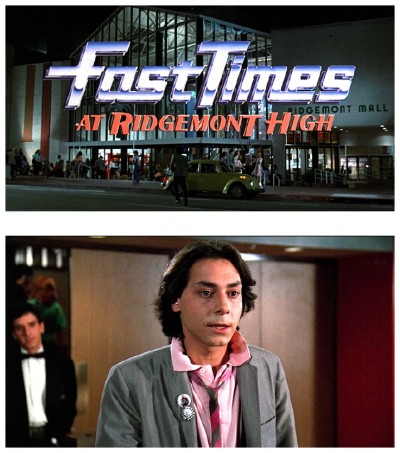 Amy Heckerling‘s sleeper hit helped to kick-off a decade of sexually explicit movies aimed at itchy adolescents, and the rather dated fashions and soundtrack consistently adds to the movie’s non-threatening warmth. Valley Girl Stacy (Jennifer Jason Leigh) is inconceivably interested in the short-and-nerdy Mark (Brian Backer), and he’s interested in her, which does make sense. But they’re both too shy to make sexual advances. Stacy takes advice from her sexually experienced best friend Linda (Phoebe Cates), and Brian listens to his hustler friend Mike (Robert Romanus). The advice basically screws them up. Every time the film begins to fulfill its initial promise, we are frustrated – just like our two lead characters. 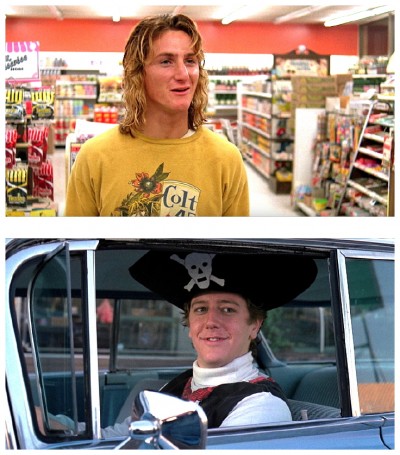 We also meet Brad (Judge Reinhold) and Brad’s bud (Nicolas Cage). If you take the time to isolate Nicolas Cage in the only clear full-faced sighting of him, you’ll see him looking extremely miserable. Of course, his character is supposed to be extremely miserable: He’s a high school student making ends meet by flipping patties at a fast-food joint called The All-American Burger, where your meal is one hundred percent guaranteed – until you complain, that is. His role was so small, the character didn’t even have a name. He’s listed simply as ‘Brad’s Bud’ meaning he’s the buddy of the joint’s assistant manager. You can briefly see Cage in several crowd scenes too: School registration, at the football game, at the graduation dance, breaking an egg into a skillet with one hand…and there’s that one shot of him looking miserable. But I digress. 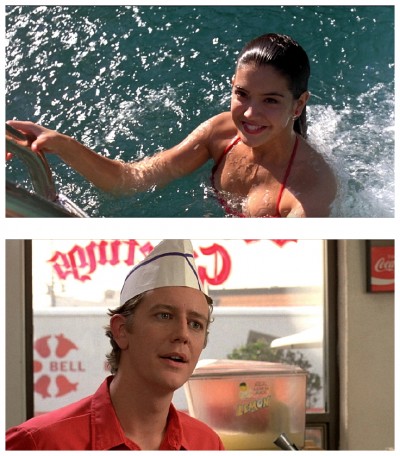 Better is the scene in which Stacy loses her virginity in an unromantic baseball dugout. Sex is presented negatively, but only because the males are insensitive unskilled lovers. More palatable than the sex scenes are the verbal duels between stoned Jeff Spicoli (Sean Penn) and the sarcastic rule-conscious teacher Mister Hand (Ray Walston). Together they are downright hilarious and are the main reason to see the film. At the centre of the movie is the crooked-grinning Spicoli, who arrives on-screen with an infectious dopey smile and maintains an innocent – albeit hazy – outlook that beautifully contrasts with the paranoia of a strict school disciplinarian. 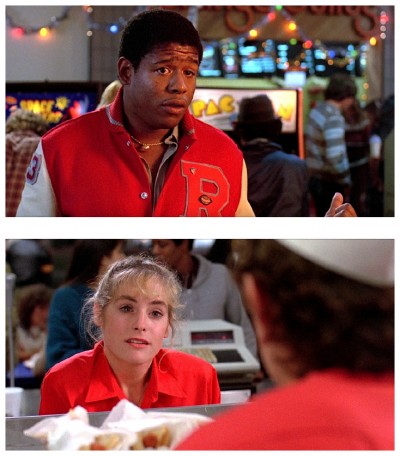 Penn’s performance as Spicoli set a new benchmark for screen stoners that has rarely been bettered. Phoebe Cates, on the other hand, set another benchmark entirely when she went topless in a scene that was recently voted one of the most popular celebrity nude scenes ever. Another pleasure to be found in this multi-stranded tale exploring teenage issues that are still very relevant today – sex, pregnancy, abortion – is the energy Heckerling harnesses from her young and soon-to-be-famous ensemble cast. 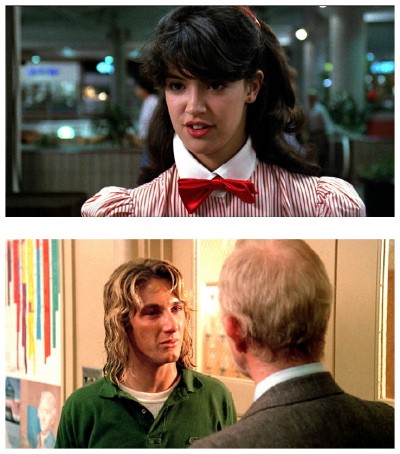 There’s also a couple of outstanding fantasy sequences imbued with an unusual intimacy (Reinhold masturbating over Cates while dressed in a suit, and Penn’s media interview flanked by two bikini-clad blondes) that perfectly capture the schism existing between two very different types of male characters. Adolescent innocence started disappearing from popular culture during the eighties with television programs like Degrassi High (1987), before culminating in the brutally frank apocalyptic urban visions like Larry Clark‘s Kids (1995). Unfortunately, the picture quality on the DVD I recently viewed hasn’t aged well, with visible grain and other film artefacts. Nevertheless, the film’s neon colours come up nicely and the black levels are good. The mono audio is adequate for the dialogue but doesn’t do justice to the vibrant pop-song soundtrack. 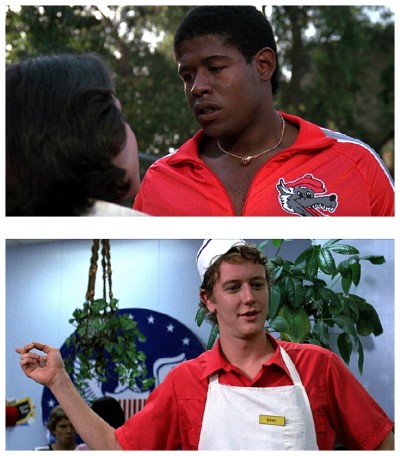 On the plus side, there was a recently produced featurette entitled Reliving Our Fast Times At Ridgemont High in which Heckerling and many of her cast and crew fondly recall their days at Ridgemont High. There’s also a highly amusing commentary (which keeps going for about fifteen minutes after the end credits have rolled) by Heckerling and Crowe that touches on everything from casting problems to the studio pressures they faced while making such an explicit teen comedy. They discuss the music and the studio-influenced compromises, revealing they had to replace Elvis Costello, Bruce Springsteen and AC/DC with more middle-of-the-road acts like Jimmy Buffett, Don Henley and Stevie Nicks. Crowe also mentions he first sent the script to David Lynch, who was genuinely amused by the screenplay but turned it down, saying it was not really his sort of material. 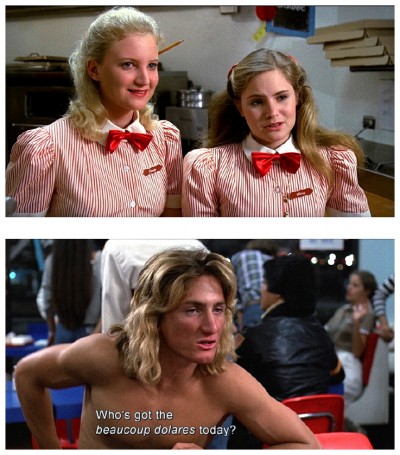 Fast Times At Ridgemont High can easily be dismissed as cinematic fast-food fodder, but it’s actually a cunningly entertaining studio product that captures the ups and downs of a life that feeds on the mistakes made by those willing to grow up far too quickly. It may not be perfect, but it’s miles ahead of its contemporary competition. Anyway, please join me next week so I can poke you in the eye with another frightful excursion to the backside of Hollywood, filmed in glorious 2-D black and white Regularscope for…Horror News! Toodles! 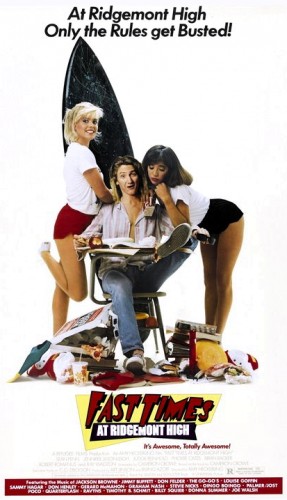