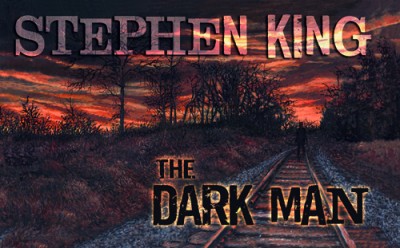 Cemetery Dance Publications is pleased to announce our World’s First Hardcover Edition of THE DARK MAN by Stephen King, which will be available in bookstores and libraries across America on July 30th.

The Dark Man has never seen the light of day beyond a few hardcore collectors of King’s college work, but many people consider it to be a prequel to King’s epic end of the world novel, THE STAND, because it stars the first appearance of Randall Flagg, one of King’s greatest villains.

This is a unique addition to the King canon, an eighty-eight page poem featuring extraordinarily detailed Glenn Chadbourne artwork on every page. We’ve taken this breathtaking poem and worked closely with acclaimed artist
Chadbourne to bring King’s chilling words to life in a unique way.

There was a very specific rhythm to the poem that we wanted to convey through the blending of the text and the artwork, and Chadbourne skillfully used his illustrations to create a new kind of mixed media story.

Feedback from early readers has been fantastic, with some saying they never expected a poem to make their heart race with terror and horror the way the ending of The Dark Man does.