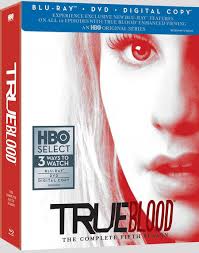 A vampire civil war is brewing, Sookie’s best friend is dead, and an old vampire foe has returned to wreak havoc on the human race. True Blood continues to be one of television’s most popular series and the wildly entertaining fifth season will be available on Blu-ray with DVD and Digital Copy (Blu-ray with HBO Select* $79.98), DVD ($59.99) and Digital Download on May 21, 2013. Both sets include the full 12-episode season, along with extensive bonus materials including exclusive interviews and never-before-seen content.

Called “fangtastic” (US Weekly) and “cheeky…great fun” (Variety.com), True Blood: The Complete Fifth Season finds Sookie triumphant over her climactic encounter with Marnie. However, her showdown with Debbie may have had fatal consequences for Tara. Meanwhile, the denizens of Bon Temps are approaching a new crisis with Russell Edgington, Bill and Eric are in deep with the Authority and new threats from unexpected sources loom.