This Tuesday brings the release of MAMA to blu-ray and the timing couldn’t be better because of course next Sunday Mother’s Day and what better way to let Mom know you love her than with a card with a creepy kid on it!

No worries, Universal has got you back and just made available a couple eCards featuring the creepy little girl from MAMA which you can send to Mom via their FACEBOOK page. Here’s what they look like. 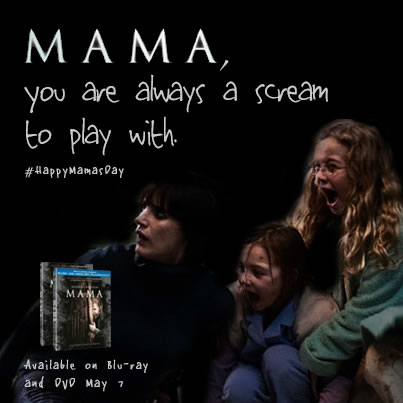 Along with the eCards there is also a lot of info on the release as well as a couple of video clips to get you all in the mood. You ready? Then lets do this: 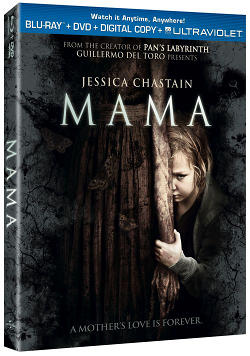 MAMA is the haunting tale of two little girls who vanish without a trace from their suburban neighborhood the day that their parents were killed. But when the young sisters are found alive years later in a decrepit cabin, their uncle (Coster-Waldau) and his girlfriend, Annabel (Chastain), take them in. As they try to introduce the children to a normal life, Annabel begins to wonder if the traumatized girls are the only guests they have welcomed into their home or if someone or something still wants to come tuck them in at night.

The Blu-ray™ Combo Pack allows fans to watch MAMA anytime, anywhere on the device of their choice. It includes a Blu-ray™ disc, a DVD, a Digital Copy and UltraViolet™ for the ultimate, complete viewing experience.
· Blu-ray™ disc unleashes the power of your HDTV and is the best way to watch movies at home, featuring perfect hi-def picture and perfect hi-def sound.
· Digital Copy provides fans with a choice of digital options to watch on devices such as iPhone®, iPad®, Android™, computers and more.
· DVD offers the flexibility and convenience of playing the movie in more places, both at home and while away.
· UltraViolet™ is a revolutionary new way for fans to collect their moves and TV shows in the cloud. UltraViolet™ lets consumers instantly stream and download to tablets, smartphones, computers and TVs. Now available in both the United States and Canada.