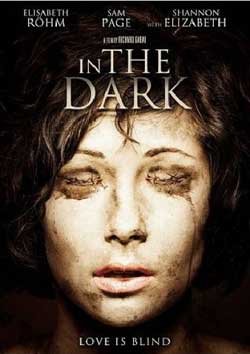 After an accident, a woman hires a caretaker to help her adjust to life as a blind woman. Before long, she is embroiled in a fight for her life. Will she learn to protect herself using her only remaining senses in time to save her life?

Allie Leer, played by Elisabeth Rohm, is having a fairly swell evening at the beginning of “In the Dark”. An already successful visual artist, her latest exhibit is going gangbusters, and she has a husband with really good hair, and a little girl so cherubic she looks like she was peeled from the ceiling in the Sistine chapel.

However lady luck leaves Allie’s side long enough for her to get into a car accident that kills her husband and daughter and leaves her totally blind. How this happens exactly is unclear, since we see Allie being taken away via ambulance after the supposedly fatality inducing crash with absolutely no blood or marks of any kind….hmmmm.

Anyways, six months later, determined to lead an independant life, Allie finally goes back to the home she once shared with her family. At the behest of her therapist, she agrees to allow an aide to help her adjust to her new, sightless life.

The aide, a young, cute man by the name of Jeffrey, gently guides her through her new world of darkness, and Allie begins to start her life anew.

Soon, however, Jeffrey’s sweet boy act begins to curdle around the edges and then go completely sour. 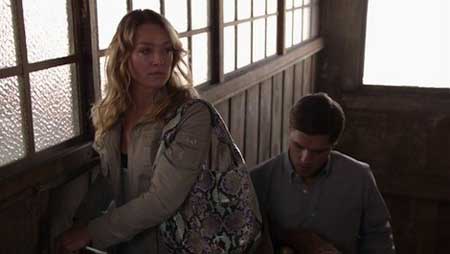 He takes a real shine to the pretty blind lady and soon becomes totally sexually obsessed with her. Fearing that her growing independence will mean he won’t get to be around her anymore, he starts doing things like move her furniture around so she bumps into it, and dosing her too heavily with her nighttime sleep aid.

What starts out as a thriller about infatuation quickly turns into a laughable montage of over the top stalker behaviour from Jeffrey. He pastes pictures of his own face into the framed photos of Allie’s deceased family, lurks around her apartment after she’s fallen asleep so he can root through her underwear drawer and rub her bras on his face.

One of the funnier moments features Jeffrey angrily smashing a bag of bagels after he discovers that Allie is having breakfast with her friend and neighbour, played by Shannon Elizabeth (and they said there was no life after “American Pie”) .

The hard cold reality is that the “I seem real nice but I’m really a crazy stalker trying to ruin your life” deal in movies has been done before..like, a lot. Despite the cast putting in a valiant effort (Rohm is particularly effective here) nothing hides the fact that the script is entirely unoriginal. Jeffrey seems to go from zero to batshit so fast that it can’t help but feel very forced. 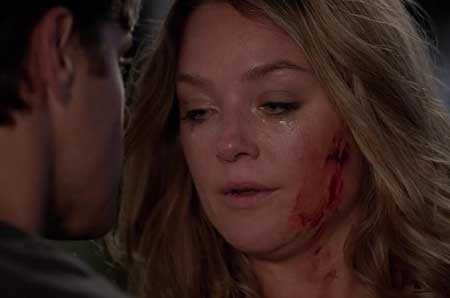 It also doesn’t help that there are so many moments of incredulity. Even though Allie is blind, it’s pretty hard to buy that she wouldn’t notice or sense Jeffrey standing a foot or so away from her as he films her showering. Also, at the risk of sounding bitchy (a risk I’m willing to take), for a supposedly renowned artist, Allie’s artwork is shockingly terrible. It’s hard to believe she mourns her former profession, when her work done before the accident looks like something a blind person would make.

There are some elements here, put in a more capable filmmakers hands, that could have been explored in order to bring something new to this already spun tale. Themes of vulnerability and voyeurism, safety and trust lurk in the darkened shadows, begging to be teased out into some fresher. It’s a shame though, that instead the film takes an emotionally hollow route that climaxes in a fairly predictable, yet weirdly camp crescendo.

I will say that the biggest contribution that this film makes is a very unintentionally funny scene involving homicide by casserole dish.

If you’re stumbling around for a film to watch, and your wild groping causes you to find this movie, do yourself a favour and turn a blind eye, better films are waiting for your eyes.