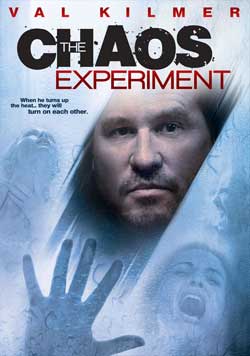 A former professor (Kilmer) concocts a brutal experiment in order to get the word out on the effects of global warming. By trapping six people in an urban Turkish bathhouse, he vows to overheat his hostages unless his global-warming hypothesis is published on the front page of his local paper.

Natural disasters seem to cause up a stir in cinematic ventures; from weather-related catastrophes breeds a new man-made debacle of global warming. Director Philippe Martinez depicts an entertaining film The Steam Experiment about the advent of 2012, and what would happen when we are made the choice whether to stick around and endure the heat or melt with anguish in the process. The pain of intense heat on six unknowing victims is almost hurtful to watch as we are forced to brave a scientist’s experimentation of the onset of global warming.

The story is set in the city of Grand Rapids, Michigan; where James Pettis (Val Kilmer) is being admitted back into the Farmington Mental Institute. Recurring flashbacks of carousel rides and racing thoughts through Pettis’s head leads one to believe that his mind is rushed and disconnected, while allowing the introduction into a psychological thriller theme. Pettis’s flashbacks play up the storyline of the movie, in which we are then taken to visions of the Grand Hotel, and also to the Grand Rapids Press where Pettis delivers an ultimatum: either publish his story about global warming on the front page of the newspaper or six innocent civilians will die in a steam bath. The effects of a one hundred-thirty degree steam bath are presented visually in words by Pettis, as he repeats the line, “lungs melt, eyes cauterize.”

Interestingly enough, the set up of a sauna-like torture chamber seems like a scene right out of the Saw series. Six strangers with back stories of grief and inner struggle to find themselves are taught firsthand what they are doing by depleting natural resources to cause the onset of global warming. In a brief introduction scene, all six victims give a short name and bio to help characterization develop slowly and the camera moves once again in a circular direction around each person.

When the steam heats up, emotions run wild as Pettis’s hypothesis is being trialed through pure human depravity. The first overwhelming feeling of the loss oxygen drives the victims into a “what to do know” type problem, and their reactions are all underlined within Pettis’s hypothesis. Whilst watching the downfall of six struggling prisoners, Pettis is shown being interrogated by Detective Mancini (Armand Assante). Pettis is portrayed as very intelligent, but very unkempt with long, shaggy hair and a scruffy beard to accompany. Mancini tries in every way to break Pettis to reveal where he is keeping his hostages, but Pettis in turn breaks Mancini with his uncanny ability of seeing right through him.

Even though The Steam Experiment falls under more in the genre of Drama/Thriller, the horror of an impending disaster of global warming brings fear to anyone who believes in the devastation of the year 2012. There is very few scenes blood and violence, but what little is shown is valued in the destruction of a human mind in complete desperation. All of the scenes of the movie are shot with a dark atmospheric setting, which also helps the characterization of Pettis as a dark-minded, psychopathic individual. The story-line is very believable, and gives the viewer a chance to reevaluate their own contribution to the onset of global warming.

The film also questions the sanity of the ones who believe in global warming; portraying the main protagonist of one suffering from mental calamity and being institutionalized. If Davis Guggenheim’s An Inconvenient Truth did not settle well for you as a non-fiction documentary of Al Gore’s fight to make global warming know, perhaps a fictional account of psychopathic protagonist James Pettis shown in The Steam Experiment may aide in entertainment value while learning a little thing or two about global warming.

The Steam Experiment (aka Chaos Experiment) (2009)