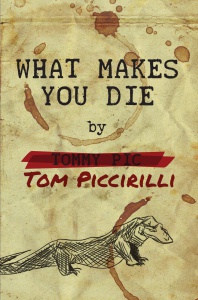 “TO SEE MORE IS TO FIND OBLIVION. THIS IS WHAT MAKES YOU DIE.”

Because it always feels so personal, it’s hard to separate Piccirilli’s work from the man himself. It certainly doesn’t help the situation when he names his first person narrator Tommy Pic. Of course, he knows that and I’m fairly certain that the bastard is intentionally messing with us (or, more pointedly, me)).

Of course, nothing seems particularly clear for Tommy, either. Ever since he belly flopped from near midlist stardom of a sort, he’s been black-out drunk, living in his mother’s basement and not able to sell a damn thing. We join him waking up in the boobyhatch, welcomed by friends and relatives who may or may not really be there and with no recollection of what he did. At least there is the script his agent is so excited about that he doesn’t remember writing and can’t seem to be able to read. Add an extinct Komodo dragon, witches, ghosts of kidnapped childhood friends and a several pints of Jameson and then try to find a way to continue writing what may very well save or destroy his career.

Needless to say, reality gets a little fuzzy between these pages.

I think it’s fair to say that What Makes You Die is intended to be a companion piece to Every Shallow Cut, which is explicitly referenced in a nice bit of Petey’s Blue Rose blues. Not so much a sequel to that story, but perhaps an answer to the questions raised within it. Or maybe it just raises more questions. It gets to be a bit of a sticky wicket there, but I’ll get to the navel gazing in a moment.

Like everything Pic writes, WMYD is intense, searing, heartfelt and honest. The desperation and need is palpable and a bit overwhelming at times. I adore how well he weaves the hallucinations through the reality, blending the two until it is almost impossible to tell where one ends and the other begins. As a reader, it ‘s hard not to feel like I became Tommy Pic for a while and that’s always a feat. Then all of this is conveyed with that odd combination of blunt force and poetic grace that Tom has developed over the years. As a simple piece of entertaining, if a tad emotional painful, fiction, it works wondrously. It may even be a tad less bleak than his work usually is.

Now for the navel: I mentioned my belief that Tom may very well be messing with us (me) earlier. The ebb and flow of hallucinations and objective experience, of irreality and reality, are so indistinguishable and this narrator is so incredibly unreliable that it’s hard to tell what has actually happened here. There is definitely a struggle to regain self and purpose and value but there is no clear way to tell how the struggle ends. Triumph and tragedy get muddled in the mixed mentality of our humble narrator to the point that our answer seems less like an answer and more like another question. I can’t be more specific that that without giving too much away.

But, this ambiguity of form and purpose is what kicked my ass here. His work has never been as simple as it seemed, but now… wow. There hasn’t been a doubt in my head for some years now and WMYD confirms my belief that Tom Piccirilli is one of the great literary writers of our generation. No bullshit hyperbole there, just an honest opinion. Whenever someone whines to me that we have no one nowadays that can stand next to Hemingway, Hughes, Shelly, Cervantes and their compatriots, I can point to this book and tell them to suck it.

If you want a quick, powerful and not quite fun but still entertaining read, it satisfies. If you want to dig deeper and get lost in the well, you can certainly do so. But I’ll end with what I was left mumbling into my pillow upon finishing this: “Fuck you, Pic. Thank you.”