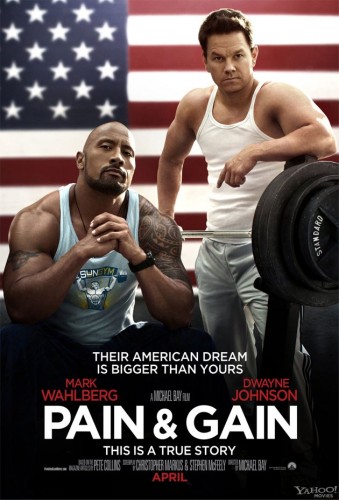 Michael Bay takes a break from his usual high-profile, high-octane summer blockbusters (Armageddon, Transformers) to tackle a smaller scaled, action comedy reminiscent of his first theatrical effort, Bad Boys (1995). The film takes a true crime story set in Miami, Florida and wraps it with action, comedy and satire seemingly to expose the absurdity of the common dream of getting everything for nothing. The story follows an inventive but simpleminded physical trainer at a Miami gym named Danial Lugo who decides the way to riches is rob one of his rich clients. Bay exploits the more unbelievable elements of the story, elevating each ludicrous act to high satire, poking fun at the criminals, the victims, the police and the American Dream – or at least, Daniel Lugo’s interpretation of the dream. Bay, along with stars Mark Wahlberg, Dwayne Johnson and Anthony Mackie, develop the leading trio of criminals into an oddly charming, but entirely lame brained, group of misguided friends. It’s their friendship, how they view and manipulate each other, that keeps the human elements within the spectacle far more interesting than the violence, bloodshed and chaos. Not every comedic aspect works, but Bay successfully balances the satire, the comedy and the action making Pain & Gain a hilarioius, biting and entertaining mixture of farce, action and tragedy. 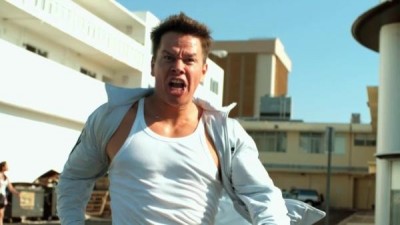 Mark Wahlberg is at is his best as Daniel Lugo, the body builder who hatches a creative but incredibly stupid plan to steal money from one of his richest clients. His character wants it all, feels that he deserves it all and, most of all, wants Victor Kershaw to lose it all. He is self absorbed, self centered and self important. Lugo is also completely charismatic, much like the self-help gurus he admires, such as Johnny Wu (Ken Jeong). He cons his boss into a promotion and his best friends into becoming criminals. This may be Wahlberg’s best performance since Boogie Nights…okay, okay, since Ted. Regardless, he excels at playing the meat-head, the simple but brainless dolt who has big dreams, a big heart and a big mouth. It’s to Wahlberg’s credit that he makes Lugo so charismatic and sympathetic but never casts him as the hero or righteous. His character is a moron and every action, every expression, every line of dialog illustrates that marvelously, effortlessly, hilariously. Wahlberg expresses every moronic desire of his character as if it were the obvious and only answer to the problem. It is unbelievable, insane; Wahlberg’s Lugo is a walking train wreck from frame one to the final sentence hearing. 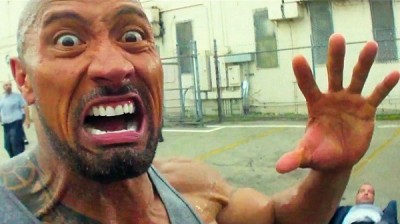 As Lugo’s co-conspirators, Dwayne Johnson as ex-convict Paul Doyle and Anthony Mackie as Lugo’s best friend Adrian Doorbal round out the trio of dimwitted criminal wanna-bes. Johnson playfully reaches out of type losing the usual heroics and wholesomeness of recent roles, to play a recovering drug addict and ex-con who is easily duped by Lugo into joining in on the kidnapping, being promised no one will get hurt. His character is so eager to rediscover friendship and adoration that he quickly loses sight of his sobriety and freedom. Johnson plays Doyle as a lost child-like soul, an easily manipulated, innocent with a coke habit and a mean tempter. His best line sums up his character, “God gave me this gift, to knock people the f@ck out.” His deer-in-the-headlights approach to character affords Johnson a number of large laughs and as series of inane jokes. Anthony Mackie plays his character as Lugo’s emotional puppet with Doorbal having a complete and absolute (yet unrecognized) man-crush on Lugo. He sees Lugo as a brilliant mind, a master planner, a guiding force in his own life. Mackie’s Doorbal is a victim of his loyalty to his best friend regardless of the nature of their actions or the consequences. Both actors play their characters as simpletons which makes them sympathetic to a fault but also despicable and undeniably idiotic. As each new horrible thing happens to them, the more they deserve it. 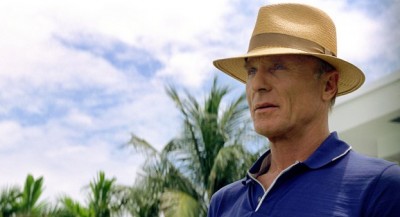 Pain & Gain has a remarkable supporting cast as well with Tony Shalhoub and Ed Harris elevating the material while Ken Jeong and Rebel Wilson are more for laughs, sometimes at the expense of the film itself. Tony Shalhoub is captivating as Victor Kershaw, the detestable wealthy Miami businessman. His handling of his three imbecilic captors is brilliant, especially the way he attempts to manipulate Johnson’s Doyle appealing to his religious natures only to be betrayed, unwittingly, by his own Judaism and stubborn nature. Kershaw is a despicable character, but his is a victim and the film desperately tries to hold on to that notion unevenly balancing it with the leading characters and the comedic tone. The problem is that he cannot be more despicable than his captors or Bay further risks making the criminal heroes. The only true hero in the film is Ed Harris’ Detective Ed Du Bois. Harris is the film’s finest asset bringing a much needed class and honor to the movie. He is also delightful in his handling of Kershaw and in his observations of Lugo, Doorbal and Doyle. He is also the perfect actor to balance against Wahlberg, Mackie and Johnson and is able to do so nearly all by himself. On the downside is Ken Jeong and Rebel Wilson. While they do provide the film with some of the film’s strongest and loudest laughs, they are also far more broad than the more satirical nature of the surrounding script. Both are there for their comedic prowless and both deliver. Unfortunately neither is as much a character as they are a guest staring role. Not to forget Rob Corddry and Mindy Robinson who each have their shining moments especially the more they get drawn unwillingly and unknowingly into Lugo’s plans. 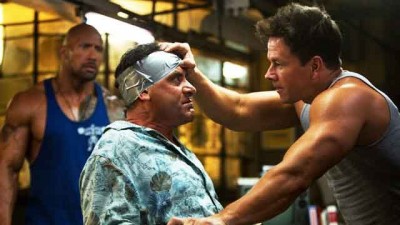 Michael Bay handles the direction of Pain & Gain much as he did with the Bad Boys films. He does add one feature into this effort that works surprisingly well. In many cases, voice overs can pull the audience out of the feature or disrupt the action or plot. In Pain & Gain, not only does Daniel Lugo narrate much of the film, but each main character gets the opportunity to add insight into the on-screen action. This nearly singlehandedly saves the film from being an action-comedy bomb. The dialog in the voice overs provides witty and introspective looks into the thoughts and observations of each character. Not only does it totally define the nature and motivation of Daniel Lugo, it also clearly and affectionately illustrates Doorbal’s perception of Lugo and it provides depth to Johnson’s Doyle as his thoughts often conflict with his actions. When Kershaw and De Bois are thrown into the mix later in the film, the more the insanity rises. Beyond that, Bay handles the action with his usual flair however far more restrained than in the hyper-kinetic Transformer films. Still he manages to swirl his cameras around his actors and provide shaky-cam chases throughout Miami. 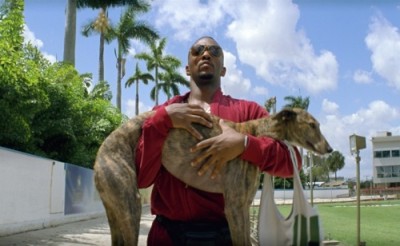 Pain & Gain is a gem. A look into excess and superficial class structures where it all ends up having very little meaning. It’s the haves versus the have-nots and neither is particularly deserving. Bay also is careful to show that once the have-nots have it all but without earning it, the money, the houses, the girls, the riches do very little to change their lives or make them happy except in the most peripheral ways. Lugo and crew’s getting there is the fun part, staying there and, ultimately loosing it all, is the hilarity, the reward. The only respectable persons in the film are Ed Du Bois (and his wife) and the Miami Dade Police. Bay also has to play cautious in how he portrays the victims of Lugo’s criminal activities. He must show them as deserving targets of Lugo’s misguided moral decisions but also as innocent victims of a madman’s ignorance. For the most part, Bay is successful but it is a tightrope that swings back and forth from scene to scene making some of the comedy difficult to project. 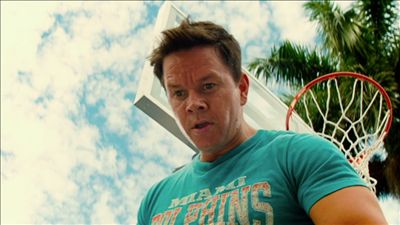 Still, in the end, as a satirical look at some of Florida’s most inane and moronic criminals, the film is wildly effective and laugh-out-loud funny. Wahlberg is in full Dirk Diggler and John Bennett mode where his charisma is accented by his character’s utter stupidity. The rest of the cast is equally up to the challenges of the script and Bay delivers the thrills and the laughs.Handling his satire in a unique Michael Bay fashion, the film is far different than the crisp satire of Dog Day Afternoon and the campy satire of Scarface. The satire here is far broader, painted in large strokes from the character’s misguided interpretation of the American Dream to their perception of life, love, possession and friendship.   Pain & Gain is a solid achievement in Bay’s filmography. 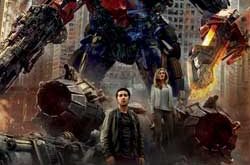