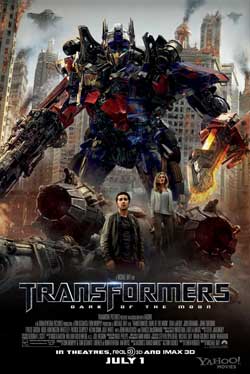 The Autobots learn of a Cybertronian spacecraft hidden on the Moon, and race against the Decepticons to reach it and to learn its secrets.

Before The Black Saint gets to the meat & potatoes of this review, I wanna tell you about my son (It’s pertinent people. Just read.) Lil’ Saint III is 9 going on 10. He starts 5th grade in the fall (Accelerated class, natch). He reads on a college level (He is always reading something). He taught himself Flash Professional CS5, Photoshop, and a whole bunch of sh*t I couldn’t describe to you. He designs computer backgrounds & some Flash games as well. He is athletic as well & takes Tae Kwon Do classes. In other words, he’s a really good kid & smart as all get out. Yet, 20 minutes into “Transformers: Dark Of The Moon” he tapped me on my shoulder & whispered in my ear “Dad, what is going on in this movie”?

The even sadder part is that I could explain it to him only up to that point pretty much. We both had to wing it for the next two hours (Over two & a half actually). “Dark Of The Moon” actually begins with the answer to why the USA had to land on the Moon before any other country. Apparently, during the war on Cybertron, one Autobot, Sentinel Prime, managed to escape with a weapon that would end the war on Cybertron with the Autobots triumphant. But he was shot down & crash landed on the Moon. Over the years, the wreckage laid there slowly being encrusted in Moon dust. Until, they were discovered by us of course. And that’s when things get hairy.

All of the usual suspects return for this, the 3rd installment of the series. Sam Witwicky (Shia LaBeouf), Lennox (Josh Duhamel), Epps (Tyrese Gibson), Simmons (John Turturro), Sam’s parents, Ron & Judy (Kevin Dunn & Julie White). Along with some new ones who are slumming like Frances McDormand (Mearing), John Malkovich (Bruce Balzos) & Patrick Dempsey (Dylan) among others. I made mention of all of them because after their initial introductions only McDormand & Dempsey make repeat appearances to very little effect actually. Although Dempsey does try to make his character something more than a cookie cut out character (He fails miserably though).

I love it when a script opens up a plot line that is fairly rote to begin with & then the screenwriter (In this case, Ehren Kruger) just throws ideas at the script & hopes something will stick to it. Even if it’s something completely stupid. Actually, I was amazed that Kruger was the only credited screenwriter on the film. I normally see 3-4 writers on most projects nowadays but Kruger’s name is the only one on display here. Brave man indeed. Because the script just gives up about 45 minutes into the film & relies on what all of the “Transformer” films rely on…Big shiny robots beating each other up. For a very long time…a very, very long time. Quite literally, the last 60-70 minutes of the film is just one large robot throwdown with neither rhyme or reason to it. It’s calculated to beat the audience to submission. And in that sense, it succeeds impressively. The film just devolves into scene after scene of clashing metal, to the point that you don’t quite know who’s an Autobot & who’s a Decepticon. And after a while you don’t really care either.

The film features the debut of a fan favorite Decepticon, Shockwave. Who makes an impressive entrance as a sort of coiled, slithering metallic Boa Constrictor as he winds himself around buildings & Autobots alike. It’s cool for awhile but eventually he fades into the background amidst all of the other twisted metal throwing punches & karate kicks at each other. It also features an Autobot called “Sentinel Prime” who is apparently a pretty big f*cking deal to the Autobots (& is voiced by Leonard Nimoy in a nice touch. Actually there is a snippet of music from “Amok Time” from the original “Star Trek” series in the film as well). Meanwhile, all of the human characters run to & fro. Deftly avoiding all of the exploding cars, toppling buildings, missiles, bullets, etc…etc. It’s amazing what actors can do when faced with a script that quite literally gives them nothing to do but run & mug for the camera (Malkovich in particular makes a fool of himself in a ridiculous role). The special effects are top notch of course. I did believe that giant robots were duking it out in Chicago, I just didn’t give a f*ck. And there are some direct lifts of some spaceship attack scenes from “Battle: L.A.”, and I mean direct…

You know I don’t expect much from director Michael Bay. He does what he does & he does it well (If explosions & nonsense are what you’re after that is). But who cares? Sometimes I don’t think the man actually exists. I think he’s some sort of robot or hologram that makes public appearances every so often but doesn’t actually direct films. Sort of like the mythical “Alan Smithee”. I mean, who would take actual credit for the films that Bay is credited as directing? Would you…? I didn’t think so. I thought the first “Transformers” film was moderately entertaining & fun. The second installment beat me over the head with a Aluminum baseball bat. This one dug me a grave, covered me with dirt & then dug me back up to bitch lap me some more before finally allowing me to exit with enough sense to remember how to drive my car home.

The script doesn’t matter in films like this & the “Baybot” knows it. All he does is introduce characters to ignore them minutes later so he could get to his much vaunted explosions & such. I know people like this sort of stuff. Young people who don’t know any better than to spend their money on something more worthwhile like, I don’t know…college or something. These are the kids who’ll force their parents to take them to see this film this weekend, pushing it upward of a $200 million dollar debut after the smoke clears. It saddens me to see Spielberg’s name prominently featured in the credits as well. Don’t get me wrong, he’s still Spielberg but crap like this is something I wouldn’t be proud of frankly, unless big returns are the goal. If that’s the case..he’s doing fine.

And by the way, it’s no secret that actress Megan Fox was fired from the franchise by Spielberg himself after a comment she made comparing him to Hitler. I don’t know how true or untrue this is but the actress chosen to replace her, Rosie Huntington-Whitely, is not an actress. She isn’t even particularly attractive either. But she does know how to slide down the side of a glass building without scratching herself, or even ripping her clothes or mussing up her hair, which deserves some sort of recognition. Megan got a little gritty at least. At the end of the film, in the middle of decimated Chicago, she walks out of the smoke with her heels on, jeans tight, hair perfectly coiffed & not a smudge on her face as she embraces Sam. That my friends is one hell of a special effect.

Normally, The Black Saint would give a film like this at least one shroud just for the technical achievements alone. I try to find something to speak well of in everything. But the film doesn’t do anything technically different than before…it just does them bigger. That doesn’t make them any better, just more annoying. The script is crap, acting is crap (Although Ken Jeong has a funny cameo in the opening hour), direction is crap. The film is crappy, pure & simple. And it’s 2 1/2 hours long to boot. Why would a movie about battling toys be that long? Because I think this is just one really expensive & exploitative commercial, and not a very entertaining one either, I’m giving it Zero shrouds. The movie going public deserves better than this pablum. Times are hard & apparently not going to get better anytime soon. Any discretionary funds families have to spend on entertainment would be better spent renting a movie than wasting the cash on this junk.