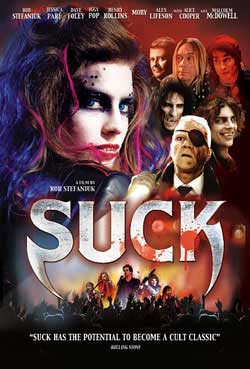 A rock’n’roll vampire spoof about a down and out band, The Winners, who will do anything for a record deal. When their disgruntled manager (Dave Foley) tells them that they are getting “long in the tooth”, he doesn’t know that his words are truly prophetic. During a road trip, their humdrum image radically changes when Jennifer (Jessica Paré), the bass player, disappears one night with a hip vampire (Dimitri Coats). She emerges with a sexually charged charisma that drives the audiences wild.

As the band members succumb, one by one, to blood lust, their “gimmick” launches them into the limelight. Following an “incident” on a national radio show with “Rock’n Roger” (Henry Rollins), they hit mega-stardom beyond their wildest dreams. Joey (Rob Stefaniuk), the lead singer, is haunted by an eerie bartender (Alice Cooper), who turns out to be much more. Meanwhile, legendary vampire hunter, Eddie Van Helsig (Malcolm McDowell), is tracking them down, despite his fear of the dark. When a veteran music producer (Iggy Pop) calls them on becoming a vampire freak show, they begin to realize that fame is not what it’s cracked up to be.

Suck is a wild ride down a highway to hell, with a killer soundtrack that includes Iggy Pop’s, “TVeye” and “Success”; Alice Cooper’s, “I am a Spider”; Lou Reed’s Velvet Underground’s “Sweet Nuthin”; David Bowie’s, “Here Comes the Night” and The Rolling Stones, “Sympathy for the Devil”.

Well the verdict is in, “Suck ” may be one of the weirdest, coolest most original films I’ve seen in quite some time. I wasn’t sure what to expect going in with so many vampire films littering the market, but Suck is worth the price of admission. Part, comedy, part rock and roll film, part art house and even part musical… it’s sort of a cross between all of those and more. For one we got a great cast of characters including Alice Cooper who plays the bartender / slash devil. Alice is looking much like a vamp himself but that’s because he is one classic old school dude. His red leather snakeskin militant jacket is the perfect wardrobe for is mentor deviant role. On the flip side we have the always flair for dramatics Malcolm McDowell, who plays the role of the resident vampire hunter veteran. 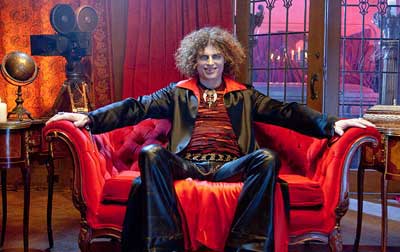 The film centers around a touring small time band named “the Winners”. When Jennifer the bass player steps out with the weirdest scariest looking dude this side of Rock horror Picture show she returns the next day a blood sucking vampire. Sometimes she glows, while other times she looks like a corpse warmed over. In any case the band just assumes she’s had a  bad night of drugs and alcohol and goes about their business. Its clear though that the new “vampire” influence is bringing the band into the limelight and helping them attain the notoriety that they’ve been struggling for. Soon the whole group is vampenzed and things get really weird. As they try and deal with a vampire bass player, they also begin to see the perks its brings despite the need for feeding and killing off groupies. Jessica Paré who stars as Jennifer is hypnotically alluring at times that only seems to get better when she’s one of the undead. The whole ordeal is wrapped up in a ludicrous black comedy, that reminded me of similar paced films like “Doom Generation” 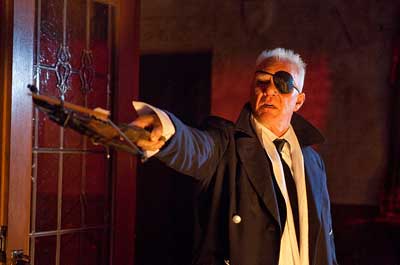 “Suck” manages to incorporate alot of music through which even at times breaks into a music video format. The music in this case is a defining factor that really makes this piece sing to the thrill of viewers. Rob Stefaniuk who directed, wrote and stars in the film as the band leader Joey excels with bringing some really great original tracks to the films strength. At the time of writing this there wasn’t a soundtrack in place, but I’m pretty sure that fans of the films will demand one released. Other great contributions make the audio resection a really rich experience. Cameos roles help enhance the cult style format of this film with appearance by Alex Lifeson, Henry Rollins, Iggy Pop and even the singer from Moby. Dave Foley gives a comedic performance as the bands flaky manager Jeff. 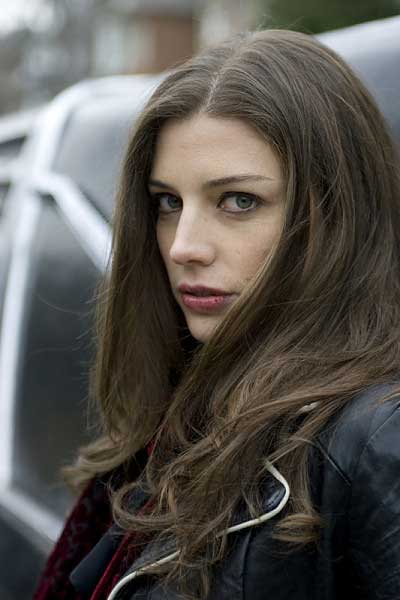 This film is pure fun and has alot of fun with itself as well. One of the on going gags is its ability to cut to segments within the film that mirror classic album covers. It’s not overused and after a few, you begin to look for the visual cross references. 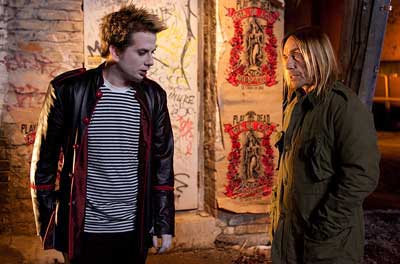 Dmitri Coates stars as the head vampire Queeny who is just as creepily odd looking as they could find. You’ll know what I mean…..once you’ve seen him. If your wondering where they dug up this grinning ear to ear fraggle rock haired dude, he is also the lead singer for the band “Burning Brides”. The film sung song “Flesh and Bones” is a definite eerie highlight.  In an age were vampire films are falling off the shelves, this film really brings a fresh perspective that works. Clever, richly composed and smack full of flavor “Suck” is one film that doesn’t! 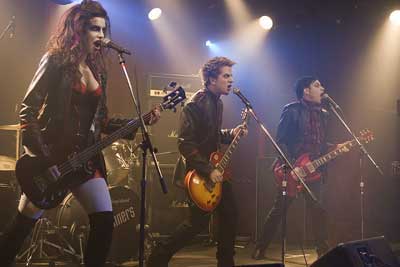 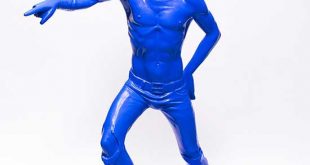