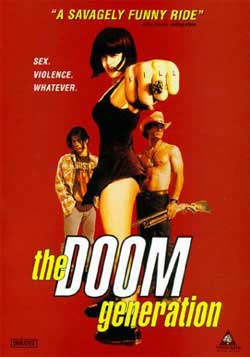 A teenage couple with a f*ck the world attitude encounter bizarre, brutal, and morbidly comical scenarios after a sleazy drifter hops into their car during a brawl.

The Doom Generation is actually the second film in what is considered a three part set. The viewer can watch the film completely without ever knowing such. It certainly was designed that way. Prepare to be dialed back to the mid 90’s. I remember seeing this film for the first time and not being too far off from some of the crazy main characters in this film. This is certainly not a horror film. It is a society of the times look and many have always placed it in a level with Natural Born Killers. While I comprehend this notion, it is unique in its own way and truly has nothing to do with those elements. If you are an Industrial music and alternative fan like myself this movie will have you from the beginning. It begins in an industrial club with Nine Inch Nails ‘heresy’ being played on the dance floor. References to My Life With The Thrill Kill Kult and music from the time are plentiful. You can even expect cameos from Skinny Puppy, Perry Farrell, Margaret Cho, Heidi Fleiss. I Know…strange combinations. If you even mention this movie to me what pops in my head? Bubblegum, Neon, Rebellion, and Freaky Sex. To be honest I was crazed when I was a kid so it hits home.

The two young lovers in the film Amy Blue (Rose Mcgowan) and Jordan (James Duval) perform an acting job which seems sometimes pretty mediocre. Let’s keep in mind though they are supposed to be teenagers. They definitely exude that combination of angsty attitude with an almost desperate naivite. So if that is what they were going for they performed alright. The character of Jordan is overly passive, weak and almost vacuous. He can become a tad annoying, sometimes you just want to slap him and say “be a man!’ The female Amy Blue is his opposite, nasty sharp tongued and dark. She uses crude phrases which I love like “eat my f*ck” and “blow it out your crusty rectum.” When I think about it she really reminds me of some of my ex girlfriends when I was that age. Seriously. Xavier (Johnathon Schaech) Plays the sleazy 20 something guy that crawls into their car when a fight breaks out at a drive in movie. His performance is quite decent. He portrays the antithesis to the couple. Tainted, creepy, rough and uncomfortable. You just know this guy is trouble from the moment you see him. He is always getting uncomfortably close to both girl and boy alike.

Murder comes real quick in this film. It is gory, twisted and quite comical. I mean seriously talking severed heads, what would movies be without them. Really, whenever a body part goes astray in this film it never seems to be that much of a big deal. So take this film lightly. Enjoy the ride, literally. Look for the witty phrases and numbers stashed all over The Doom Generation. It is one of the most entertaining aspects of it. Eventually you just keep waiting for the next one. Really clever and brilliantly placed. It is a nice touch when the viewer can start feeling an interaction with a film. Loony characters are in heavy stock. A funny aspect of the film, no matter where she goes Amy Blue is always mistaken for someone else by people she never met. Shotguns just always seem to pop out of nowhere here. It is quite hysterical at times. You must have a dark sense of humor for this film. I adore the way the crew survives on junk food from 7/11 type convenience stores…nachos with neon orange cheese, slushies and candy. Oh boy were those the days, remember living on that stuff?

Sex is an overpowering theme in this film. If you do not like sexual scenes, unconventional sex and pretty crude graphic sexual topic, skip it. It will simply eh emm rub you the wrong way. Figure out where Jesus’ visage winds up in this film? There is one scene towards the beginning that might just make you gag. We are dealing with pretty freaky beings here. The character of Xavier is a heavy influence on the two, especially Amy. Trust me when I say things start to get sticky and icky. One scene during the climax of the film is indeed brutal. It is filled with a choppy flashing strobe camera effect that will burn images in your head. Pitch black then an image, pitch then an image. Trust me you can see what is going on and it is freaky.

The ending of the film can leave you a bit with a 50/50 feel. You can figure that out for yourself. If you lived wild like me in the mid 90’s you will possibly even identify with several aspects of this film. The Doom Generation, go check it out. Peculiar and Sleazy is the name of this game.