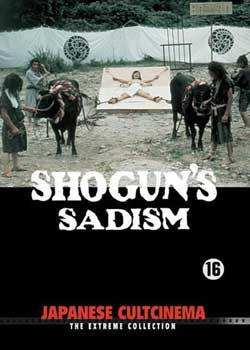 While marketed as a sequel to Shogun’s Sadism: The Joys of Torture, The Joys of Torture 2 is neither directed by Teruo Ishii and does not seem to be an official sequel. However it is set, as is the former, during the Japanese Edo era and takes its inspiration from the horrific and grotesque forms of torture used during the period, and is composed of two separate tales set 200 years apart. Providing coherence between the tales and creating narrative motivation for extensive scenes of torture are is the centrality of a doomed love affairs: the first between a Magistrate’s personal assistant, Sasaki, and a young Christian woman, Toyo, and the second, a penniless beggar, Sutezo, and a beautiful prostitute, Sato. Both love affairs end in tragedy and torture, lots of torture.

In the late 1960s and early 1970s, all the big Japanese studios produced their own variations of the ‘pink’ film, which was notable for a brutal attitude towards sex and violence often entwining the two to produce some of the best Japanese cinema to date. Mainstream pink cinema was not as overtly political and was often extremely misogynistic with female abuse and rapes a constant feature of many of these films dramatizing the uneven relationship between men and woman in Japan at the time. However, Shogun’s Sadism despite scenes of female rape –which thankfully the finer details of which are pixelated out – is surprisingly enjoyable, with a nice balance of horror and humour and an equal opportunities approach to torture – one particularly leg-crossing scene concerns a man being castrated, while another shows in excruciating detail feet being hammered to a bloody pulp and another involving the slow and torturous beheading with what seems to me a particularly blunt saw.

The first story begins with Sasaki washing by a river. As he does so, he is bitten by a snake. A young woman, Toyo, rushes to his rescue and takes him in to her family home, where she looks after him as he recovers. A close relationship develops between the two, but before their love can be consummated, one of the Magistrate’s spies, Yakichi, comes to the home and tells Sasaki that Toyo and her family are Christians. At that time in history, being a Christian was against the law and was punishable by death. Back at the Magistrate’s, Sasaki is promoted to the role of personal assistant to the Magistrate and is forced to watch on helplessly as Toyo is raped before being taken on as a concubine to the Magistrate to do with as he pleases.

The Magistrate has no redeeming qualities, he is portrayed as a out and out sadist who enjoys watching torture and insists that his men devise more and more extreme forms of torture for his enjoyment – a woman is bitten to death by snakes trapped in a glass cage, a man’s ankles are beaten to a bloody pulp and another women is spit roasted as if she is no more than an animal. The scenes between the Magistrate and Toyo are unpleasant, but then they are meant to be in order to contrast with the purity of the love between Sasaki and Toyo, which can only be consummated after death. The soundtrack here is particularly effective drawing on a mixture of traditional and modern music, especially during the torture scenes which taken with the high production values, exceeds the dictates of exploitation cinema. Toyo’s death by dismemberment in graphic detail ends this first segment of the film.

The second segment is more broadly humorous, but none of the less graphic and extreme. Set in the pleasure quarter, we first meet Sutezo in one of the brothels where he is entertaining and being entertained by the woman who work there. Convincing one of the women, Sato, to spend the night with him by getting her to believe that he is in fact the son of a wealth merchant, Sutezo is exposed as a liar the next morning when he cannot pay his bill. Instead he is forced to dress up like a woman, with full make-up, and do menial work for the owner. When the owner discovers one of the women is pregnant, he sends an elderly matron to literally rip her unborn foetus from her and then insists that she work that same evening even though she is coughing up blood. When her lover tries to rescue her, they are caught and tortured with Sutezo forced to castrate the lover. In spite of this, Sutezo decides to run away with Sato, leading to a number of comic scenes, including one in which he tries to sell Sato to the owner of another house as a 16 year old virgin and another in which they attempt to escape from another brothel using the toilet as an escape route. Resorting to petty crime in order to survive, the two are soon caught and tortured in order to confess to the crimes. While Sato escapes death, Sutezo pays for his crimes by being beheaded.

The opening credits of still images of historical atrocities including distressing photographs of the dead and dying in the aftermath of the atomic bomb in Hiroshima and Nagasaki implies that such atrocities are not merely a fact of the past but continue into the present. The fact that the film is set in Nagasaki makes this explicit as does the fact that two of the actors from the first story appear in the second in different narrative roles – the victim becomes the victor and the villain becomes the victor – suggests that the weak can become the strong within a circular karmic understanding of life, give a more nuanced meaning to the opening intertext that ‘the weak become victims of the strong. 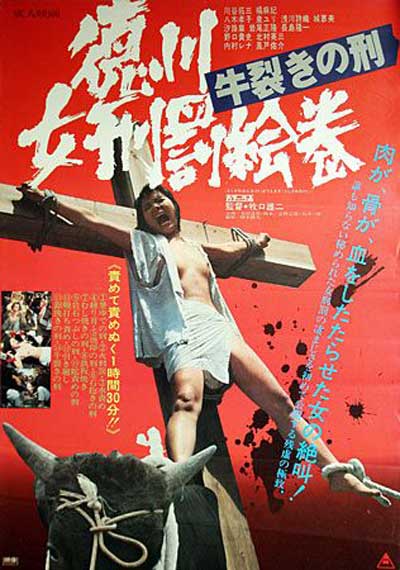 While there is plenty here for a fan of extreme cinema with intense scenes of torture and the obligatory amount of sexual sadism, and a puzzling scene with cute puppies, Joys of Torture 2 is also an extremely interesting mediation on the ethical nature of violence and as such is well worth seeking out.