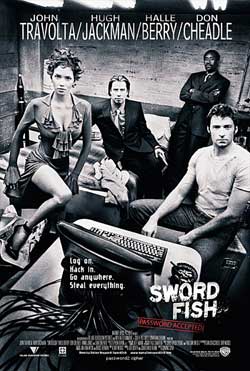 A secretive renegade counter-terrorist co-opts the world’s greatest hacker (who is trying to stay clean) to steal billions in US Government dirty money.

Easily one of John Travolta’s greatest roles, “Swordfish” is a collective of great talent, cinematography, script and slick acting. That memorable opening with the Tarantino-like monolog which quickly moves into a hostage-bomb segment ending badly to the glory of some really cool visual FX. “Swordfish” was alot of things to our curious cyber culture. Perhaps you showed up just for the million dollar-per-boob shots of Hale Berry, but it was clear from the get-go that this was a pretty cool dynamic action flick as well. 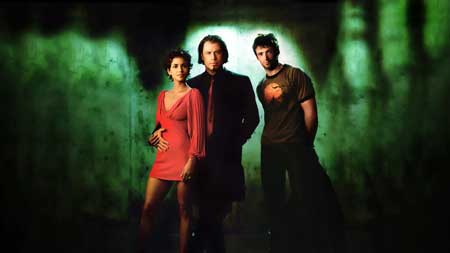 That opening monolog….written so cleverly, that it many ways it foreshadowed the outcome of the film. Then of course there is the “Wolverine star” Hugh Jackman who plays Stanley Jobson (his hacker of the year role). I suppose shortly after nerds and computer geeks were scurrying to the stores to get thir own multi-screen setup, but for the majority of us, having a 5-6 screen setup to look at (even in cinema) was pretty dang awesome.

So what’s the film about and why does it hold its own cult-like nature? In short, it’s about a bank robbery, hackers for hire, and the lifestyles of the super rich elite. John Travolta is the unflinching, super stylized Gabriel Shear who’s methods and knack for organized crime leave no stone unturned. His fascination with the ways of Houdini add a special flavor to his actions, though his true intention is to serve his country and serve his role as this “terrorist terrorizer”. While it’s clear he is the villain of the film, “Swordfish” is designed to set a neutral area that comes out of his dialog. Shear is a killer, which trumps that aspect but his belief system (or at least he thinks so) is for the better of mankind. As he states, his actions allow the freedom the rest of us enjoy so that we can live quality lives. Shear is a prime example of a sequel character that never went on to make sequels. That all so curious anti-hero.

Stanley Jobson is hired by Gabriel Shear, first for $100,000 just to meet him, and then later for $10 million so that Jobson can hire a legal council to get his daughter back. Jobson has spent 2 years in Leavenworth due to his hacking exploits and initially doesn’t want any part of the “heist”. His daughter Holly who is under the care of her mother is in worst shape with mom being married to an underground p*rn king. Jobson is motivated by this factor alone. 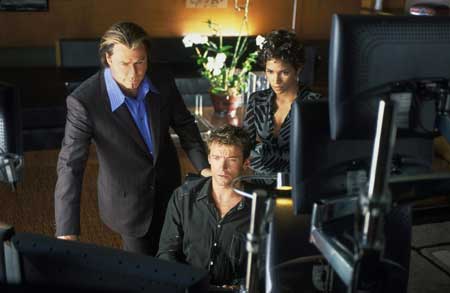 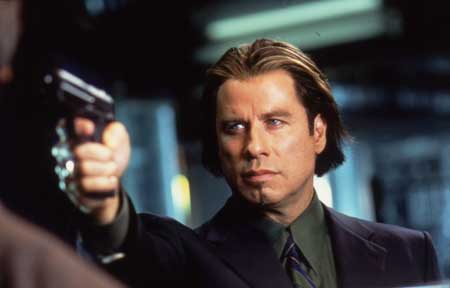 Halle Berry plays Ginger Knowles, a savvy computer expert herself that also plays on a few misdirectionals during the course of the film. Don Cheadle is FBI agent Agent J.T. Roberts, the prime-model enforcement office intent on taking down Shear and his band of merry bad men. Shears bad men reveal a few familiar faces, though with the small amount of lines they are given, it was clear that Travolta’s “had” to be the top dog antagonist.

In all, “Swordfish” works along the pace of a “Fast and Furious” movie, zipping around from challenges, confrontations, car chases and the cool use of bazookas against law enforcers (or what we assume to be). You know what he is doing is criminal, but you still find yourself rooting for his inventiveness. The film also ends on a non typical ending which wraps up the whole affair brilliantly. 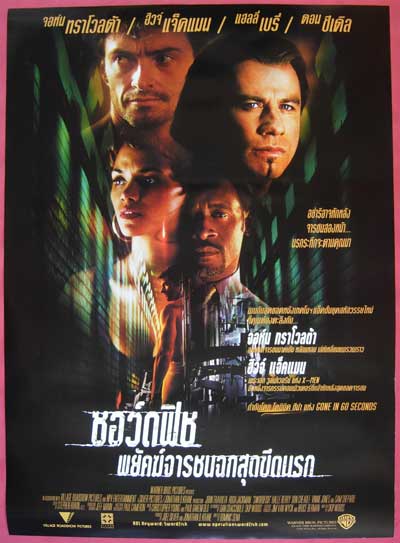 Directed by Dominic Sena, “Swordfish” works so well because it oozes style and technology. While the obligary graphical enhancements for illustrating some off the hacking pieces are far-fetched, they still sit well within some decent nerd talk that never overshadows the action. From front to back it’s a solid storyline that does as it alludes to doing…..demonstrating misdirection, assumptions and a rhythm that moves equally back and forth among the characters. Certainly Halle Berry is seen in one of her sexier roles even without the Catwoman leathers. 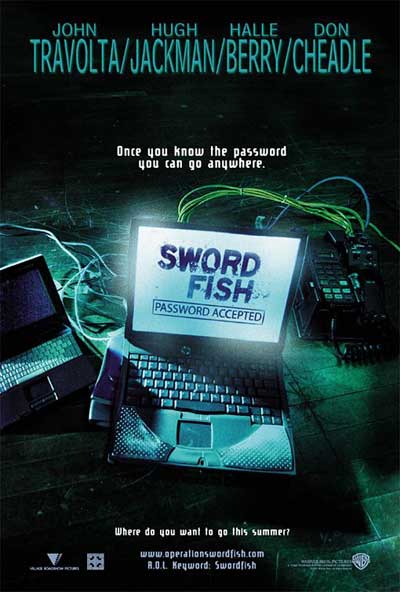 The film does contain an alternate ending which can be found on the DVD release, though it was pretty clear to me that the one they settled on somehow held the most pizzazz to align with the theme of the film.