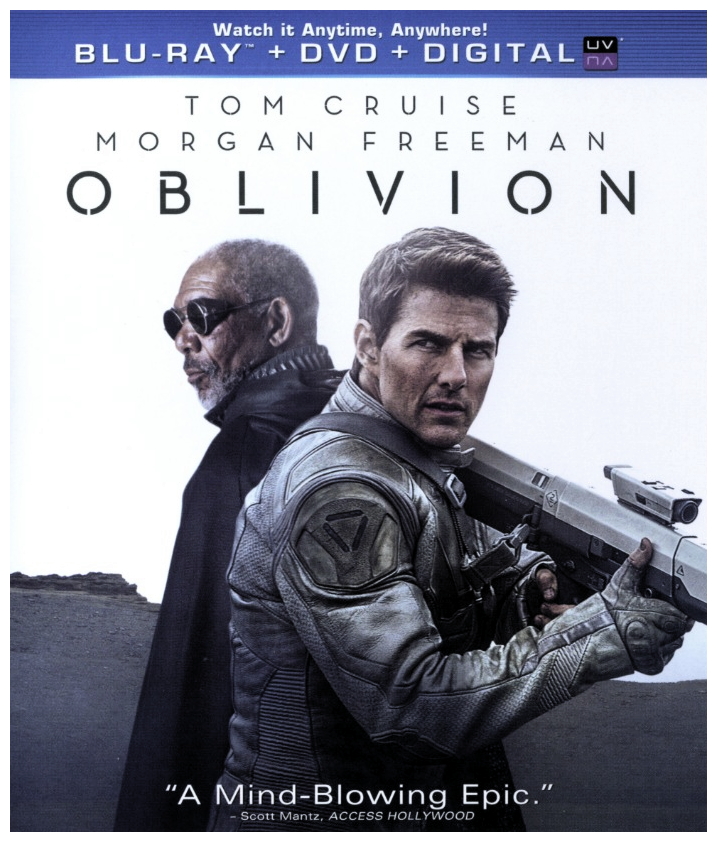 “In 2077, Jack Harper works with his companion Victoria ‘Vika’ on the surveillance station Tech 49. Jack repairs drones and his memory was erased as part of the security process to stay on Earth, and he knows that Earth is completely depleted after sixty years of war against the alien invaders Scavengers ‘Scavs’. The aliens have destroyed the moon and were defeated by nuclear weapons and the earthlings have moved to Saturn’s moon Titan since the planet was completely destroyed. Now Jack has to protect the power stations that use the ocean to supply energy to Titan fixing the drones. He also has recollections of a mysterious woman at the Empire State Building when Earth was habitable. Jack and Vika receive instructions from Sally (Melissa Leo), who is located on the space station Tet, and Vika is anxious to leave Earth in two weeks to join the survivors on Titan.” (courtesy IMDB)

I have a confession to make: I enjoy many of Tom Cruise‘s films, but not because of Tom Cruise. Whether you love him or hate him, it’s difficult to deny his box-office appeal. In fact, you’ve probably seen at least one of the releases in which he was a key ingredient: The Firm (1993), Minority Report (2002), The Last Samurai (2003), Valkyrie (2008), Knight & Day (2010) or the Jack Reacher (2012) films. While Cruise is an easy target – thanks to his religious affiliations and couch-jumping antics – he gives good screen time. His folio of heroic roles may outnumber his comedic efforts, but you need look no further than his irresistibly cheeky portrayal of the vampire Lestat in Interview With The Vampire (1994), his unrecognisable turn as Hollywood producer Les Grossman (complete with receding hairline and bulging beer belly) in Tropic Thunder (2008), and his transformation into fictional eighties rock god Stacee Jaxx in Rock Of Ages (2012) to understand that Cruise is an epic all-rounder. 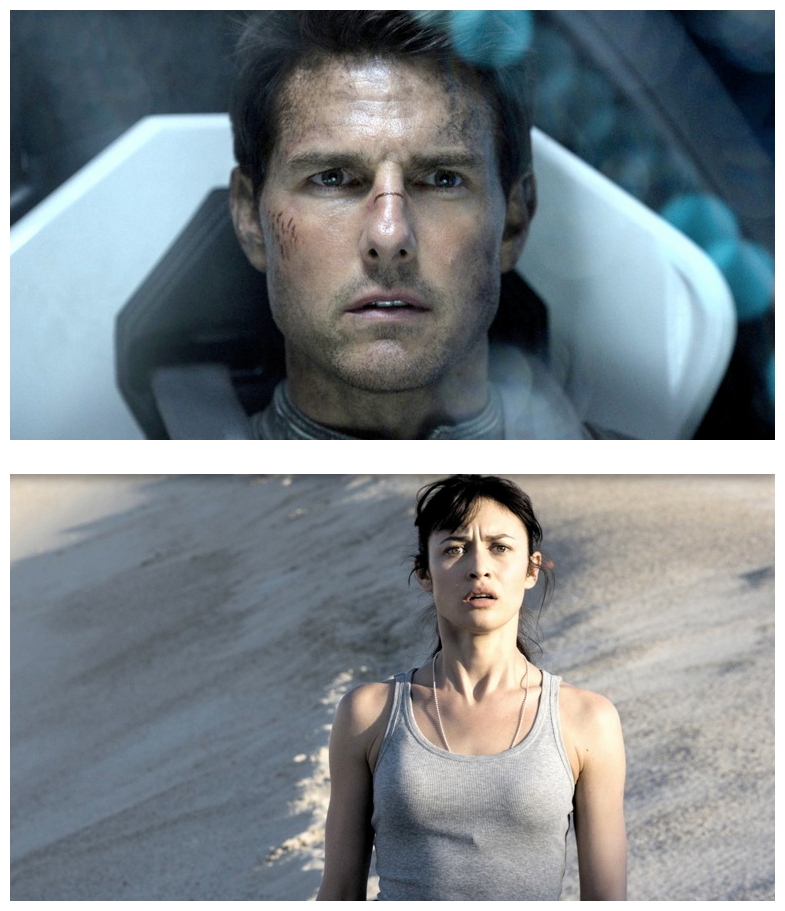 After a tiny role in Endless Love (1981), Taps (1981) positioned Cruise alongside Sean Penn and Timothy Hutton, he shared brilliant company in The Outsiders (1983) alongside Rob Lowe, Emilio Estevez, Matt Dillon and Patrick Swayze, and then Risky Business (1983) kicked in and he moved from hit to hit: Top Gun (1986); Cocktail (1988); Rain Man (1988); Born On The Fourth Of July (1989); A Few Good Men (1992); and Jerry Maguire (1996). They kept coming and showcased his versatility as an actor, but nobody really had him figured for an action hero – until the wildly popular Mission: Impossible (1996) franchise, that is. He’s up to number six now – Fallout (2018) – and his appetite for scaling heights, jumping out of planes and blowing things up seems undiminished. So now I’ll look at Oblivion (2013), another of Cruise’s forays into the science fiction action realm. It sits kind of halfway between the types of movies he mostly makes nowadays, and his occasional excursions into more risky projects: Eyes Wide Shut (1999); Magnolia (1999); and Vanilla Sky (2001) to name just three. 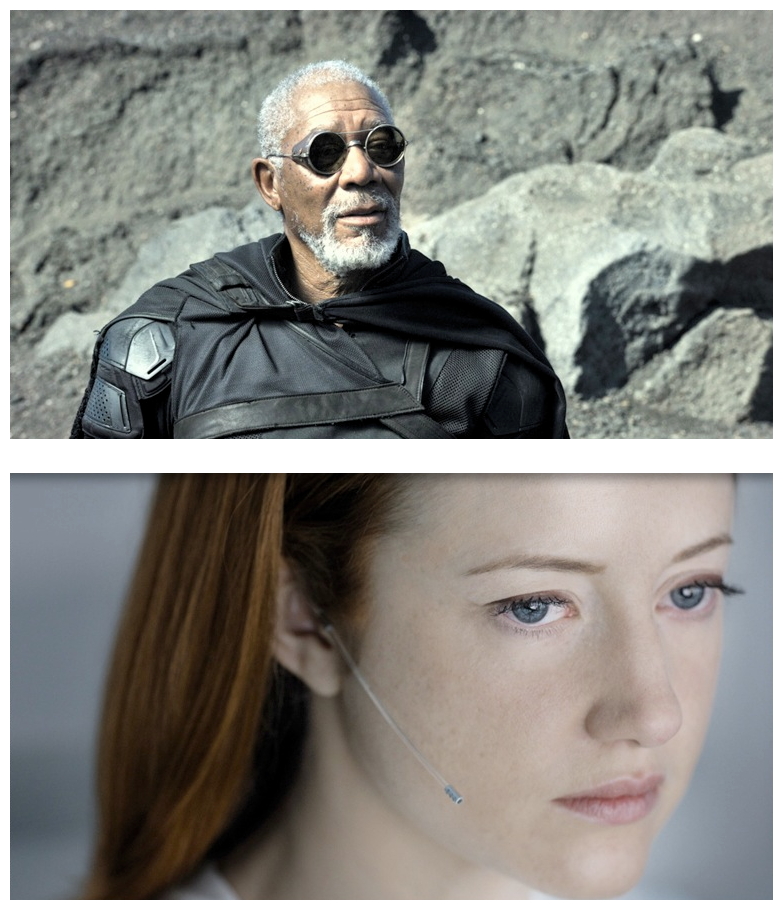 It’s no surprise that a Tom Cruise film is gorgeous to look at but, in the case of Oblivion, it’s not the star’s legendary looks that take centre stage, but the incredible scenery and special effects that depict a ravaged future Earth. Taking place in the year 2077, the surviving members of the human race have been relocated to the Saturn moon Titan, after our own planet has been laid to waste by an alien invasion that occurred decades earlier. Jack Harper (Tom Cruise) is repair technician #49 who, with his partner Victoria ‘Vika’ Olsen (Andrea Riseborough said Oblivion was the worst job she’s ever had), remains on Earth to maintain the equipment that processes water as energy for delivery to their fellow humans on their off-world colony. Harper also experiences dreams sometimes of his past life before the alien invasion. But when an old NASA spaceship crashes and a mysterious woman named Julia (Olga Kurylenko) survives, leading Harper to discover a band of hidden humans led by Malcolm Beech (Morgan Freeman), he starts to realise his situation may not be all that it seems. 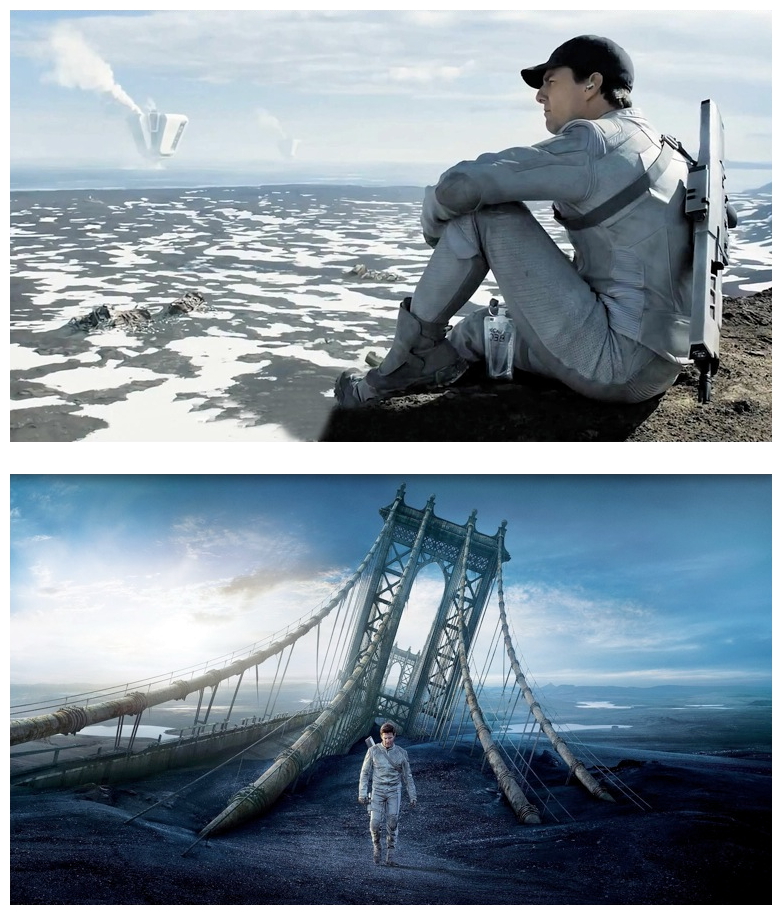 There are some big themes going on here, but director Joseph Kosinski keeps up the pace with some thrilling action scenes. There’s also a love story at its heart, so there’s pretty much something for everyone in this rather classy science fiction story. The critics were mostly positive:

James Berardinelli: “Imperfect, but some of its imperfections result from being overly ambitious.”

Justin Chang: “Insofar as Oblivion is first and foremost a visual experience, a movie to be seen rather than a puzzle to be deciphered, its chief pleasures are essentially spoiler-proof.”

Colin Covert: “The film is rife with elements from its finest predecessors (Kubrick, Lucas, the Wachowskis and Pixar could be listed as creative consultants) but it has the spirit of a love letter to classic sci-fi, not an opportunistic mash-up.” 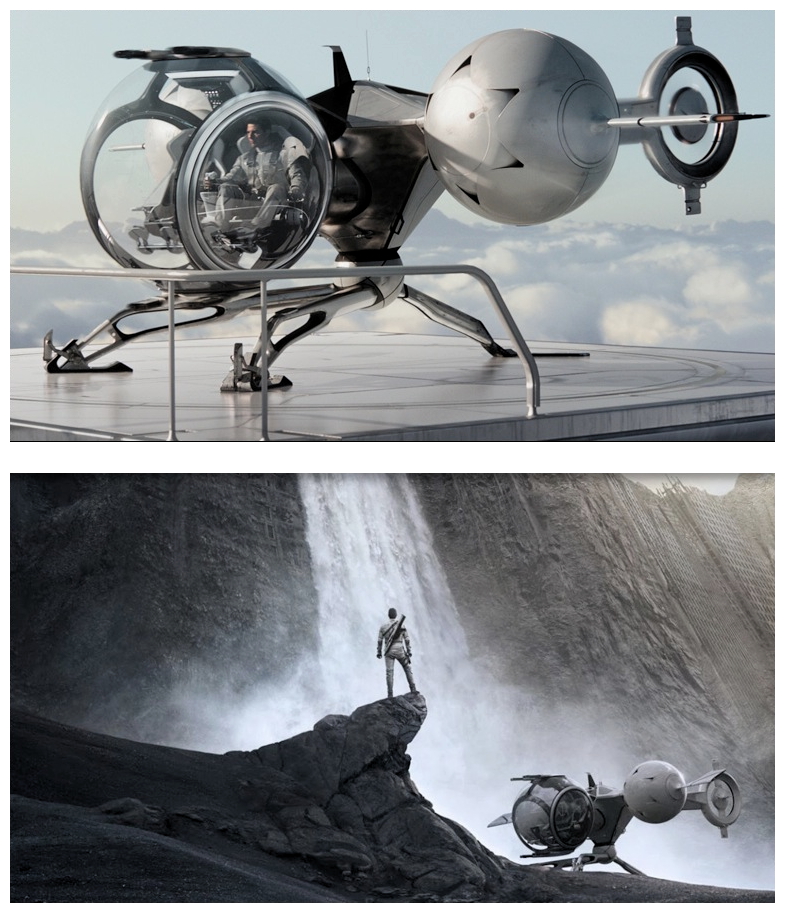 Jake Coyle: “For those who enjoy the simple thrill of handsomely stylised image-making, Oblivion is mostly mesmerising.”

Bill Goodykoontz: “It may not live up fully to its grand ambitions, but it isn’t for lack of trying.”

Kevin Harley: “It isn’t a reboot or reimagining, refreshingly, but Oblivion plays like a stylised remix of superior sci-fi ground-breakers.”

Todd McCarthy: “Oblivion is an absolutely gorgeous film dramatically caught between its aspirations for poetic romanticism and the demands of heavy sci-fi action.”

Andrew O’Hehir: “Sly, surprising and visually magnificent Tom Cruise vehicle that has forced me – and many other people, I suspect – to revise my first opinion of director Joseph Kosinski.”

Steven Rea: “Cruise oversees some pretty impressive stuff here, from the drones that ping-pong around in the air to the bubble-ship that Jack uses to go to and fro to that awesome house with its panoramic views.” (the bubble-ship was inspired by the dragonfly-like Bell 47 helicopter). 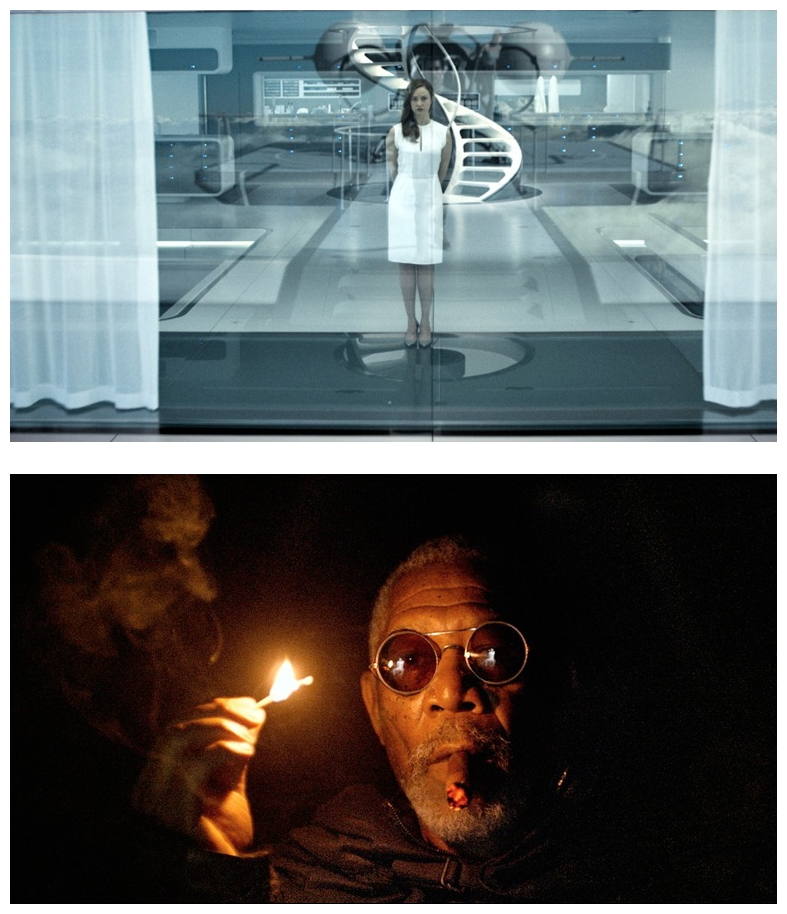 Tasha Robinson: “Unsettling sense of not-quite-right coats all of the film’s steely surfaces, and Kosinski and his co-writers give audiences plenty of time to absorb the unease and gear up for the action.”

Kenneth Turan: “More adventurous than your typical Hollywood tent-pole, Oblivion makes you remember why science fiction movies pulled you in way back when and didn’t let you go.”

The visualisation is as accomplished as one would expect from Kosinski, director of Tron: Legacy (2010), the action sequences are slick indeed but, with barely a handful of actors on board, it’s Cruise’s thoughtful and sensitive performance that gives this space-age parable its resonance. It’s a timely reminder that, along with his action chops, Cruise has amassed an impressive number of Best Actor nominations, with many for the Academy of Science Fiction, Fantasy & Horror award known as the Saturn, which he won in 2002. It’s on this upbeat note I’ll make my farewells, and hope to have your company again next week so I may bewilder you with another amazing oddity from the dark side of Hollywood for…Horror News! Toodles! 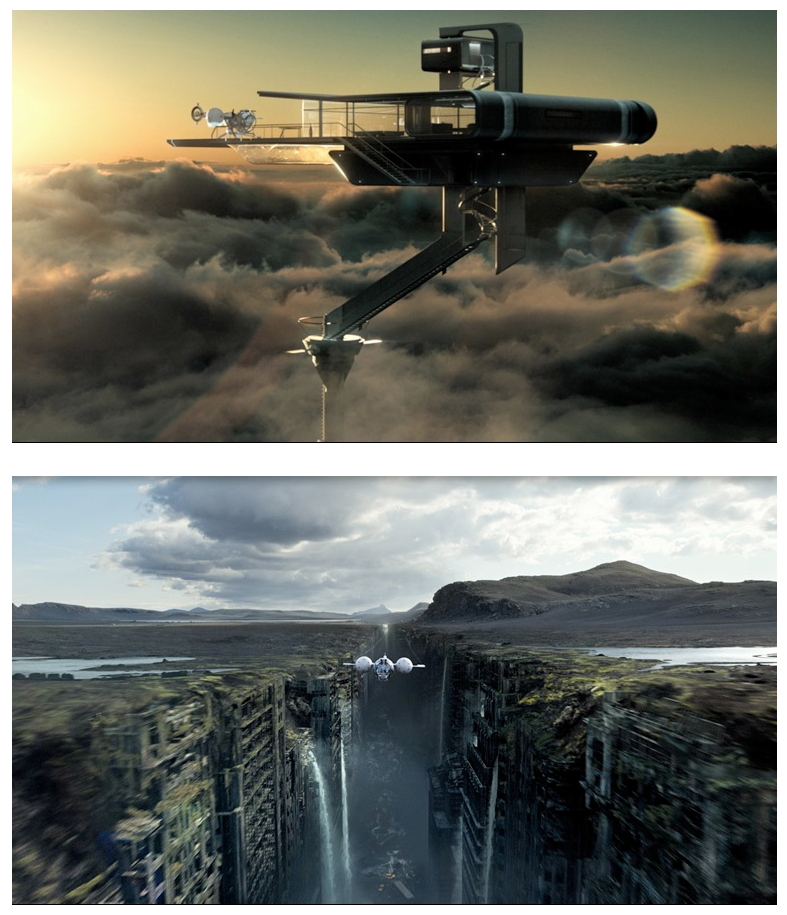