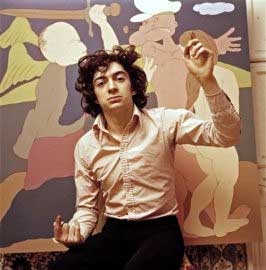 Depending on my critical faculties or level of intoxication, director Philippe Mora is either the unjustly neglected surrealist auteur of Australian cinema, or the nation’s very own Ed Wood Junior. Consider the wild array of evidence presented on a recently-released DVD simply titled Philippe Mora Triple (the distributors decided not to use the word Threat at the end). Where else could you find Dennis Hopper as a drunken Irish bushranger, Oscar-winner Alan Arkin as a washed-up superhero in silver spandex, or werewolves reborn as part-human marsupials? His work is definitely unhinged at times and, almost by accident, even inspired. 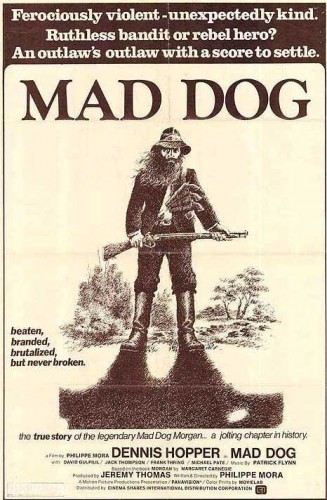 Celebrated for its pyrotechnical work and its star’s constant drinking, Mad Dog Morgan (1976) has Dennis Hopper as the Nineteenth Century Victorian bandit, which he turns into a boozy amalgam of art and life. The only thing out-of-character here are Morgan’s stick-on beards, which actually look worse than the fake facial hair seen in Monty Python’s Life Of Brian (1979). The excellent supporting cast includes Anakin Skywalker’s stepfather Jack Thompson, Michael Pate fresh from starring in the long-running cop show Matlock Police, and the fascinating David Gulpilil, probably the greatest Aboriginal actor ever to walk before the camera. 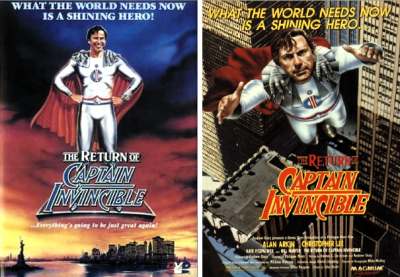 By 1983 Philippe Mora was becoming a puzzling genre unto himself. A long time before Mystery Men (1999), The Tick (2001) and Hanc**k (2008), yet still spellbindingly bad, The Return Of Captain Invincible (1983) is the kind of movie you can’t turn away from. Alan Arkin (yes, you heard right) is the fallen-from-grace atomic-age superhero languishing in alcoholic despair Down Under, until a plot to steal the Hypno Ray by Christopher Lee‘s genocidal Mister Midnight calls Captain Invincible back into reluctant action. Along the way he has to battle killer vacuum cleaners, the worst blue screen ever, and Richard O’Brien‘s painfully inserted songs which are worth enduring, if only to see Chris Lee chastise his dwarf sidekick – possibly the best duet until Marlon Brando and his midget ‘mini-me’ in The Island Of Doctor Moreau (1996). Somehow Philippe Mora was able to convince Chris Lee to appear in The Howling II: Your Sister Is A Werewolf (1985), but the veteran actor wisely excused himself from The Howling III: The Marsupials (1987) which is, incredibly, more ludicrous than the other sequels.

The first half of Joe Dante’s original The Howling (1981) is hip-funny, well-acted, stylish and scary, full of off-beat characters, old-time actors, horror film references, clever inside jokes and many delightful cameo appearances. Then the story goes out the window, and Dante goes overboard with the werewolf transformation scenes. As conceived by Rob Bottin, they are extremely impressive but they completely slow down the film because they take so long, and happen many times during a short period. Potential victims just stand there and watch instead of running away. It’s still far superior to any of its sequels, and right near the bottom of the list we have The Howling III: The Marsupials.

Concerned with Dreamtime descendants of the thylacine mating with Siberian lycanthropes, Marsupials is redeemed only by the sheer joy of the were-supial transformations, and surely one of the weirdest creature births ever committed to celluloid. The cast includes Michael Pate again, this time as the President Of The United States, Barry Otto as his scientific advisor tailing (so to speak) the lycanthropes, prolific film reviewer Bill Collins as a doctor fated to become someone’s dinner, and flamboyant Frank Thring, more over-the-top than usual, as an outrageously pompous horror movie director. Hmmm, sound familiar, Philippe? 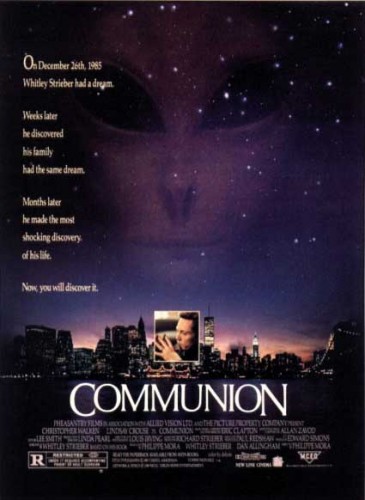 Whether you actually enjoy Communion (1989) probably depends on whether you take UFOs and supposed abductees seriously. If you do, then you’ll take this movie seriously because it claims to be a true account of a former unbeliever who, in therapy groups, comes to realise that he has not only been kidnapped by aliens, but that he has been subjected to sexual experiments. Enough hokum to keep any New Age hippy happy, I suppose. If you don’t take this sort of thing serious, then you’re likely to come to the conclusion that Communion is one of the weakest movies you’ve ever seen. The aliens are completely unbelievable and makes me wonder if Philippe was intentionally trying to make it look like a fifties B-grade movie. The lighting effects reminiscent of Close Encounters Of The Third Kind (1977) are way below standard, not to mention the sets, and a complete waste of Christopher Walken‘s talent as an actor. 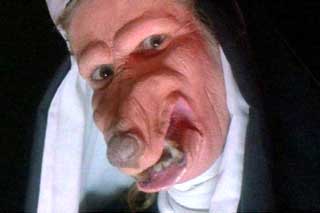 One might have thought the combination of Howling II, Howling III and Communion may have driven poor Philippe away from the world of movies, but no, he returned to the genre in the nineties with the fantastically titled Pterodactyl Woman From Beverly Hills (1997) starring Beverly D’Angelo, Barry Humphries, Brion James and Moon Unit Zappa. Concerning a housewife who is turned into the titular Pterodactyl Woman by a Shaman’s curse, it goes without saying that the film went directly to the DVD remainders tables…well, I said it anyway. 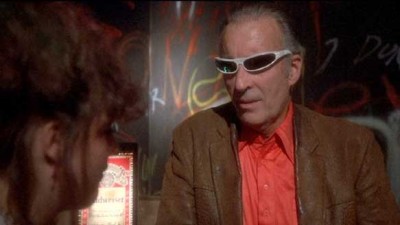 As my old friend Roger Corman once told me “You can’t keep a bad director down – they keep bobbing-up to the surface – just keep your foot on their head.” Please join me next week when I have the opportunity to scoop out your brain and drop it in a bucket with another spine-tingling journey to the dark side of…Horror News! Toodles!