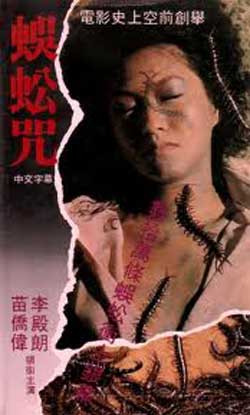 A young woman, Kay, on holiday with a friend in South East Asia, suddenly becomes ill. Her friend dies of a heart attack when she discovers Kay in agony in a small clearing by the side of the road. The doctors at the hospital are mystified by what is causing reddish sore wounds to appear on her skin, or indeed what is preventing her from speaking. Her brother, Wai Lun, rushes to her bedside only to watch her die in agony. Returning to Hong Kong, Wai Lun discovers that Kay’s illness may be associated with an incident in the past when his grandfather was the only survivor of a fire that devastated the village where he was living with his new wife and baby. When Kay’s urn mysteriously shatters, Wai Lun returns to South East Asia and enlists the help of a Taoist Priest to overcome the black magic spell that has been placed on his family before he, himself, succumbs to the same fate as his sister.

While the English title, Centipede Horror, suggests an environmental/nature-on-rampage theme, the centipedes are a result of human machination of a different kind: a vehicle for vengeance by an Elder of the village that Wai Lun’s grandfather burnt down. We discover through flashbacks that Wai Lun and Kay’s grandfather moved to South East Asia – and yes, the film is no more specific than that of about where the main action is located – and married into a wealthy family. One night his new wife discovers that her husband has been having an affair, and confronts him. The husband lashes out, and she dies as a result, as does the other woman, and in order to cover up his crime, he sets the house on fire – a fire which consumes nearly everyone in the village with the exception of the village Elder. On his wedding day, the village Elder gives him an amulet which is linked to karma, multiplying good and evil, according to the wearer’s actions. 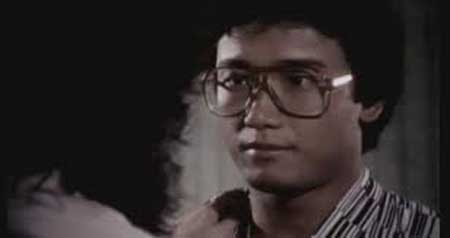 This amulet has been handed down throughout the generations and was worn by Kay when she returned to South East Asia, marking her out as a vehicle for vengeance. After Kay’s death, the amulet is passed to Wai Lun which provides him with protection against the Elder’s spells and indeed, eventually is the mechanics through which the curse is defeated. From the visual clues, and having lived in Singapore, I suspect that this mysterious place in South East Asia is in fact Singapore, and could be the reason why Singapore banned it due to the fact that the prevalence of human eating centipedes and dastardly black magic practioners in this ‘fictional’ Singapore could be bad for the tourism industry. 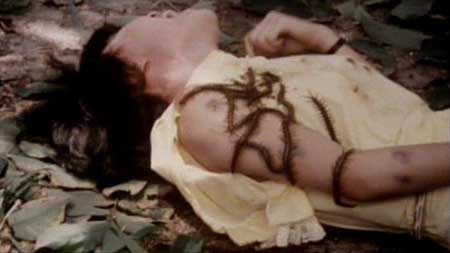 After a fairly staid first half, Centipede Horror becomes weird as only Hong Kong Category III horror can. Dancing chicken skeletons in a trippy end sequence are one of the many highlights that are disturbing in a WTF way. An earlier scene shows a young woman who has had a curse removed by a Priest, who rears ghosts from the dead corpses of children – and yes, this is a lot more fun than it seems – vomit up blood and scorpions. Scenes of centipedes burrowing through human flesh and the sound of them scuttling across the ground are genuinely creepy as is a couple of scenes where Wai Lun catches the sight of a figure in red that seems to be following him, which although derivative of Don’t Look Now (Roeg, UK/Italy: 1973) still has impact. 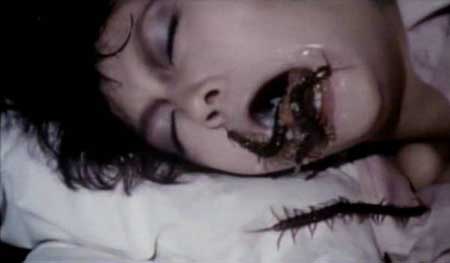 For all the out-and-out weirdness, there is a subtext around the horrific suffering of those affected by the atomic bombing of Japan towards the end of World War 2. A doctor trying to explain Kay’s symptoms tells Wai Lun that her wounds are similar to those on ‘Hibakusha’ (victims of Hiroshima and Nagasaki). Having said this, this interesting subtext is freely abandoned for a more typical black magic explanation and fight against good and evil, or dancing chicken skeletons and creepy centipedes. 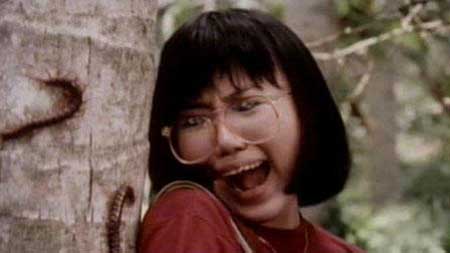 Rather more predictable is the sexualisation of Yeuk Chee – an old friend of Wai Lui’s from Canada who now lives in Hong Kong –when she becomes the victim of a ‘sound’ spell and under the influence of the village Elder. Once under the spell, Yeuk Chee suddenly starts wearing make-up and dressing sexily and attempts to seduce Wai Lun in order to get him to remove the amulet which is protecting him. When the spell is broken, Yeuk Chee returns to her innocent former self, or does she? 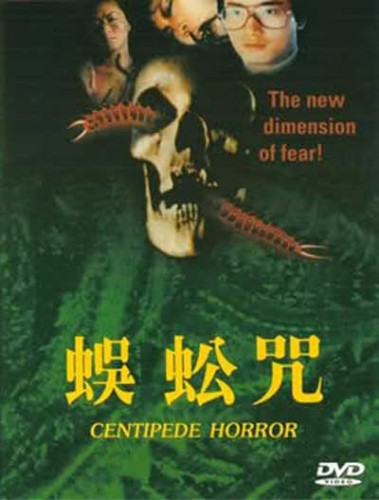 In short Centipede Horror is a great deal of fun, especially towards the end. Short on gore, but heavy on weirdness, Centipede Horror is one of the better black magic themed films that came out of Hong Kong in the 1980s and 1990s. My only misgiving about recommending the film is a scene of animal cruelty which involves a live chicken being skinned before decapitated.