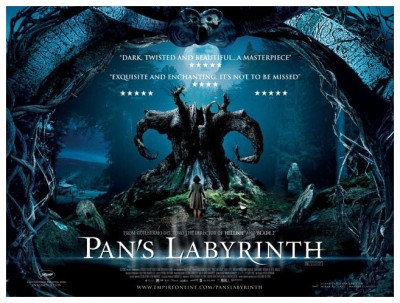 “In 1944 post-Civil War in Spain, rebels still fight in the mountains against the fascist troops. The young and imaginative Ofelia travels with her pregnant and sick mother Carmen Vidal to the country to meet and live with her stepfather, the sadistic and cruel Captain Vidal, in an old mill. During the night, Ofelia meets a fairy and together they go to a pit in the center of a maze where they meet a faun that tells that she is a princess from a kingdom in the underground. He also tells that her father is waiting for her, but she needs to accomplish three gruesome, tough and dangerous assignments first. Meanwhile, she becomes friend of the servant Mercedes, who is the sister of one of the rebels and actually is giving support to the group. In a dark, harsh and violent world, Ofelia lives her magical world trying to survive her tasks and sees her father and king again.” (courtesy IMDB)

The discovery of psychiatry and worldwide warfare during the twentieth century changed our view of fantasy. The motives behind the belief of myths and monsters began to appear. The external fears of giants and demons were revealed as the inner fears of mankind, large on the heavens and on the cinema screen. Meanwhile, the easy belief in mechanical progress of the last century became fouled with the massacres and horrors created by the industrialism that produced the conscript armies which died in front of machine guns, barbed wire and tanks of the first and second World Wars. Ancient fairy tales that have been cleaned up and reworked over the ages still harbour relics from the days when we thought it was a good idea to teach children using fearful tales of adults with sinister hidden agendas, children baked into pies, and impossible creatures who demand impossible tasks of heroes, often without reason. 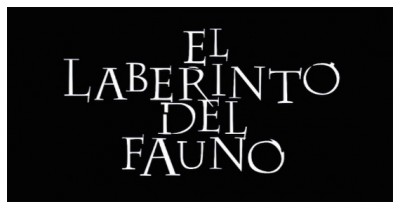 Such stories are rooted in very deep human fears, fears accessed by prolific filmmaker Guillermo del Toro in his ambitiously glorious and rather harrowing fairy tale Pan’s Labyrinth (2006). It’s a fairy tale of such potency and awesome beauty that it reconnects the adult imagination to the primal thrill and horror of the stories that held us spellbound as children. If you recall the chills that ran down your spine and the surreal humour of the Grimm brothers, Lewis Carroll, Frank L. Baum or Doctor Seuss when you were a child, or later in the dream-like movies of Luis Bunuel, Jean Cocteau, F.W. Murnau, David Cronenberg or Hayao Miyazaki, then prepare to rediscover those sensations, buried deep within Pan’s Labyrinth. Enchanting and spellbinding yet gruesome and brutal, the film is definitely intended for adults. Admittedly, some children under sixteen will find it fascinating (especially if they don’t mind reading subtitles) but, be warned, it’s a harsh and uncompromising movie. 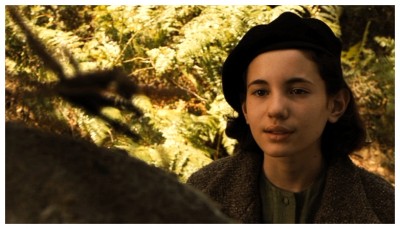 In 1944 post-civil war Spain, a fairy-tale-loving young girl named Ophelia (Ivana Baquero) travels with her pregnant mother Carmen (Ariadna Gil) to meet her new stepfather Captain Vidal (Sergi Lopez), who has been assigned to root out any anti-Franco rebels. Ophelia discovers a large insect which eventually changes into a fairy and leads her to a nearby ancient labyrinth. There she meets the faun who believes her to be an underworld princess named Moanna and gives her three tasks to complete before the full moon to ensure that her essence remains intact. Ophelia completes the first task of retrieving a key from the belly of a giant toad, but she becomes worried about her mother whose condition is worsening. The faun presents Ophelia with a mandrake root which instantly begins to cure her mother. 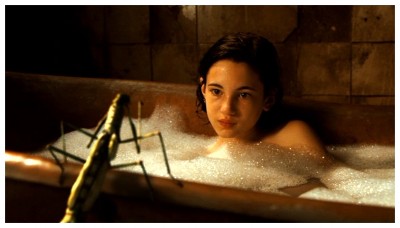 Ophelia then completes the second task of retrieving a special dagger from the Pale Man (Doug Jones), a child-eating monster who sits silently in front of a large banquet. Although the faun warned her not to consume anything, she eats a couple of grapes, which wakes up the Pale Man. He chases her and she manages to escape, but the faun, infuriated by her disobedience, refuses to give her the third task. Meanwhile, Vidal’s cruel and sociopathic nature is revealed when he brutally murders two simple farmers suspected of being rebel allies. He becomes increasingly vicious, torturing a captured rebel and killing a doctor (Alex Angulo). Vidal catches Ophelia tending to the mandrake root so Carmen throws it into the fireplace, causing it to scream in terrible agony. Carmen immediately develops painful contractions and dies giving birth to a son. 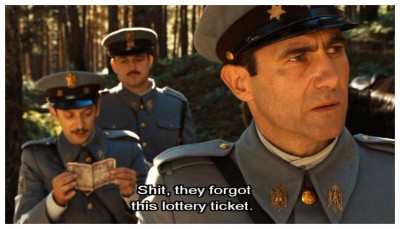 Ophelia is locked in her room and Mercedes is taken away to be tortured, but she eventually frees herself, badly injures Vidal and flees into the woods, where she is rescued by rebels. The faun returns to Ophelia and gives her one more chance to prove herself. He tells her to take her baby brother into the labyrinth. Ophelia steals the baby but Vidal chases her through the labyrinth while the rebels attack the nearby mill. The faun tells Ophelia that the portal to the underworld will open only with an innocent’s blood, so he needs a drop of her brother’s blood. Ophelia refuses to harm her brother so the faun leaves her to decide. Vidal finds her, takes the baby, and immediately shoots her. He then leaves the labyrinth, where Mercedes and the rebels are waiting for him. He calmly hands Mercedes the baby and one of the rebels draws his pistol and kills Vidal by shooting him in the face. 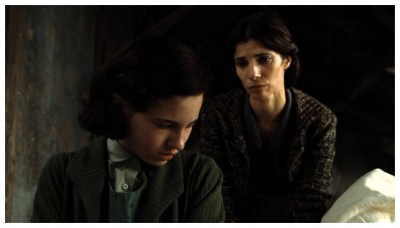 Drops of Ophelia’s blood spill onto the altar that is the portal to the underworld, and she is reunited with the king and queen of the underworld. The king reveals that, by shedding her own blood instead of the blood of an innocent, she has completed the final task and proven herself to be Princess Moanna while, in the real world, Ophelia passes away. The epilogue tells us that Princess Moanna ruled the underworld with a just and kind heart, but left behind small traces of her time on earth, visible only to those who know where to look. Although audiences have interpreted the film’s bittersweet ending as everything from a religious metaphor to a psychological allegory, director del Toro offers a simpler explanation: “I always think of that beautiful quote by Soren Kierkegaard that says the tyrant’s reign ends with his death, but the martyr’s reign starts with his death. I think that is the essence of the movie – it’s about living forever by choosing how you die.”

It’s a familiar archetypal story well suited to the dreamlike parallel realities of cinema: a girl on the brink of adolescence enters a threatening fantasy world where she discovers her own power. Alice, Wendy and Dorothy found their ways on screen and have been joined by the young heroines of more recent films such as Labyrinth (1986), Spirited Away (2001) and Mirrormask (2005). Pan’s Labyrinth is yet another version of the tale, but an unusual one in that it is not suitable for children. Not only is it replete with violence visited on the body, but its lessons – the inadequacy of fantasy as a countermeasure to repression – might be too much for sensitive youngsters. The film works on so many levels that it seems to change shape even as you watch it. It is at times a joyless picture, and its pall of sadness can begin to weigh you down. But that is del Toro’s intent and his technique. At one point the faun (whose motives are never made clear) expresses his displeasure with her, accusing her of being weak, of being only human. He tells her that, like others of her kind, she’s destined to die: “All memory of you will fade in time.” 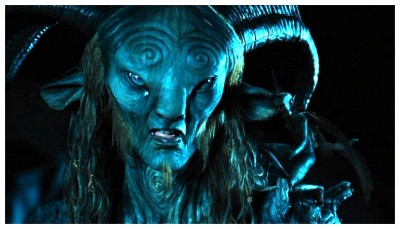 This is del Toro’s sixth feature, and not only is it one of the great fantasy films of all-time, but also one of the great elegies of childhood’s end. The movie’s political undercurrents run deep, but del Toro isn’t interested in ideology, in fact he greatly distrusts blind ideology, as displayed in earlier efforts like the comic-book fable Hellboy (2004) and the astonishing The Devil’s Backbone (2001). In evidence though is del Toro’s own immersion in genre cinema, with nods to Rosemary’s Baby (1968), Don’t Look Now (1973), The Spirit of the Beehive (1973) and The Shining (1980). It is to his credit that, when offered The Chronicles Of Narnia (2005), he turned it down in order to direct Pan’s Labyrinth, then refused to accept a salary until the film was released. He translated and wrote all the English subtitles himself, and refused to remake the film in English despite being offered double the budget, insisting that he didn’t want any compromise in the story to suit the market’s needs. 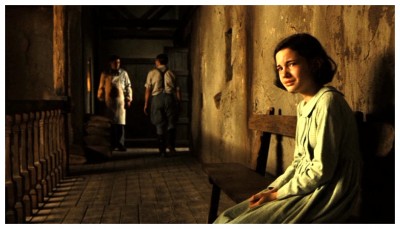 It’s as a filmmaker rather than a storyteller that del Toro is most successful here – a disjunction remains between the story’s childlike form and its gruesome execution – but there are so few directors adept at conveying both the uncanny in the real world and the recognisable in the fantasy world. It’s with this thought in mind I’ll ask you to please join me again next week when I have the opportunity to scoop out your brain and drop it in a bucket with another spine-tingling journey to the dark side of…Horror News! Toodles! 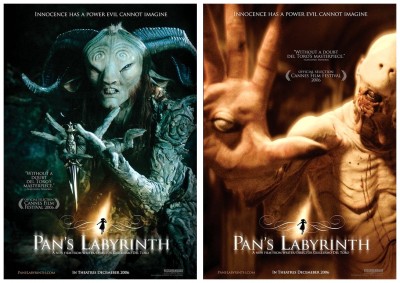