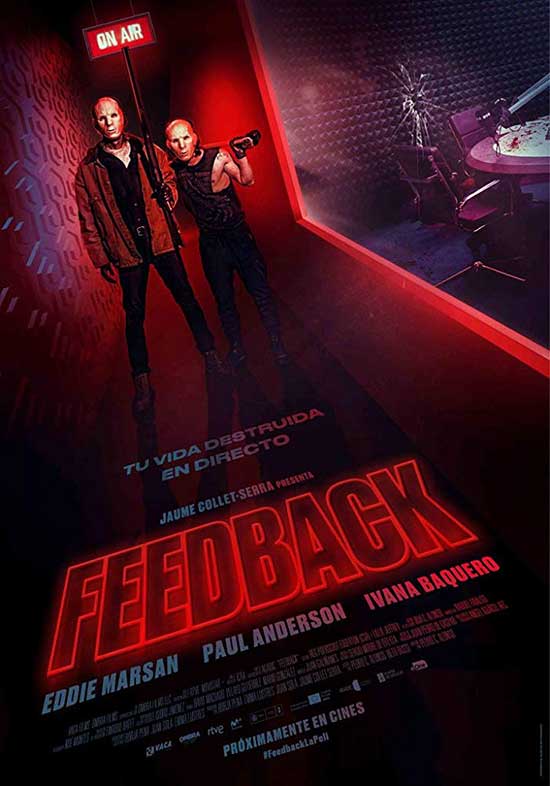 Jarvis Dolan is a popular radio show host with controversial opinions. During one taping, his show in invaded by two men who take over his show through threat of violence. Jarvis now has to figure out what he needs to do before his friends are killed.

Taking the home invasion plot to the radio station, Feedback feels just as intense as it sounds. Jarvis Dolan (Eddie Marsan) is amazing in his role of a man trying to survive.  The first half of the film is exciting, both trying to figure out who the invaders are and how Jarvis can escape. He does in fact get a chance to get away, when a well placed twist stops him from doing so. The second half is trying to figure out what circumstances brought the intruders, as well as more escape attempts. The action scenes are good without being over the top with one major escape attempt being particularly exciting.

It’s after the aforementioned twist that everything starts to fall apart. When the reason for the intrusion comes to light, it becomes a mystery as to what the truth may be. Unfortunately, while the intruders seemingly have a good reason for the intrusion, it is hard to sympathize with them. That may be the point, “He who hunts monsters” and all of that. But while the audience is trying to figure out if Jarvis has done any wrong, the audience already knows that the intruders have done wrong. I think that we’re supposed to figure out that Jarvis is guilty, but the acts that the  intruders commit keep them from receiving any sympathy. The end sheds a bit more light on what actually happened, but by then it was too late to start caring.

Feedback’s runtime of a little over an hour and a half does not do it any favors. It paces itself well, but has many scenes that could have been cut with little consequence .One of the intruders is overly aggressive. One or two moments of this would have been fine, but many of the intruder moments are spent trying to calm this individual down. After one of these moments, there is a dream sequence. It added nothing to the plot, nor was it mentioned again. There were a number of moments of disagreements between the intruders that seemed that there was a weaker alliance than was originally thought. There are a few moments of tension, but again, nothing went further than words. The worst comes towards the end of the confrontation between Jarvis and the intruders. Much of the final moments were just a back and forth between the two sides that lasts too long.  If the movie were able to cut the run time thirty minutes down, the revelations learned toward the end may have had greater impact.

The acting in Feedback is superb, allowing each character to stand out in their given roles. Special credit goes to Paul Anderson, who plays Andrew and Richard Brake who plays one of the intruders. While there were no bad actors, the direction could have used some extra time. There were points in the movie that three characters were talking at once. It felt like it was supposed to build tension but quickly became annoying. There is also the matter of how any of this happened. Two armed men take hostages including a popular radio show host, and make sure that much of what happens is aired live. Certainly it would stand to reason that security or the police would show up, but they never do. None of this ruins the movie, but these thoughts never left me as I watched.

Feedback is a well acted thriller that takes a bit too long to get to the end. The majority of the movie is enjoyable, and I can recommend it without too much concern. It is regretful that the payoff is not great, but the acting more than makes up for this mistake.