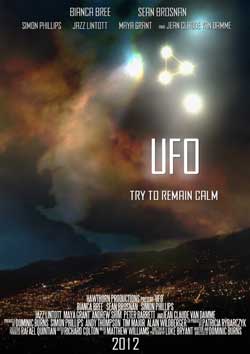 Friends get together for a night out in a bar. Life is wonderful as a couple share their proposal moment. When, suddenly strange things start to happen. Loss of power. Throughout the city. No phones, no lights, just darkness as the friends try to cope. Then an invasion from UFOs, big ones! The sky is darkened by the ships of the alien invaders. The takeover of planet Earth has begun as our the five friends struggle to survive amid the chaos and calamity. Will love survive the terror?

The alien invasion storyline is one that has been well used over the years. From the political overtones of Invasion Of The Bodysnatchers to the chest thumping pride of Independence Day many writers and directors have picked up and run with this extra-terrestrial baton. U.F.O. is the next in this long line but independent British writer and director Dominic Burns is taking a different stance on the story.

The film opens with scenes of a young group of twentysomethings indulging to excess and partying hard at a club. After leaving rather reluctantly and more than a little dramatically Michael (Sean Brosnan), best friend Robin (Simon Phillips), Dana (Maya Grant), Vincent (Jazz Lintott) and slightly mysterious stranger Carrie (Bianca Bree) head back to their suburban home. As they slowly come round the following morning they discover that the power is out. Further investigation reveals that there is no mobile phone or radio signal either but they dismiss it as nothing important. A strange encounter in the street with a prophesising tramp (Sean Pertwee) shakes Michael and Carrie a little but they ignore his ramblings and quickly forget them. Another night comes with still no power but the household is woken early by what seems to be an earthquake. As they head outside to investigate they are confronted with the sight of a massive spaceship hovering over the city. 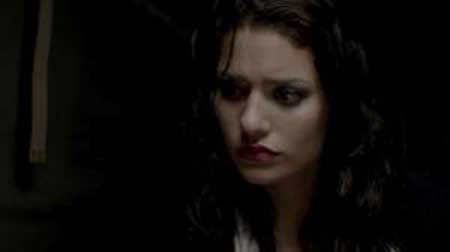 Heading into town for supplies it is clear that panic is beginning to set in. A mob is already besieging the supermarket and it’s not long before the doors give way and the shelves are ransacked. As tensions rise further and the fight for supplies becomes more and more aggressive they head back to the house for sanctuary but gradually become separated. It quickly becomes clear that they are in a fight for survival with their fellow man as well as dealing with the threat from the skies.

The first thing to note is that UFO does not conform to the majority of alien invasion conventions. This is, for the majority of the film anyway, a story of society turning in on itself and how quickly and easily mankind descends into violent and panic driven anarchy. Actions become increasingly desperate against the backdrop of the potential attack from the skies. 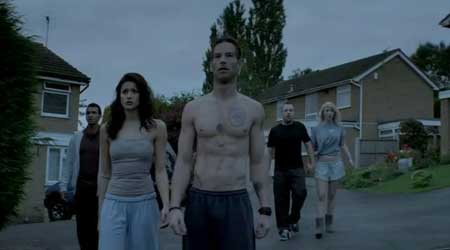 The performances are passable but descend too quickly into bouts of understandable but unconvincing moments of hysteria. Sean Brosnan is the stand out as the brooding, arrogant leader of the group and I would suspect has a strong future ahead but the remainder of the cast are a little stereotyped and spend the majority of the film simply shouting at each other, as if shrieking alone is the best way to portray intense drama. The cameos are interesting if a little underused with Sean Pertwee and Julian Glover wasted in their roles as simple plot exponents. Although when Jean-Claude Van Damme turns up as an ex-black ops office called George, and the real life father of Bianca Bree, the film loses a little of the credibility it was working so hard to gain. Dominic Burns does keep the action moving however and rarely gives the audience pause for breath but unfortunately this leads to some slightly over dramatic and over long scenes, especially some of the brutal fights.

One strong plot element though is the unpredictability of the casualty list. This is an often used tool when at least one apparently main character is killed off relatively early and “UFO (2012) movie” does use this to good effect, and the audience is left guessing as to who may or may not survive the carnage. Disappointingly the main twist is a little predictable as you always have the feeling that something else is going on but the action keeps rattling along so quickly that you will pretty much just ignore it and the film doesn’t seem to want to dwell here either. One thing I did find a little strange was the portrayal of the armed forces. For some reason they all seem to have the character of arrogant, gung-ho, gun toting imbeciles who love nothing more than a fight, and in the current climate this seems a little misguided.

To sum up UFO has plenty of issues but is on the whole a good attempt at telling an alien story from a different slant with a few interesting ideas. I would suspect that this film will split opinion but fear that the majority fall into the negative category.