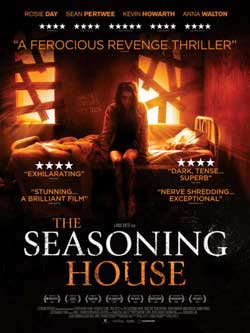 An orphaned deaf mute is enslaved to care for young girls who are prostituted to the military. She moves between the walls and crawlspaces, showing the captives little kindnesses when she can. When fate brings the men that murdered her family and exiled her to the whore house, a chain of grisly events begin that will end her captivity, free the girls still alive in the house and grant her revenge on the soldiers that destroyed her life.

Based on a series of true events stemming from the ruins of the Balkan war circa 1996, The Seasoning House is definitely one of the best films of the year and a strong candidate for best film of the year as well. Rosie Day stars as Angel, a young deaf mute girl who’s family is murdered before her eyes before she’s forced to be a sort of housekeeper/nurse caring for a dilapidated home filled with other orphaned girls who are forced into prostitution by a thug named Viktor (Kevin Howarth) and his gang. Angel is so named because she can’t tell anyone her real name and she wears a small angel on a chain around her neck (A gift from her mother). 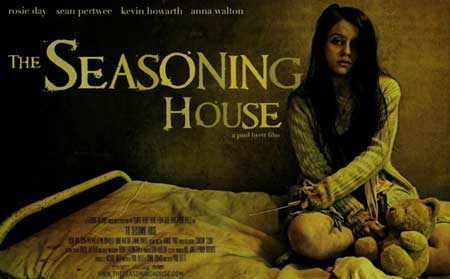 What Angel does is feed the captive girls (Who are tied to beds in separate rooms), clean them up a bit, apply some makeup to their faces and inject heroin into their veins to prepare them for the “customers” who violently rape and abuse the drugged women for a fee. Angel was spared from this life of abuse because of her handicap and a large port wine birthmark on the left side of her face which, in essence, makes her too unsightly to be used as a prostitute. But Viktor has a crush on Angel and beds her down every so often, telling her how much he cares for her beforehand. Angel doesn’t share his feelings but silently acquiesces to his advances out of fear.

The one advantage that Angel has over Viktor & his thugs is that she is small & wiry enough to fit into the crawlspaces behind the walls of the house. This is how she befriends Vanya (Dominique Provost-Chalkley), a young captive whom the customers seem to enjoy brutalizing more than the others. She also happens to be able to communicate with Angel through sign language so Angel looks at her as a sister since no one else in the house can communicate with her. But poor Vanya falls victim to not one but two horrendously vicious rapes, the first one physically disabling her and the following one ending her life. This spurs Angel into action against the rapists, who just happen to be the same group of thugs that murdered her family! 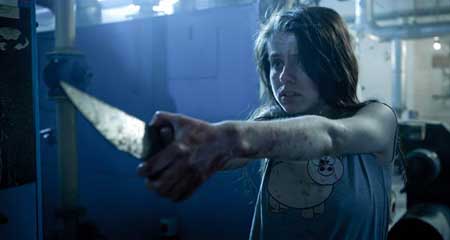 What follows is an oddball combination of Hostel & The People Under The Stairs that sounds like it shouldn’t work but in fact exceeds all expectations with it’s sudden, brutal spurts of bloody violence and it’s nearly impossible to watch rape scenes which are so distastefully unsettling that I actually got up and paused the film a few times to compose myself before returning to it. Vanya’s final rape is so horrible to watch that I felt a rush of pure unadulterated anger at what I was witnessing, I actually felt ashamed to be a man for a bit. Provost-Chalkley and actor Ryan Bell (As Ivan) give such unsettling performances in this scene that I daresay she was in true mortal peril and he belongs in front of a firing squad for his (far too realistic) acting. Watch it for yourself and tell me if the face Provost-Chalkley wears during this scene isn’t the most convincing portrait of pain on a woman’s face that you’ve ever seen in a film. Neither one of these actors are in the film very long but they both give performances that will be remembered by everyone who sees this film. Absolutely stunning work from the both of them!

But there are no bad performances in The Seasoning House. Kevin Howarth gives a great performance as Viktor, who runs the seedy brothel with an iron fist yet shows great tenderness to Angel behind closed doors. His introduction scene features one of the most sudden & unexpected bits of violence I’ve ever seen in a film. Rosie Day is nigh perfect as Angel also! She carries a “It is what it is” vibe with her throughout the film, apparently happy just to be alive and in relative good health although her slow, defeated walk tells a completely different story. She uses her sad eyes to get her emotions across to the audience and she delivers in spades, it’s a superlative performance! And I have to ask, has Sean Pertwee ever given a bad performance? Yes, he’s been in some bad films before but I can’t think of a single bad performance from the man and as the sadistic Commander Goran he’s once again proven himself to be one of the best (If not well known) actors working in film today. I hated his character for all the right reasons if you get my meaning. 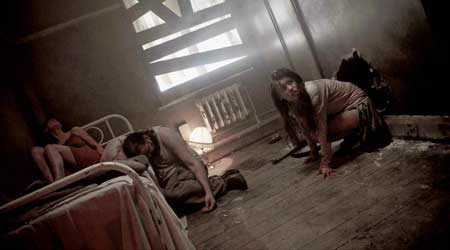 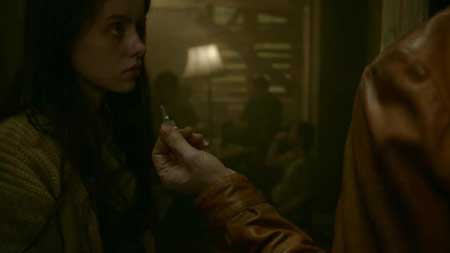 Co-Written (W/Conel Palmer & Adrien Rigelsford) & directed by special effects guru Paul Hyett, The Seasoning House isn’t for everybody. It’s a supremely bleak and unsettling film that at times succeeded in making my mouth fall agape at what I was witnessing, and coming from someone who’s been watching films for about 400 years that’s quite an admission to make. I actually felt bad at how much I liked the film because of the strength of some of it’s vile and morbid scenes of torture and violence. But Hyett is most assuredly a name to listen out for. Aside from tossing in some of the standard tropes you’d find in a rape/revenge film during it’s final third, The Seasoning House is not only one of the stand out films of the season but of the year! It’s unrelenting grimness and overall air of despair are so pervasive that you might find yourself washing out your eyes after viewing it but the fact that you’ll be riveted to your seat as it plays out is testament to it’s power. It’s a brilliantly conceived film from start to finish that will surprise, confound, disgust and revile you all at the same time. Easily one of the best films of the year!

And I ask, how can any of you NOT watch it after reading that?

“The Seasoning House”– Five out of five shrouds.