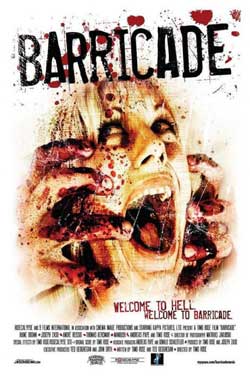 Camping in Germany, a group of friends encounter a tribe of violent cannibals in the woods. A lovely summer afternoon quickly turns into a fight for survival. Well what do you expect, camping in a place ominously known as The Black Forest?

In a world in which we now have five Wrong Turn movies, seven Texas Chainsaw Massacres and countless other identikit backwoods horror tales, do we really need another entry to the already overcrowded subgenre? Thankfully, Barricade is far from the Wrong Turn rip-off it could so easily have been. In fact, it’s even better than the Wrong Turn franchise has itself become. Although considering the quality of Wrong Turn 2 – 5 (all of which I actually enjoyed) that’s not saying much. 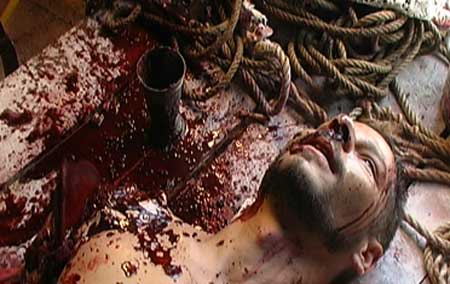 Cute friends Nina, Michael and David travel to the great Teutonic outdoors for a weekend of hiking, skinny-dipping and (Michael hopes) the possibility of becoming more than just friends. Their lovely weekend is interrupted when the local cannibal contingent gets peckish and decides to have them for dinner. It doesn’t sound like much, but Barricade is imbued with an inventiveness that sets it apart from the rest. 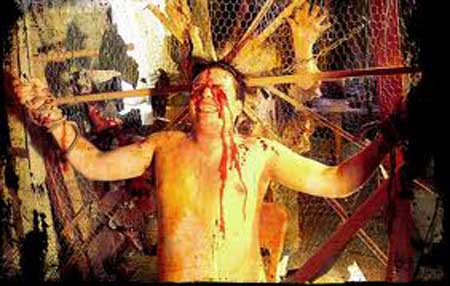 While the woods don’t look much different from those we’ve become used to seeing in extreme cinema throughout the years (most notably If A Tree Falls or Rodvyr) the German setting is interesting. It allows the film its greatest eccentricity – the fact that many of the conversations aren’t even subtitled or dubbed. The opening five minutes have a gang of native German gentlemen violently murdered by the cannibals. Despite them all chattering away in German, it doesn’t detract from the plot. Well, “aaargh (death gurgle)” does sound the same in any language. After a title credits sequence which looks and sounds a lot like that of the first Wrong Turn, the film introduces us to our main characters – a pair of Americans and their German friend, weird cameraman David. Even more surprising, once the dialogue switches to English: the script isn’t that bad, for a low-budget movie. The acting isn’t great, but the writing is amicable enough that the characters still seem likeable and sympathetic. There’s a lovely moment in which joker David goes to hold Michael’s hand. It’s a subtle character-centric touch which you don’t seem to get very often in this sort of thing. Of the talent, Raine Brown is the best, showing a lot of promise as the tough but vulnerable final girl. As the menfolk prove themselves to be useless, Nina is more than just a damsel in distress. In fact, at one point it’s actually her who does the rescuing.

All the time, the story is punctuated with intermittent scenes of torture and violence in which several other unlucky passers-by find themselves in the wrong place at the wrong time. This helps, because the main story is slow to get going and low on incident. The German Hillbillies look decent, given the low budget and the film’s amateur looks. They certainly make a change from the rubbery deformed cannibals of The Hills Have Eyes remake and Wrong Turn series, feeling more realistic and frightening by comparison. Well, a lunatic in a dirty gas mask is scarier than a lunatic in prosthetics. The kill sequences look good too – gritty, gory and real. They’re ably supported by some nifty camera tricks, a low-fi, raw exploitation feel and creepy sound effects. It probably overdoes the squealing pig sound bite, but we can forgive these minor flaws in a movie which manages to overcome its limitations in such style. The music isn’t bad either, although that does depend on your tolerance for American soft rock. 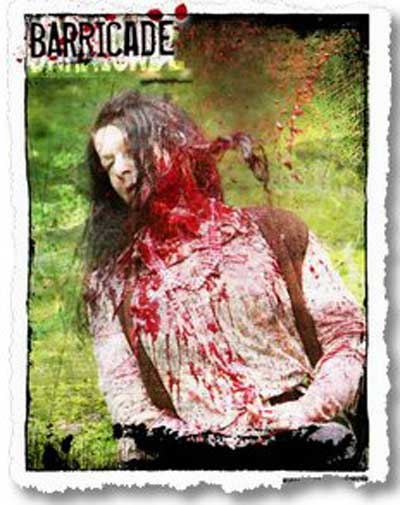 Barricade is an intelligently nasty addition to the pantheon of backwoods horror movies. While it can’t help but suffer from a little redundancy (this story really has been told so many times before) it is better than a lot of more mainstream, higher budget films. You can take down the barricade – this one is okay by us.