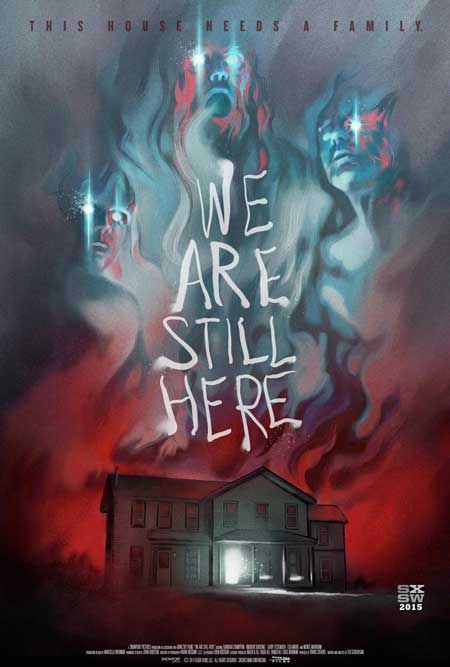 After their teenage son is killed in a car crash, Paul and Anne Sacchetti move to the quiet New England countryside to try to start a new life for themselves. But the grieving couple unknowingly becomes the prey of a family of vengeful spirits that reside in their new home, and before long they discover that the seemingly peaceful town they’ve moved into is hiding a terrifyingly dark secret. Now they must find a way to overcome their sorrow and fight back against both the living and dead as the malicious ghosts threaten to pull their souls – and the soul of their lost son – into hell with them.

Whoa! Where did this one come from?

After the death of their son, Paul (Andrew Sensenig) & Anne (Barbara Crampton) Sacchetti decide to buy a house located in the town of Aylesbury, in snowy New England. They arrive to find a local populace nearly as frosty as the snow on the ground, but since they’re both grieving their loss, they don’t take much notice of them. At least not for awhile. But once they start hearing noises coming from the basement, and a mysterious woman passes Paul a note that says “This house needs a family – get out.”, they start to get the inclination that all isn’t right in snowy Aylesbury. Turns out there’s a family of malevolent ghosts living in the basement, and they need to sacrifice victims to the house every 30 years or so. And if they can’t do it, then the townsfolk are more than willing to pick up their slack. Exactly why the house needs human sacrifices every three decades is something that’s not explained very well, but the premise is still solid – and unnerving. 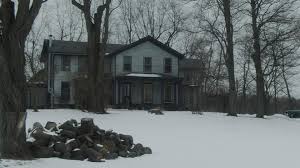 Once the Sacchetti’s are all settled into their new digs, Anne immediately begins to sense their late son’s presence (much to Paul’s dismay). And her insistence that their son is trying to reach out to them proves to be the catalyst for the rest of the film. Shortly afterwards, the get a visit from a few of their neighbors, Dave (Monte Markham) and Cat (Connie Neer). The visit goes nicely until the couple are about to leave. It’s here that Dave decides to regale the Sacchetti’s with the story of the family who lived in the house prior to them. Turns out the house was a funeral home, but the family that owned/operated the business fell afoul of the townsfolk because of what they were doing with some of the bodies they were entrusted with. Over the years, every family that’s ever lived in the house had problems with…something. Dave pretty much says it all when he slyly notes that “It’s been 30 years since we’ve had fresh souls in this house“. Cue the dramatic musical undertones! 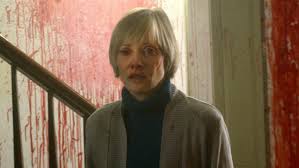 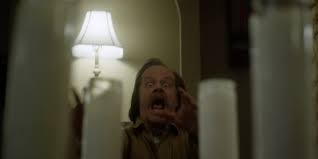 Although Dave laughs off Anne’s perception that something is wrong with the house, he can’t deny that it always smells like something is burning, and it seems to get awfully hot inside as well. An electrician is called in, but that just doesn’t go very well. Soon afterwards, friends of the Sacchetti’s, Jacob (Larry Fessenden) & May (Lisa Marie) show up to offer some moral & spiritual support. They’re both amateur psychics and Anne asks them to try to help them sort out the issues they seem to be having with their new digs. But that soon goes south as well, and the Sacchetti’s soon find themselves under siege by a vengeful group of townsfolk on the outside, and a family of angry ghosts on the inside – at the same time.

What’s amazing about We Are Still Here is the way it all feels. Even though it takes place in the 70’s, it goes the extra mile by looking and feeling like a film straight out of that decade as well. The entire look of the film screams Seventies Horror Melodrama!, and writer/director Ted Geoghegan obviously did his homework because it’s all so spot on perfect in its look/tone. The gorgeous New England landscapes are beautifully shot by cinematographer Karim Hussain, but (in a wise move), he never makes it look too pretty. There’s a sparseness to the imagery here, one that reflects the mood of the protagonists and the residents of the town. There’s an immediate sense of doom/gloom to the proceedings that makes its presence felt as soon as the film begins, and it really helps to sell the whole story. The acting is decidedly subdued, but that fits the story as well. Although Fessenden has a showy scene 3/4 of the way in, where he really starts to chew up the scenery, it doesn’t feel out of step with what’s going on all around him. There aren’t enough good things to say about Crampton, who shows an admirable combination of class & restraint as Anne, and although I’m not familiar with him, Sensenig keeps up his end of the deal – holding his own playing against the formidable genre doyenne that Crampton has become. Fessenden does what he usually does, and he does it better here than in any film he’s been in before. Lisa Marie essays her role well, but it’s essentially a throwaway part – there isn’t much to it. It’s Markham who really kicks ass here! I haven’t seen him in any type of production in years (I actually thought he had passed away), but he hasn’t lost a step and really gives his all in a part that could’ve felt hackneyed in the hands of another actor. The ghost family (Lassender, Eloise & Fiona Dagmar) are acceptably eerie & off putting, but extremely reminiscent of the pirate ghosts seen in John Carpenter’s The Fog (1980). They even manage to appear in billowing clouds of smoke just as Carpenter’s pirates did. As played by Guy Gane III, Elissa Dowling & Zorah Burress, the Dagmar family are a formidable trio indeed, never mind the fact that they mostly just stare at people for the for 2/3 of the film. What they manage to accomplish in the final third of the film pretty much cements them as three of the gnarliest ghosts to ever grace the big screen. 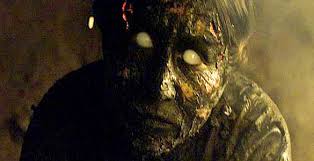 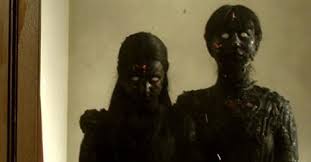 And what exactly happens in the third act of We Are Still Here? Suffice it to say that it’s a heady mixture of Romero, Argento & Fulci at their bloody best! The final 20-30 minutes of the film are among the bloodiest I’ve ever seen, with geysers of the red stuff being spewed all over the house in a gorgeously gruesome display of gore and guts. The tonal shift from the previous hour might be jarring for a few seconds, but it’s all so breathtakingly unexpected that you can’t help but be awed by the spectacle of it all. And after all of that, Geoghegan manages to give us an ending that’s supremely quiet, and terrifically terrifying as well.

I just loved We Are Still Here! It captures the essence of a 70’s horror film perfectly, and the massacre at the end harkens back to the blood splattered exploitation films of the 80’s as well. It’s a slow burn film for the most part, but when the pedal hits the metal – no one is spared. I guess the best praise I can offer it is I wish I’d seen it in a theater (I watched a screener at home) with an appreciative audience. It’s just that kind of film, one that made me yearn for the good old days of movie watching – before the multiplexes took over. Some of you will find it too slow, or meandering perhaps. And you all have a point, but there’s a purpose for all of that, and if you don’t get it on your first watch, might I suggest a 2nd viewing? Because We Are Still Here is genuinely eerie, frightening, creepy as hell and easily one of the best horror films of the year. Do not miss it!

The film was produced and distributed by Dark Sky Films