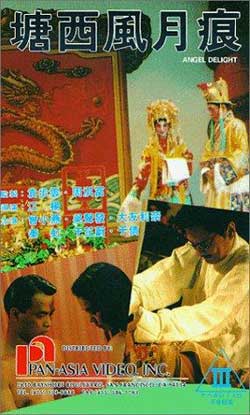 The Beauty’s Evil Rose is a great title, but rather misleading – The Beauty’s Evil Parasitic Penis-monster would have been more apt, as the plot – such as it is – involves a Satanic female cult who seek to take vengeance on men, for perceived and/or real wrongs, using a parasite which is transmits deadly poison through sexual contact. The police, helmed by Inspector Cheng (Alex Fong) come into contact with the group and their demonic High Priestess, Dai Jeh, in connection with a case involving the disappearance of young women. So begins a battle of Good against Evil, Penis-parasite against phallic authority, and Women against Men. Who wins? Who cares? Does anyone know what is happening anyway?

Supposedly The Beauty’s Evil Rose is one of the most notorious of all Hong Kong Category III films, although I am not sure why as there is very little violence and although there is a great deal of sex, it puts the ‘soft’ into ‘soft-core’. The opening 30 minutes are tedious to say the least, and as ‘straight’ as the film gets, before it veers off into the territory of SMB, girl-on-girl action, badly choreographed kung-fu action scenes and psychedelic mind tripping, and as a result becomes more interesting, although totally demented. 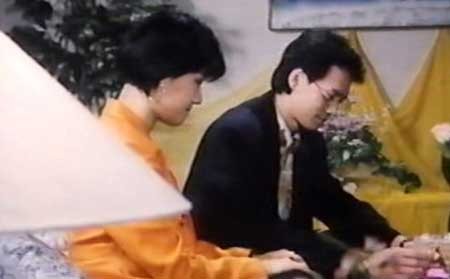 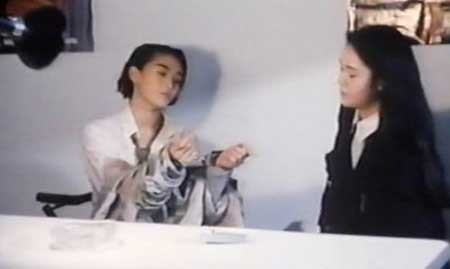 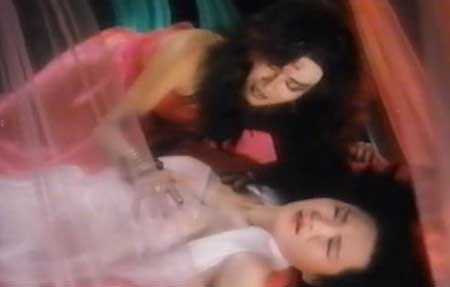 The addition of a Taoist monk (Lung Tien-Hsiang) who helps the Police conquer the evil Dai Jeh and her group of lesbian lovers foregrounds the broad humour with which the narrative is played out. When Mannie, the girlfriend of A-Kang (Chung Jan-wang) goes undercover to help the Police break the case and release A-Kang’s sister from the demonic clutches of Dai Jeh,

The Monk is called on to ensure that Mannie does not become possessed like Dai Jeh’s other victims. He asks A-Kang to bring him a piece of her underwear; as to why and how a bra will enable him to get into contact with Mannie seems besides the point, as it seems to be purely a plot device which functions to foreground the broad humour or the carnivalesque nature (which seems to be one of the dominant features of Hong Kong Category III films) of the film, with A-Kang offering his own underwear to begin with and then bringing the Monk a rather large bra and explaining it away by saying that Mannie has lost weight. 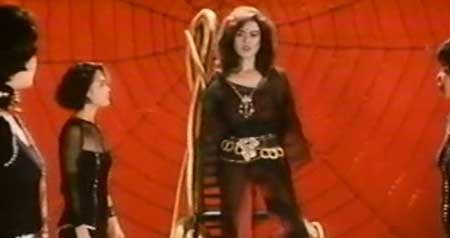 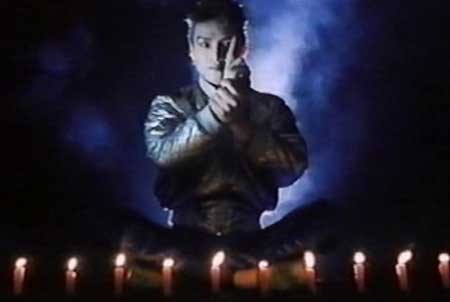 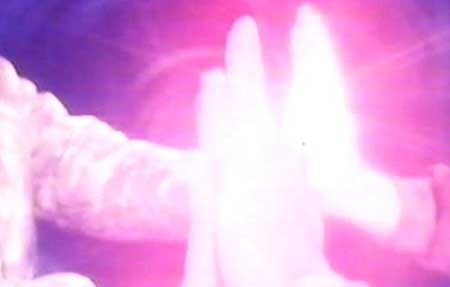 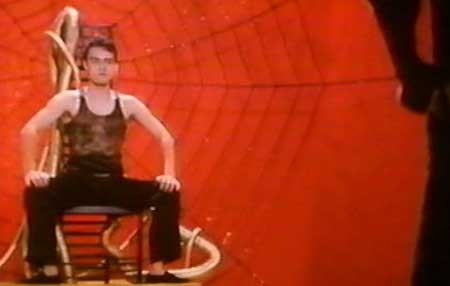 In fact, all the scenes with the Monk are played for laughs, even the final battle between the Monk and Dai Jeh, when the Monk sacrifices his life for the greater good, and possibly victory over the demonic forces of non-patriarchal sexuality. However at the same time, the film seems to express anxieties over non-normative sexualities with such dangers exemplified by the parasitic penis-monster which Dai Jeh, uses – it emerges from her palm – to entrap beautiful young woman and use them as her sex slaves.

The parasitic penis-monster itself seems to have been ‘influenced’ by both Cronenberg’s Shivers (1975) and Rabid (1977), giving rise to the loss of sexual inhibition as in the first, and emanating from the female body as in the second. But both these films had a plot, whereas there is none to be found in The Beauty’s Evil Rose outside a tenuous ‘female revenge against patriarchy’ narrative thread which is implied in a series of flashbacks in which we see women being raped and abused by men including an unpleasant scene in which one young woman is forced to fellate a gun before being shot through the mouth for her services.

However perhaps more problematic than this, is the seemingly overt homophobia with Dai Jeh’s demonic powers originating from a ‘sissy’ (as the subtitles call him), who also significantly enough Thai. While such homophobia is probably unintentional – after all ‘girl-on-girl’ action is par for the course for Category III films – there is a construction of homosexuality as deviant and demonic and as something which needs to be punished and resisted. Indeed, the film’s ending reasserts hegemonic patriarchy and conventional gender positioning through the death of Dai Jeh and the return to normative sexuality of A-Kang’s sister. 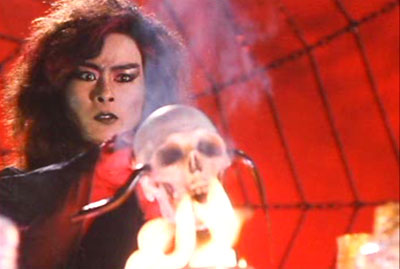 Having said this, the broad comedy and carnivalesque elements of The Beauty’s Evil Rose in some way negate the barely suppressed homophobia of the plot, and taken as a comedy the film is relatively successful. As such, anyone looking for explicit sex and/or gore, will have to look elsewhere as there is nothing here to warrant its notorious status in the annuls of Hong Kong Category III cinema.