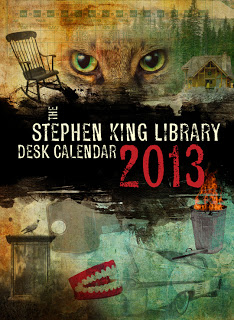 This year has certainly been a treat for Stephen King fans, with 2 new trivia books arriving on the market. I also wanted to turn your attention  over to this new calendar I just received called “The Stephen King Library Desk Calendar 2013“. Now I know my review is already into February, (what can I say…we get ALOT of stuff to review here at HNN) but better late than never. In any case, there is plenty of great reasons why King fans would want to snag this up whether you do it for the calendar or for just the King goods.

The product is nicely printed with a engaging design that King fans will really dig! Not only that but it is loaded with Stephen King info and literary pieces. To start the cover features a hard bound hologram style (I think that’s what you call it) cover with various Stephen Kind book iconic style images. The book is bound in a wire bound style that I personally think “every” book or read should be bound in. The release is published by “Bookspan” who have done a great job at presenting this piece of interest.

Now for all you King readers, each calendar spread features a different literary inclusion. some more factual, some excepts, others as short stories, King trivia, and original pieces that flow nicely from one spread to the next. Now instantly my take on this was, great way to keep your calendar dates and enjoy something interesting to read every week. Seeing that it covers an entire year, means that you get quite alot to enjoy.

Smaller illustrations are included more as clip art style silhouettes which top off this nice looking way to enjoy the 2013 year. Being that this is a calendar, I’m keeping my review short, though its my intention to go back and enjoy some of these enticing inclusions.

So where can you pick one up?
I’d start with this link….get it while its hot!

Check out the PR for additional info:

The 2013 Stephen King Library Desk Calendar is coming! With The Wind Through the Keyhole: A Dark Tower Novel published in April 2012, the publisher is carrying on the tradition of the ka-tet into this year with some discussion of that release. Stephen King s time-travel novel, 11/22/63 a phenomenal ride into the past, is also highly praised and discussed in the new calendar.
For this year s theme we head into the past, where we ll be celebrating King stories that all hit a memorable milestone this year: the 35th anniversary of The Stand and Night Shift, and 30 years for Christine and Pet Sematary and more. Discover the rest of the milestones for yourselves, but and get ready to reminisce and discuss sharing some dark and delightful trivia for them all. Also we ll get a glimpse into the places King will be taking us in the future, like catching us up with the child hero from The Shining, Danny Torrance, in the upcoming sequel, Doctor Sleep. Join Stephen King all year long! This title is published by Bookspan and distributed by OC Collectibles.