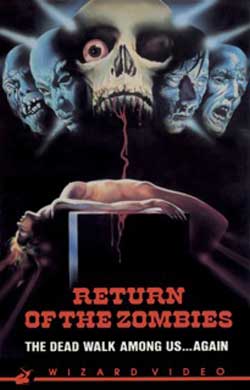 Horror legend and home video pioneer Charles Band had been putting off his warehouse cleaning for years. But during a recent overhaul of his extensive collection of collectibles, he unwittingly resurrected a veritable treasure trove of vintage horror limited-edition VHS boxes coveted by horror fans and serious collectors. Starting February 12, fans will be able to purchase these original boxes with authentically duplicated VHS copies inside – at an incredibly reasonable price.

“Back in the 80’s, I thought it would be cool to release these films in the oversize VHS boxes,” explained Band. “In the short term, it was very successful – but by 1982 the trend had run its course and the titles were reduced back to regular VHS dimensions.”

TITLES INCLUDE SUCH HORROR CLASSICS AS: ZOMBIE, I SPIT ON YOUR GRAVE & HEADLESS EYES

Band started Wizard Video in 1980, and was the first to release horror cult films such as Halloween, Texas Chainsaw Massacre, and I Spit On Your Grave in the early days of home video.

“The kids who remember these oversized packages remember them fondly,” Band continued. “The release of this collection is for them.”

Over a span of 3-4 years, Wizard Video published eighty titles in the large-format boxes. Thirty-five years after the packaging’s popularity died out, Band and his excavation team uncovered the original big VHS boxes of thirty-six of these rare titles in mint condition, between twohundred to four hundred copies per title. Each box will be hand-numbered on the spine and autographed by Charles Band and will include an authentically duplicated VHS copy of the film inside of a clamshell holder. Band estimates that very few of these rare videos are still in print – and no more than 5-10 thousand units were manufactured at the time. 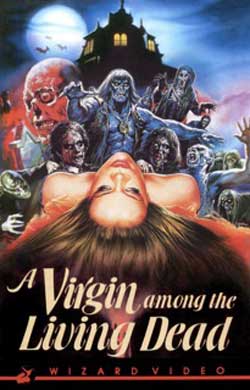 Also found in the collection were original boxes of the first horror video games on the planet, from Wizard Video’s sister company, Wizard Video Games. The Atari 2600 game boxes for Texas Chainsaw Massacre and Halloween will be released TBD 2013 from Full Moon. At the time of release, these titles were deemed too violent for children, and were either banned or sold by request-only, making them an extraordinarily rare find as well. 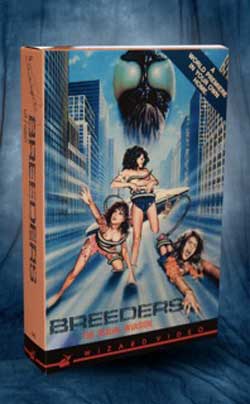 Every month beginning February 12, 4 titles will be on sale at $50/title.

APRIL
I SPIT ON YOUR GRAVE
BLOOD CASTLE
MANDINGA
TORMENTOR 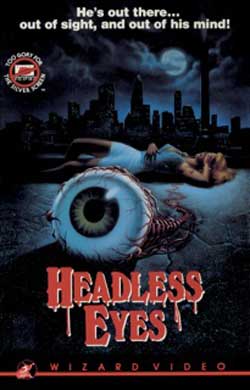 About Charles Band & Full Moon Features
Charles Band founded MEDA Home Entertainment in the late 1970’s, one of the first independent video distribution operations in America. With the foresight that home video was the future, a vision few others shared, he helped pave the way for the colossal home video boom to come. In the 1980’s, Band produced such hit cult favorites as Ghoulies, Re-Animator, The Dungeonmaster, Dolls, Troll, Robot Jox, and many more.

Band founded Full Moon Features in 1989 following the early 80’s success with Wizard Video, which released such cult classics as Zombie 2, The Texas Chainsaw Massacre, and I Spit on Your Grave on VHS. Wizard video was celebrated for their shocking and incomparable box art, especially after their switch to the “big box” format.

Band soon teamed with Paramount Pictures and Pioneer Home Entertainment for direct-to-video releases on VHS and Laserdisc. With upwards of twenty releases per year, Band has also built a reputation as a prolific and frequent director of entertaining low-budget genre films. In all, Band has produced almost threehundred features variously delving into the realms of horror, sci-fi, fantasy, and family films under its Moonbeam Films label.

The Puppet Master series is considered to be Band’s most celebrated and popular franchise. The latest installment, Puppet Master X: Axis Rising, is the 10th film of the most successful direct to video horror franchise of all time. Full Moon has created many other well-known franchises such as the Trancers series, starring Helen Hunt and Tim Thomerson, theSubspecies series shot on-location in Transylvania, Romania, as well as Dollman, Demonic Toys, Killjoy and The Gingerdead Man (starring Gary Busey as a killer cookie!). Full Moon’s recent releases include the Blaxploitation horror film Ooga Booga starring veteran actors Karen Black and Stacy Keach, the Blu-ray release of the critically acclaimed vampire series Subspecies, and two new grindhouse releases including Riot in a Women’s Prison and SS Hellcamp.

Full Moon titles can be found at all major video retailer outlets, Red Box, and Netflix. Warner Digital distributes Full Moon films for North America on Pay Per View and Video on Demand, including Comcast, Time Warner, and AT&T U-Verse. Full Moon movies are also available from sources as diverse as Walmart, Amazon, iTunes, Prescreen, and FlixFling. In addition to feature films, Full Moon is also very active in creating andmarketing a wide variety of merchandise including original action figures, resin statues and 1:1 scale replicas of its better-known puppets and dolls.