Home | Interviews, Poster And A Trailer For PHANTOM

Interviews, Poster And A Trailer For PHANTOM

Here’s something new. A haunted submarine. Has that even ever been done before? Nothing really pops into my head when I try to think of haunted sub movies. I guess it doesn’t matter cause there is one heading our way now.

It’s titled PHANTOM and stars David Duchovny and Ed Harris and here is your official synopsis:

Synopsis
Suspicion between the superpowers is at its peak, and the Americans are staging a mass Naval exercise in the Pacific. To observe the maneuvers, submarine Captain Dmitri Zubov, an experienced sailor but a man troubled by a past he struggles to live with, sets sail on what is the final mission of Soviet submarine B756. Armed with multiple torpedoes and a single tactical nuclear ballistic missile, the sub is also fitted with a cloaking device that can render them invisible to the Americans.

When B756 fails to make a position report – the last that is heard from the sub it was 500 nautical miles NW of the Hawaiian Islands – Fleet Command classifies the vessel as missing. Fearing Western retaliation, they send their entire fleet after B756.

Meanwhile deep under the Pacific Ocean Captain Zubov and the ship’s crew of the B-756 uncover a plot that will destroy humanity. Zubov is determined to foil the plot, but as the sub is pushed to its very limits and air supplies diminish, he and the crew face almost impossible odds and an increasingly unsettling sense that they are not alone…

Some interviews with the two stars surfaced on line today, first up Mr. Duchovny:

And then Mr. Harris:

One more video for you, check out the trailer:

And of course, the poster art: 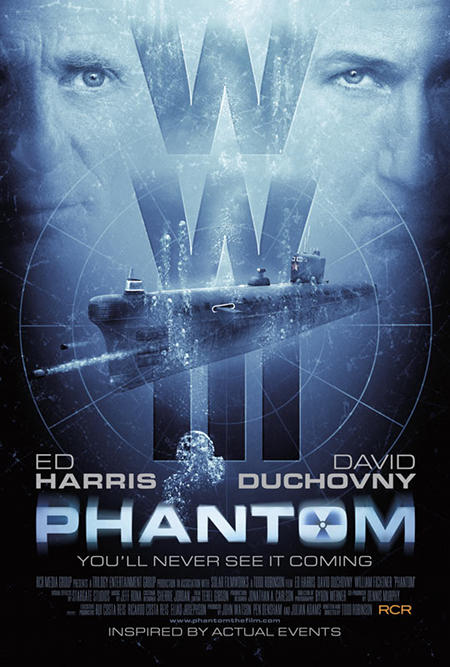