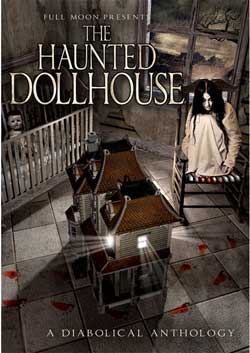 An anthology of horror tales, each involving malevolent dolls.

Love him or loathe him, Charles Band is a leading figure in genre cinema. Admittedly his output varies wildly in quality but I could never bring myself to dismiss a man who gave the world a gem like TRANCERS. In recent years Band has largely been confined to working on video and a cursory look at some of the titles he has been involved with, either as director or producer, appears to indicate he’s operating at a level quite some distance down from his glory days in the 1980s. 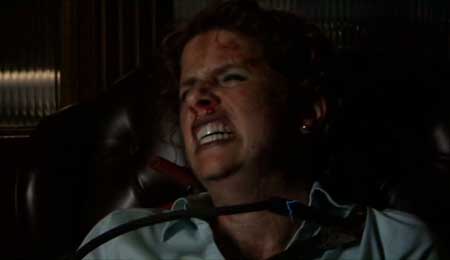 So it was with some trepidation that I started watching THE HAUNTED DOLLHOUSE, one of Band’s most recent efforts. I knew very little about the film going in, other than that it was an anthology horror movie, because unusually the film doesn’t (at the time of writing) have an entry on imdb. No matter, I thought, this one’s obviously brand new.

The film gets straight into the first tale – The Protectors – without bothering with a wraparound story. A movie producer and two colleagues arrive at the gate of an imposing Italian villa and ask the owner if he would be willing to let them use his house as a location for their upcoming movie. He’s not interested but his enthusiastic daughter manages to invite them in for dinner and a guided tour of the historic building. However, it turns out that the trio are cat burglars and are simply casing the joint with a view to robbing it that night. But what they haven’t bargained for are the elemental spirits that guard the house from evil… 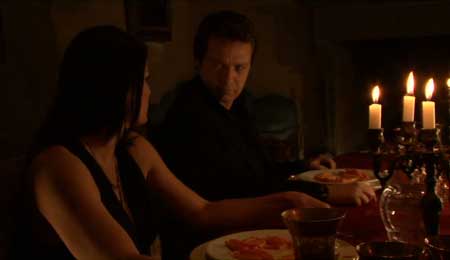 The second tale – Worry Dolls – is set in a women’s prison and concerns a pretty young inmate Eva (Jessica Morris) who has a whole heap of worries to contend with. Not only is she involved in a feud with fellow inmate Killa Kim, she’s also being regularly abused by depraved guard Carl (Anthony Dilio) who forces her to perform in amateur P*rno movies. And as if that wasn’t enough, she’s fallen foul of tough prison warden Mrs Ivar (Deb Snyder). Luckily though she has her worry dolls that her daughter gave her, and one night she does as her daughter instructed and whispers her worries into the little figurines and stashes them under her pillow. The following morning Eva seems full of energy and ready to confront her troubles once and for all…

The third and final tale – Dangerous Toys – is a comedy horror about a foot tall detective from outer space (I know, I know but it’s Tim Thomerson so who cares!) who teams up with a similarly shrunken nurse (Melissa Behr) and a regular sized cop (Tracey Scoggins) to defeat a gang of demonic toys who it seems are intent on raising the devil. Tracking their quarry to where else but a toy factory, our pint-sized heroes engage their foes in a climactic and explosive showdown. 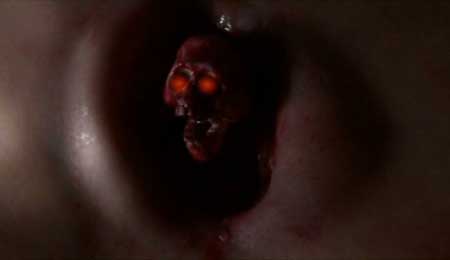 It was only after a visit to Charles Band’s company website that I realised that THE HAUNTED DOLLHOUSE isn’t quite what it purports to be in that it isn’t a new movie at all. What it is in fact is three of Band’s earlier movies, each cut down to half an hour and cobbled together to make an anthology movie. The reason why it doesn’t have its own imdb entry is that all three of the full length movies have their own entry. For the record they are: SKULL HEADS from 2009; DANGEROUS CHUCKY DOLLS from 2008; and DOLLMAN vs. DEMONIC TOYS from way back in 1993.

It’s a bit crafty of Band to recycle old product like this, especially as some of it is twenty years old. But then again the whole independent movie scene, especially horror and grindhouse flicks, was founded on stealing ideas, stories and even footage from earlier productions so I guess it’s acceptable. What’s not acceptable though is the quality of this recycled stuff. The first two tales are terrible and I was just glad that I only had to sit through the half-hour versions rather than the entire features. The third is the best, partly because it has the best cast, partly because it obviously had higher production values even then, and partly because Band’s best work is quite obviously behind him. So my advice would be the give this movie a miss but, if you have 90 minutes to kill, watch the full length version of DOLLMAN vs. DEMONIC TOYS; Tim Thomerson is really only playing a variant on Jack Deth but he’s so good at it that I never get tired of watching him do it.