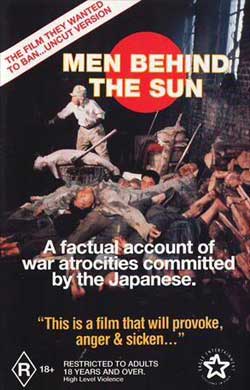 Men Behind the Sun is a fictionalised account of war atrocities perpetrated against Chinese and Russian people by the Japanese during World War 2. Unit 731 is a secret facility which conducts biological and other medical experiments on both animals and humans. The film focuses on the experiences of the last youth corps to join Unit 731 before it was closed down immediately following the surrender of Japan to the Allied Forces in 1945.

The first Category III Hong Kong film, Men Behind the Sun is a harrowing excursion into the depths of state sanctioned depravity and there is no surprise therefore that much of what is shown here is resonant of what we know happened in the camps in Nazi Germany including medical experimentation and the mass murder of millions in the gas chambers. Here we see a young mother, her young child and a bird tied to a chair, fighting not to breathe in poisonous fumes which are being dumped into the room that they are imprisoned in, while scientific notations and timings are taken by the doctors watching. In a later scene, we see the mass extermination of the remaining victims in a makeshift gas chamber, which is given poignancy as a young man uses his own blood to document the atrocities perpetrated at Unit 731 in order that their suffering and deaths should not be forgotten and the culprits go unpunished. 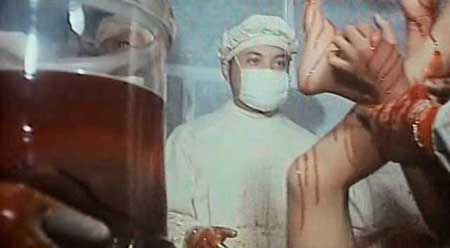 By focalizing much of the narrative through the perspective of the new young recruits, or Youth Corps, Mou shows how brutality is able to spread given the right conditions and the mechanism through which a process of dehumanization is the precondition for its spread. The prisoners in the camp are termed ‘maruts’ (this is the subtitled translation in the version that I saw and as such it is difficult to know whether it is has a cultural meaning outside of the usage of the word in the film). 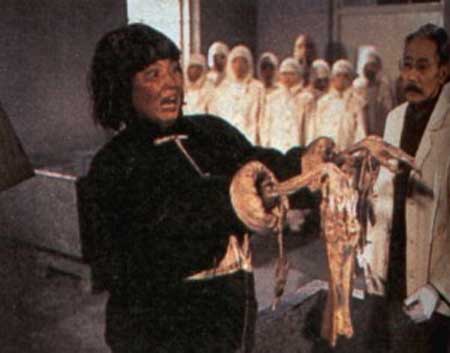 At one point, the members of the Youth Corp are asked to name one of the prisoners, or indeed to state ‘what it is’. The first boy replies ‘A human’ only to be beaten for doing so; the second boy says ‘A Chinese Man’, while the third qualifies it ‘A bad Chinese Man’, and both also receive beatings for their responses. Instead they are told ‘This is a marut. It is a log for the fire or making coffins, it is material for experiments.’ This process of dehumanization, as historical evidence tells us, allows the abhorrent treatment of the ‘Other’ who is constructed as less than human, as vermin and/or other animal/insect species.

This process not only dehumanizes the Chinese and Russian victims but at the same time takes away the humanity from the Youth Corps as they are indoctrinated within the ideological system in which the survival of the Empire demands sacrifice in order to perpetuate itself. The aim of Unit 731 is to design a biological weapon, many times more powerful than the Black Death, in order to wipe out enemies of the Empire, and we see in graphic details the results of such experiments, from exploding intestines, to splattering body parts and blasted limbs. 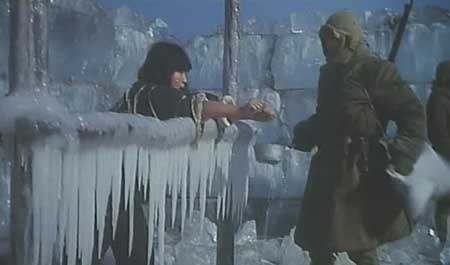 One of the more horrific experiments carried out takes place in the aptly named Frostbite experimental room, where victims’ limbs are frozen before being shoved into boiling water and the skin peeled off and/or beaten until the limb itself shatters. Unlike some examples of extreme cinema or what is often called ‘torture-p*rn’, the politics of Men Behind the Sun are clear with the Japanese flag utilised as backdrop or prop in scenes of extreme cruelty – the most significant perhaps is the death of one of the prisoners who tries to escape only to be stopped when the flagpole is shoved through his neck and the red and white of the flag frames his dying body as he takes his last breath. 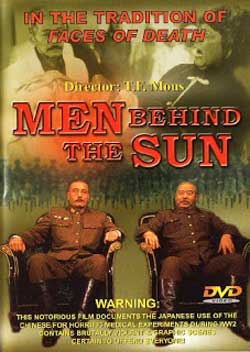 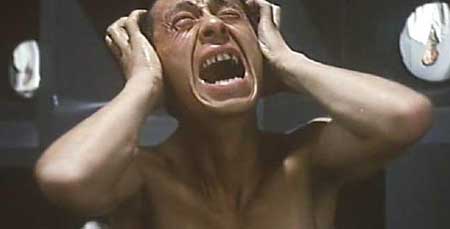 While Men Behind the Sun is largely xenophobic, we do see glimpses of humanity among the Japanese, most poignantly shown in the relationship between members of the Youth Corp and a young mute boy with whom they play ball. The ball itself is a master metaphor for the loss of childhood – the film begins with the loss of a ball by some of the young Japanese who in going to retrieve it are punished, with one of them being electrocuted as he tries to climb the fence that surrounds the facility as bullets hail around him. Later, the mute boy’s ball is tossed among his dismembered body when his corpse is being taken to the crematorium. It is this poignancy, and moments of humanity that we see amidst the horror, that separates Men Behind From the Sun from some of the worst excesses of exploitation cinema. 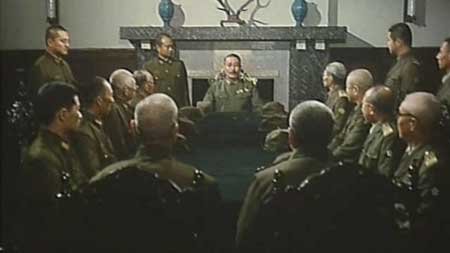 However, despite some reviewers’ protestations to the contrary, nothing excuses showing real-life animal cruelty –from my research it seems that the scene in which a young cat is thrown into a pit of rats to meet a torturous and graphic end is in fact real – irrespective of whether it functions to highlight the brutality of the Japanese soldiers and/or the fact that the victimized can turn on their oppressors. This is simply inexcusable, full stop. The second scene which has been subject to critical discussion and dispute is when a young mute child is subjected to a living autopsy in which his organs are removed one by one while he is still alive – here supposedly the body which is seen being harvested is a real corpse and was procured by Mou in order to add authenticity to the proceedings. I have fewer problems with this than with the animal cruelty, and Men Behind the Sun is not the first, and certainly will not be the last, to use dead bodies instead of simulated cadavers. This may well be tasteless, but certainly it is not immoral or unethical as in the scene with the cat and the rats, or indeed the burning of the rats when the medical/military installation is being razed to the ground. 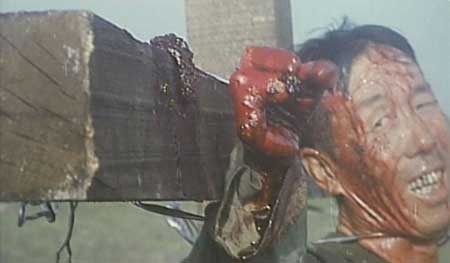 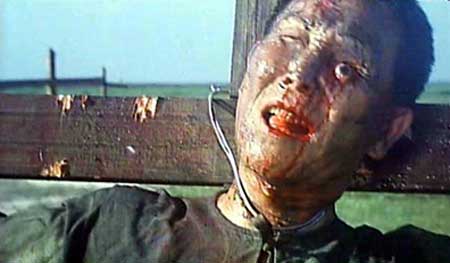 It is a shame that Mou had to resort to such cheap shock tactics, as such tactics detract from what is a powerful piece of cinema about man’s inhumanity to man and the insidious nature of state sanctioned genocide which infects all concerned. For me, a film such as Men Behind the Sun has much more of an impact than more official ‘sanitised versions’ of human atrocity such as Schindler’s List in that it does not try to sugar-coat the past, in that it ‘shows’ rather than ‘tells’ and allows no room for distanciation or intellectual contemplation. We are brought face to face with the full horror of war, and the ends to which some regimes will go in order to ensure their survival despite the human costs: it sickens and appals us as it should. I find it difficult to recommend Men Behind the Sun because of the scenes of animal cruelty, although I do acknowledge it is more effective piece of cinema than many other similarly themed exploitation films and that there is a political message contained in the film that is as important today as it ever was.