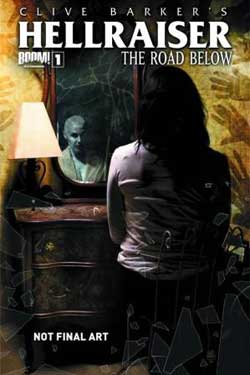 Just when we thought the ride was over, emerges another horrific Hellraiser offshoot in this 4-part comic book series from Boom Studios.

Written by Brandon Seifert, with artwork by Haemi Jang, we begin a new tale titled: “Hellraiser: The Road Below” Issue #1. Leaving off with Kirsty Cotton who has since joined the ranks of hell sporting a fine crown of pins, we find her questioning her purpose over Hell’s dominion and her first days among the damned.

Stepping back, we meet Rhea Wolfe and her daughter Cordelle. Rhea works at a metaphysical antiquity store and is somewhat of a witch herself. We assume it’s a front to protect the dangerous things that others need “not” encounter. Upon visiting a graveyard, she is approached by a man/monster named Joseph Nethercoate. Joseph announces he has erased the entire Wolfe family as payback for his wife’s death, Marine. His quest ends with Rhea and her daughter

The fight begins in this “somewhat ambiguous” start to the tale. Cordelle who can’t help but dink about in her mother’s store, is in danger from far more diabolical things. Things that Rhea is trying to keep out of circulation. It is upon this note that Cenobite Kirsty Cotton appears with a summon from Rhea, who is ready to sell off her soul

In the tradition of crazy hell world antics, we begin out new journey. This issue begins on a far less horrific note than some of the other HR issues, however as we have learned, it is only a matter of time.

Stay tuned for 3 more exciting issue to round up this tale.