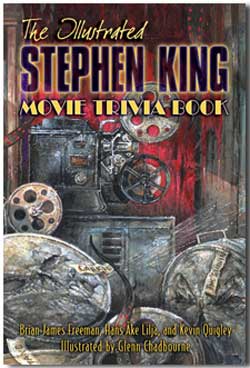 It’s always a great joy to receive another Stephen King focused book. It’s an even greater joy when its written in a way that you can use to be engaging or even entertaining. “The Illustrated Stephen King Movie Trivia Book” is one such book that presents all sorts of questions on Stephen King film work. In fact it’s so “just off the press” that it includes a chapter on “every” Stephen king film ever made up to today (2012). Artist Glenn Chadbourne” has contributed a fantastic collection of 50 illustrations that can be found within each chapter. The illustrations themselves are also a part of the fun here with a movie question beneath each. But in short, very cool ink pieces that capture the King mood perfectly.

With an introduction by Mick Garris in place, you are off to a true horror fan experience. Each film is presented with a series of questions (around 10-20…give or take) which include the answers at the end of each chapter.

Each is designed to poke at your “know how” of King film trivia with a series of movie questions that are derived from the films background, premise or points of interest. For instance you can find both versions of “The Shining films within that ask you questions only relative to “those” versions. An example might be, “Where was the outside of the “Overlook” filmed? Which could turn around later and ask you about the interior setting. Or maybe the difference in locations between the 2 films (Shining movie and Shining TV Movie). Famous dialog, film moments, and plot reveals all make up some of the questions within.

It’s a great way to sit with “film savvy” friends to engage them on their King expertise. I also noticed that many times questions would arrive in the form of “those” that a horror fan might only know..like, Who’s hand is coming out of the grave at the end of “Carrie”?

The format is set up with 4 answers for each movie question. The movies are presented in the order of year released, which you’ll notice takes you right up to the 2011 release of “Bag of Bones”. Some of the questions are within common knowledge grasp like “What was Carrie’s special power?” While others are designed to really push you limits of film attention detail such as “What book is Amanda’s mother reading in bed?” (in reference to the film “Cat’s Eye”)

One big takeaway idea here is to sit with your friends and family and watch a Stephen King film. Then afterwards challenge the group to answer the chapter’s questions to test their film memory skills.

What King fans might find of interest here is that the book also features a small chapter on “Dollar Babies”. These are the short films and such that only need to contribute 1 dollar to make a short film based on King’s work. Another chapter asks questions on the “characters” of King films….cool stuff indeed! Though my biggest surprise was seeing a few smaller chapters devoted to those “not so popular” Stephen King sequels like “Lawnmower man 2″, Mangler 2” and “Carrie 2”

In short, a fine read and worthy addition to any horror genre or King fan library! The book is published by Cemetery Dance Publications who have also released a sister book “The Illustrated Stephen King Trivia Book”