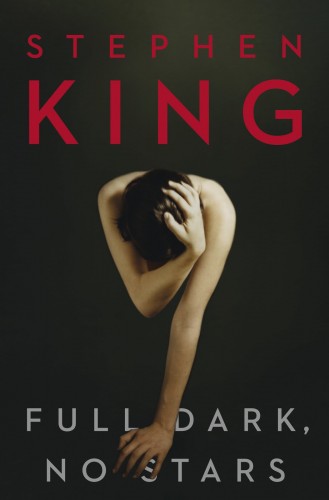 -A collection of four novellas with a central theme of dark redemption.

1922: 1st person point of view through the eyes of Wilfred James, a confession of diabolical murder of his nagging wife.

Big Driver: Tess, a mystery writer encounters a sinister hand when her car breaks down.

A Good Marriage: Darcy discovers a macabre secret her husband has been concealing beneath a stack of girly magazines.

Full Dark No Stars is a staggering depiction of accurate time frames from customs, apparel, etiquette, vocation and even human behaviour. King’s sense of comprehension of historical elements make a much more versatile read among a much more universal audience luring us deeper into the sanctum of the unknown, our very darkest desires.

The common theme of retribution makes a stronger sense of enthusiasm in devouring each adventure after the next. Not only do we find ourselves cheering on Dave Streeter or Darcy or Wilfred James’s son, we become the character relating our own personal turmoil and triumphs. The author’s unprecedented gift for relating to the common man is eerie, a near psychic sense of what makes us tick.

The format of four novellas is one not often explored for King. Certainly he’s dabbled in novels, short stories and mammoths of creation, yet the novella format is a welcome changed that hasn’t been dabbled in since Hearts in Atlantis. Four Past Midnight and The Bachman books is another prime example. Each were such undeniable hits, a number of endeavors were adapted for the silver screen to varying success. The stories within Full Dark are no exception as any one of the tales could easily translate with a director’s perception for an even larger audience to ravenously devour. The novella format is consumed with vigor, each page whipped past in a frenzy faster than the next. It keeps the interest level high and intrigue immeasurable for die hard King fans and new comers alike.

King’s portrayal of dark, repressed almost primal emotion is realistic in each of us preying upon our most haunting fears; fear of ourselves. Each tales provokes a deep seeded secret for disclosure that we’ve all possessed and tweaks each indiscretion into full blown exploited terror, zeroing in on the suspended ‘what if’ factor.

Such brilliant, admirable story telling evokes a sense of bitter sweetness within the reader emerging upon the final pages as a unanimous epiphany is reached that we simply do not want the adventure to end.

1922 was nominated for the 2011 British Fantasy Award for best novella while Full Dark No Stars received the 2010 Bram Stoker award for best collection. Amazon placed the book number 25 on the year’s top 100.