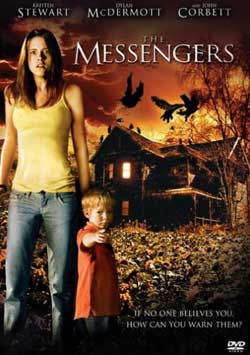 Having moved to rural North Dakota for a fresh start, a young girl has trouble convincing her parents that their new home is haunted.

Speaking as a forty-something I have to confess that I find the success of Kristen Stewart somewhat mystifying. She has played the same part in all of the films I have seen her in to date: a sullen, uncommunicative teenager. Quite how this is enough to propel a young actress to superstardom is beyond me but I suppose what her success demonstrates is quite how geared towards the teenage market the film business is currently. In the Pang Brothers’ THE MESSENGERS Stewart gets to top line her own horror movie.

As so many horror films seem to do these days THE MESSENGERS begins with a prologue sequence, in this particular case one that shows a family being terrorized by an unseen menace in their remote farmhouse. Having despatched the mother and daughter this presence then tracks down the youngest child, a small boy cowering at the back of a kitchen cupboard. The film then jumps forward in time as a new family moves into the same house. 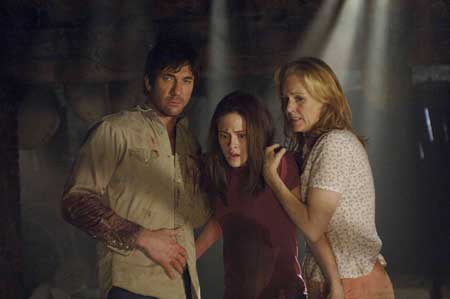 Roy (Dylan McDermott) and his wife Denise (Penelope Ann Miller) have decided to try to put recent problems behind them and make a fresh start in North Dakota in the agriculture business, specifically growing sunflowers. In the back seat of their station wagon are daughter Jess (Kristen Stewart), a typically truculent and monosyllabic teenager, and infant son Ben. Almost as soon as they arrive they begin to experience odd incidents such as recurring damp patches on the walls, strange noises on the upper floors, and singularly aggressive crows.

Despite this, Roy is convinced he can make a go of the sunflower business and even takes on a hired hand in the form of affable drifter Burwell (John Corbett, looking like a cut-price Jeff Bridges). One evening while Roy and Denise are out and Jess is looking after the baby she is assaulted by a spectral presence which also trashes the furniture. However, by the time she has made it outside and called the police the house looks undisturbed. All of which sets up the classic premise of a lone figure unable to convince others of what she has seen. The only person who is prepared to listen is local boy Bobby (Dustin Milligan) and together they attempt to piece together the story of the former owners of Jess’s house. 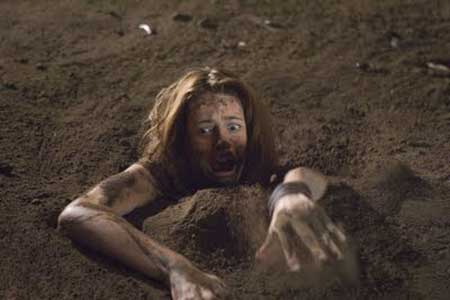 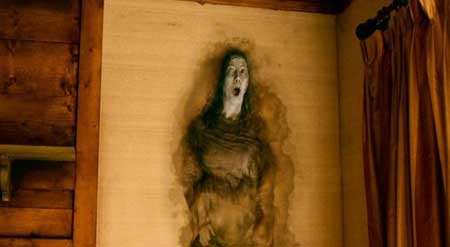 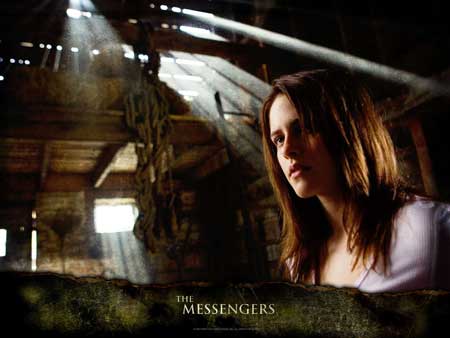 There’s absolutely nothing in THE MESSENGERS that veteran horror buffs won’t have seen a dozen times before but then I don’t suppose this movie was made with us in mind. It’s aimed squarely at Kristen Stewart fans, most of whom probably haven’t seen a lot of horror movies and therefore to whom all of this is brand new and exciting. As for myself, I was ticking off all of the standard horror movies tropes as they passed predictably by. There’s nothing wrong with the movie as such, it’s professionally done, has a dependable supporting cast and the effects are decent, but neither is there anything outstanding or even memorable about it.

Unforgivably though, the film pulls its punches. I totally get that it’s a relatively high end production aimed at teenagers and therefore isn’t going to be packed full of beheadings, disembowelments and flayings but what little horror there is is utterly toothless and bland. It’s rather like deciding you’re going to tell someone a dirty joke and then censoring all the offensive bits out as you’re telling it; in other words, pointless. 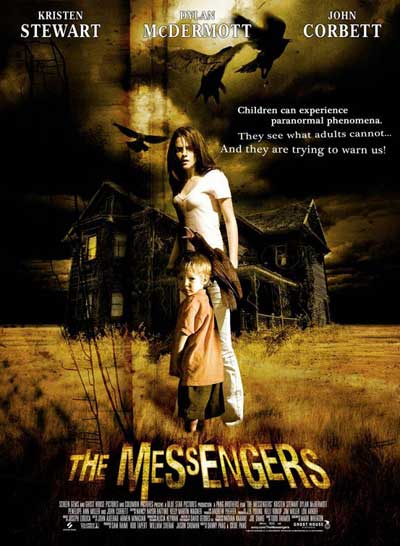 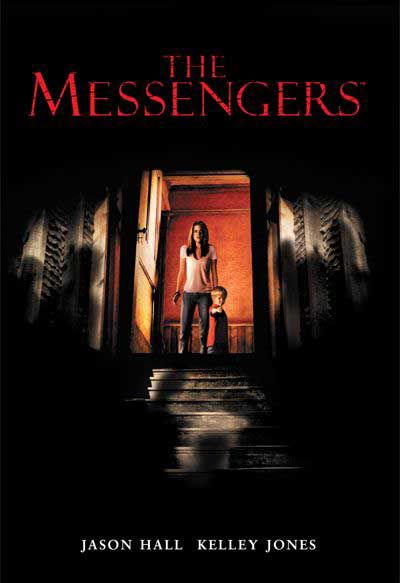 One final point to note is that having taken great care to set up their situation, about an hour of screen time in fact, the Pang Brothers then wrap things up in less than half an hour. It’s incredibly abrupt and I would venture to suggest that there was a lot of hasty work done in the editing room prior to release. It’s entirely possible that this was done to get the film in at around the 90 minute mark for the ‘benefit’ of the target audience. I don’t blame teenagers for this: they go to the cinema in large numbers and that has to be good for film-making. I just wish they were credited with a little more intelligence; movies aimed at the younger market don’t necessarily have to be dumbed down, as anyone who has watched modern animated features film can tell you.

The Messengers is now available on Bluray per Mill Creek Entertainment