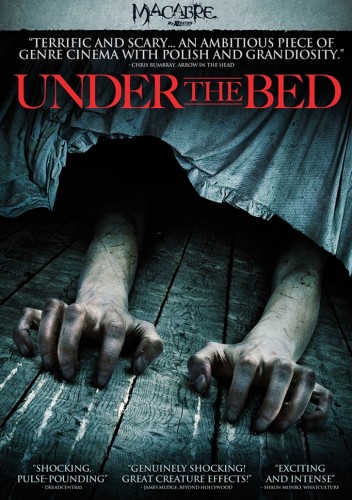 Troubled teen, Neal Hausman (Jonny Weston) returns home after spending two years away from his family after his mother’s fatal accident. Reunited with his younger brother Paulie (Gattlin Griffith), Neal discovers that the demons he thought were just dreams are not only real but still haunting his home and terrorizing his brother from the shadows in their room, from the horror under the bed.

Steven C. Miller continues to prove he is a director to keep an eye on with his latest release, Under the Bed. As he did with his other features, The Aggression Scale and the recent Silent Night remake, he handles the varied genre material like a seasoned pro. The action is tight, the acting is above par, the thrills are aplenty and the films are interesting and entertaining. Unfortunately, he has yet to hit a home run…just yet. Under the Bed is another solid turn at bat but suffers the same fate, lacking that special ingredient that makes a film stand out. Damn close though. The film is a nod to the Eighties Amblin teen films carrying a heavy influence of Joe Dante. In fact, Under the Bed makes for a spot on double feature companion for Dante’s similarly themed and executed The Hole. Unfortunately Miller’s variation to the family horror feels too made-for-TV for its first two acts to delight seasoned horror fans. With the third act, however, the film does a monster-filled somersault into pure gore and terror. Under the Bed looks great with acting that feels authentic and invested along side special effects that deliver gore and grue. Somehow, though, the film lacks the heart and the energy to propel it substantially above the competition, almost, but not enough. 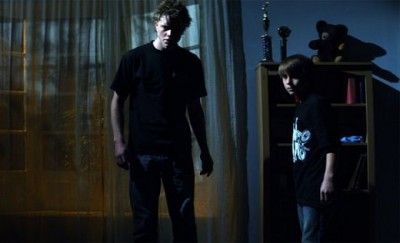 Under the Bed features a pair of gifted young actors playing two brothers shackled with a dysfunctional family and something horrible living under their bed. Jonny Weston stars as the older brother, Neal Hausman who, after the death of his mother, has spent the past two years living with relatives away from his father and brother. With his father now remarried and his younger brother older left alone to deal with the horrors left behind, Neal returns home to face the demons haunting his dreams, living in the shadows. While father continues to dismiss anything Neal has to say, his brother, Paulie, has adapted, learning how to deal with the unseen creature. Gattlin Griffith portrays Pauling and the two actors have an instant connection and chemistry. Like many of the films from the Eighties this fuels Under the Bed’s tone, the kids are far more interesting and authentic then the adults that surround them. This works to keep the Neal and Paulie the focus of the film, even when things get insane in the final act.

With the boys being such a strong focal point of the film, the adults become thin caricatures, mere stereotypical suggestions of parents and neighbors. The father is a complete tool to both kids in an unrealistic and unappealing manner. As played by Peter Holden, Terry Hausman is continually the antagonist for the first two acts, in constant confrontation with his boys. It’s a little much without substantial background to fuel his anger. However, he is provided a marvelous scene later in the film where he reacts to the eldest son remarking “he should have died with his mother.” With this scene, Peter Holden displays his talent giving the character pathos, inner-turmoil and pain – showing the character can think, even when enraged. Terry’s second wife Angela fairs a little better than the rest of the adult cast. Musetta Vander gives the step mother a concerned but helpless quality (and later a great deal of strength) that is sympathetic to the boy’s plight. She’s always the calming factor when the household erupts. It’s the clear reason that when the beast begins to claim its victims in the third act that Vander’s Angela is the only character the audience wants to survive. 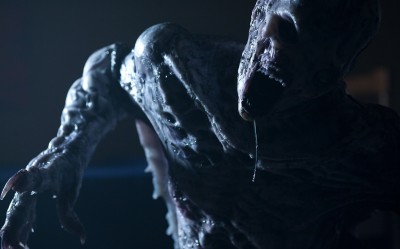 The film admirable takes its time getting to the monster, the beast under the bed hinted at throughout the film. For most of the film, it is left to doubt that there is any such creature. It may not actually exist outside of the young boys’ overactive imagination. However, that is not the film Steven C. Miller has set out to make with Under the Bed. There is a creature for the monster movies fans drawn to the film’s title and marketing and the film delivers in its hokey Eighties Amblin Pictures horror tropes. And then the bloodshed begins. The creature stalks through the house picking off the cast, one by one, in glorious red gruesome goodness. In the final minutes of the film, Steven C. Miller pulls back the curtain and gives you the film he’s been wanting to present all along, a souped up version of a child’s nightmare.

Under the Bed is more a near-hit than a near-miss, meaning that it is better than the underwhelming aftertaste suggests. The film-makers call the film a “suburban nightmare” and that is an succinctly accurate description. Unfortunately, it’s a little too heavy on the “surburban” without enough “nightmare” until it is almost too late. The beginning two-thirds plays entirely too close to Saturday afternoon movie-of-week fare. The father is too high-strung making him a buffoon and the neighbors are straight out of the latest Disney TV show, bland and silly. It’s nearly unbearable. Thankfully, Jonny Weston and Gattlin Griffith as the two leads are extraordinary and make for realistic, believable siblings. Steven C. Miller shows he has what it takes to make a great horror film with Under the Bed, it’s now just a matter of his finding the right material. There is a great film in this guy, Under the Bed is not it however. As stated earlier, damn close though.