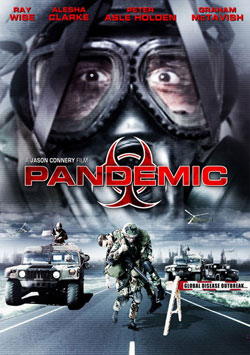 A slow-paced, action thriller about a virus that strikes a New Mexico county and the local veterinarian who gets caught in the middle. With a very quick response time to the infected county after a call was made to the Center Of Disease Control, the presence of the U.S. military has the locals thinking conspiracy theory. The vet must pair up with an eccentric rancher who has ideas of his own of what the government is up to, so they can expose the threat and save humanity

Pandemic is a term thrown around alot these days. With talks of conspiracies, reports of swine flu, bird flu and who knows what else…it has become a reality that is not mere fiction anymore. We’ve had our share of virus movies and government cover ups, but it doesn’t mean that trend is slowing down. Our latest film arrives from MTI directed by Jason Connery.

As most of these films originate, this one starts with a man who collapses from some kind of illness that transforms before our eyes into a lethal infection and soon death. We can be pretty sure at that point a few things will happen. The infection will spread, scientists will ponder and the military will quarantine the area.

Well look no further all that and more. Alesha Rucci who plays the strong willed and determined local vet Sydney Stevens is hot on the trail after being introduced to an ailing horse who contracted this unknown virus. The virus which is like none she’s seen before is pretty effective. It rapidly advances causing boils, veins bulging and a deteriorating type skin lesions. No sooner does she go back to her lab to do research on this discovery, that the TV broadcasts a local message from Doctor Green who has also discovered this new outbreak. Who do you call? The CDC of course…as any viral infection needs the proper eyes and ears to determine what it is and how to fix it.

It takes a whole half hour and the tanks start rolling in. Led by actor Ray Wise who plays General Matthews and Graham McTavish who plays Capt. Riley, its clear that they mean business and no one is getting out until its fixed. Set in a New Mexico county, the locals are easy prey as a potential test area for viral outbreak testing. Actor Peter Holden plays the role of Spenser who we can’t quite figure out at first on his notions of what is taking place. Sydney, a somewhat close friend gets stuck between what she believes and what she is told. In fact the idea has a certain X-files like presumption that is in the heart of anyone who watches too much TV these days. What is the truth and what is the purpose?

This all comes very clear with an outcome that many would suspect. Though as a product the film holds its own and gets the point across. FX used work for the film help sell the idea from a visual aspect. The film borrows ideas from previous known films like “The Crazies”,”Andromeda Strain”, and “Outbreak”.

The film is actually a well done piece of fiction based on reality based on fiction. The timing is probably right on as well as we all run to our nearest pharmacy to get our preventive injections. Even as I type I hear of conspiracies predicting god awful theories based on governments control factors. More frightful is the fact that I’ve gotten the injections myself.

While I don’t share the symptom of film releases, the ideas are hitting pretty close to home. Pandemic might seem like an easy stab at societies paranoia, but then again some of the best films are. Pandemic is a thrill ride of epic proportions. Maybe we are not zombies quite yet but theres no saying what the future holds and how fast the fiction is no longer fiction.