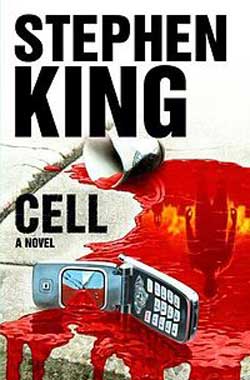 Our story follows a New England artist, Clayton Riddell and his journey to find his family after an ominous broadcast signal has infected cell phone users turning them into ravenous, carnivorous animals.

The master of terror telling, Stephen King is often criticized by horror fans in recent years for having lack luster releases. Many feel his best efforts are behind him. I tend to have to disagree. King has not forsaken his crown. I feel he’s simply matured and broadened his literary talents. One cannot deny his talent for composing compelling drama, fully capable of creating a story outside of his proven genre. Certainly efforts such as The Body (written for film under Stand By Me), Shawshank Redemption, Dolores Clairborne and The Green Mile are testament to his diversity. Cell is no exception striking both fear and sorrow into the hearts of first time readers and die hard fans alike.

Cell is essentially a tale of flesh eating zombies, unconventional by anyone’s standards. The infestation or infection if you prefer transpires as a result of a global broadcast signal hypnotizes cell phone users into a rabid like attack mode with an insatiable hunger for human flesh. It’s creepy, spine tingling terror at its best translating well unto a society absolutely fixated upon cellular phone use.

The true irony is after witnessing hordes of morning commuters on a daily basis in a hypnotized drone, glued to texting on their varying cell’s I often wondered if there wasn’t some sort of semi-fictional account already in print to back up my theories. King is seemingly cut from an old school cloth and our opinions on technological gadgetry tend to relate to one another. The New England author does not have a cell phone nor has any intention of possessing one anytime soon. I pay homage to this eccentric stand, refusing to own one myself.

Taking place in Boston, a much different locale compared to his regular choice of Castle Rock, Maine or Derry the setting is quite obviously well beyond the Romero/Russo era of Night of The Living Dead. Yet at the same time I admire King’s efforts this time around having capitalized on a runaway smash hit genre well before The Walking Dead, Zombieland or countless other zombie related ventures were embarked upon.

Clayton Riddell is our lead protagonist estranged from his family yet desperate to get in touch with his wife and son to share his blessed news of just signing a deal to publish his graphic novel series. Before the ink is even dry upon the contract, all hell breaks loose on the streets, in Boston Common as we witnesses two teens attack one another and an elderly lady lunges at an ice cream truck driver. Instantly we sense Clay’s regret and empathize with his estrangement luring the readership deeper and deeper into the story.

The use of current cultural references attracts a much younger and more diverse audience as well. Technology, as well as a primary gay character, society’s overall fixation on social media is all essential plot elements broached upon effectively contributing to a stronger believability factor.

Although truly a master of his craft, King is not without flaw. He’s a little vague on his lead antagonist Harvard or sometimes referred to as the Raggedy Man. It’s unclear on how this character had arrived in such an important role. There’s little exposition or even back ground to where he had came from. He simply and suddenly appears one day having ventured into the mindless, monotonous marching drone that everyone else had. Perhaps a little more mystique would contribute to a sense of unease within the reader, allowing us to invest in such depravity. I found myself a number of times question why it was that I was investing so much into a seemingly pointless character.

There are at least some surprising, gruesome twists along the way that will not disappoint. King has always had a supreme gift for preying upon subconscious fears, the psyche forever churning suspense in spine tingling climax.

In the final act some readers may be disappointed at the dark, glib and pessimistic tone. If you’re looking for a happily ever after novel, you’ve definitely come to the wrong place. A great deal of time we’re so much in awe of the master’s story writing prowess that we never want the adventure to end, attaining a bitter sweet feeling upon leafing the final page. In the case of Cell I understand where some of the criticism comes from. There’s no question the end result will piss some fans off. For the rest of us, keep an open mind and you’ll be guaranteed to enjoy Cell.

Fun fact: It was just announced on Oct 31 2012, the film rights have been sold and actor John Cusack will be playing the lead role of Clayton Riddell. This is interesting of course as Cusack has played in two previous King adaptations, a small cameo in Stand By Me as well as the lead in the eerie poltergeist flick 1408.