Home | Music Review: Celldweller – Soundtrack For The Voices In My Head Vol. 02

Music Review: Celldweller – Soundtrack For The Voices In My Head Vol. 02 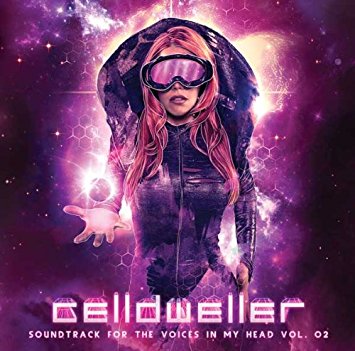 A long time favorite instrumentalist for me, The new CellDweller release may have just redefined the meaning of modern industrial music.” Nothing short of amazing” was the immediate reaction I had to this artist’s latest creation titled “Soundtrack for the Voices in My Head, Vol. 02″.

In a extremely powerful composed array of sounds and electronic ambience “Soundtrack for the Voices in My Head, Vol. 02” is the coming together of all the best traits in industrial, rock, soundtrack scoring, and game player music. In fact the first track “First Person Shooter” will simply knock you off your ass. I dare you to blast this track thru a loud stereo system as you might not come away without your hair standing on end. Surging bass, electronic anomalies, dark drones and symphonic overlays are just portions of what makes up these tracks. Each follows the next with its own purpose whether it begins on acoustic guitars, synthesizers or pounding beats…. it all cascades into something to sink yourself into. Tracks that follow include “Earth Scraper”, “The Wings of Icarus” and “ShutEmDown”, all equally as powerful as the next.

The release features 20 tracks by composer Klayton Scott who has had an impressive history of industrial releases starting back with his first release in 2006. I’ve listened and loved them all, though this release is purely a standalone achievement. You may have caught a Klayton track here or there as a backdrop to a film or 2. This release sounds like the scoring to a film you “wished” you’d seen, however I assume in this case that it’s the score that comes before the films (until studios catch wind of it, that is)

The rhythm’s are futuristically dark stomping every step of the way from a place of pure creativity and audio genius into a world of ambient soundscaping. As you make you way thru the tracks, it becomes clear that perhaps the music’s intention was to invent a self imagined user experience that moves from one instance of power tracking into calming tranquility and back again. At one point by pure immersion alone I began to “envision” giants walking sternly forward as they trailed their steps with worlds wrapped in chains flying behind them. Or maybe you take the future route with dreams of space vehicles exchanging blows under a darkened war zone. The level of imagination you can attach to this is endless.

My prediction is that creativity of Scott will not only attract game designers and film creators but a cavalcade of studio work that could align his efforts with the success that composers like Trent Reznor have attracted in the past.

Tags Celldweller Klayton Scott Soundtrack For The Voices In My Head Vol. 02